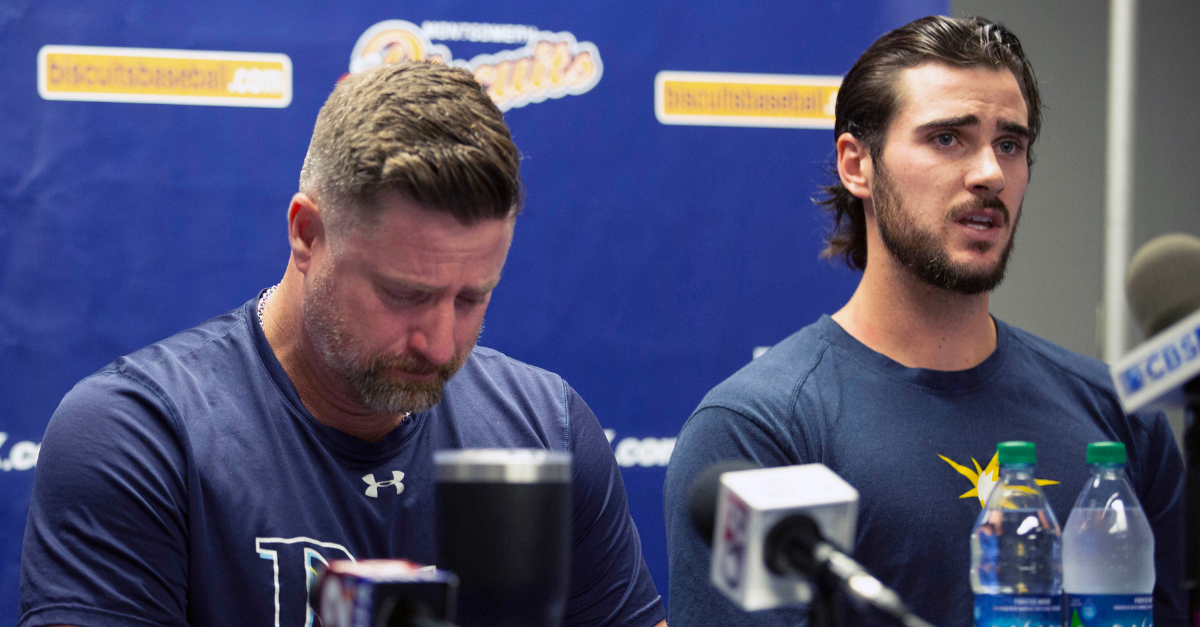 “My life as I knew it is destroyed,” the 24-year-old pitcher wrote Thursday night in an Instagram post, his first public statement since the slayings. “The pain my family and I feel is unbearable and cannot be put into words. I shake and tremble at the thought of our future without them.”

Bivens flew from a road trip back to southern Virginia when he learned of Tuesday’s tragedy. He was accompanied by Montgomery Biscuits manager Morgan Ensberg.

The 18-year-old brother of Bivens’ wife has been charged with first-degree murder in the slayings, which have shocked his coaches, teammates and the community where his family lived.

“You don’t wish this on any community, any family,” Pittsylvania County Sheriff Mike Taylor said. “We’re a small community. It affects us all.”

Two days ago my heart was turned to ash. My life as I knew it is destroyed. The pain my family and I feel is unbearable and cannot be put into words. I shake and tremble at the thought of our future without them. Emily, my sweetheart, you are the best wife and mother this world has ever seen. You made me into the man I am today and you loved me with all of my flaws. You brought our precious baby boy into this world and made our family complete. Your love and kindness changed countless lives, including mine. My sweet little boy, dada loves you so much! I can’t breathe without you here. I finally understood what love was when you were born and I would have done anything for you. You have changed my life forever, you are my reason why. I long to hold the both of you again in heaven. I’m so glad you are with all your Great-grandmothers now, I know they are eating you up. This earth did not deserve either of you; you were just too wonderful to comprehend. Joan you were the best mother-in-law anyone could ask for. You loved your family more than anyone I’ve ever seen. You raised the most wonderful girl in the world. I’m so glad y’all are still together. You were the best Nana this world has ever seen and I will never forget you. Skip you are a wonderful father and grandfather. We will get through this together as a family. We will not let the devil win! Thank you God for giving me the most wonderful family in the world! I’ve been blessed beyond belief. Thank you to all my family and friends who have reached out to me during this time of sorrow. Thank you @raysbaseball @biscuitbaseball for your support through everything. I am comforted by all the messages and well wishes. I’m not sure what is next for me, but I do know God has a plan even though I can’t see it.

“Emily, my sweetheart, you are the best wife and mother this world has ever seen,” he wrote. “You made me into the man I am today and you loved me with all of my flaws. You brought our precious baby boy into this world and made our family complete. Your love and kindness changed countless lives, including mine.”

Of Cullen, Bivens wrote “I can’t breathe without you here” and “I finally understood what love was when you were born and I would have done anything for you.”

Court documents released Thursday revealed new details in the slayings but did not explain what could have driven 18-year-old Matthew Bernard to allegedly kill his sister, nephew and mother.

In Montgomery, the Biscuits — a Double-A affiliate of the Tampa Bay Rays — painted “BIV” on the ground behind home plate before a game against Pensacola. They were to hold a moment of silence before the game, with another planned before the Rays’ home game Friday against the Cleveland Indians.

Our thoughts & prayers are with the family, friends and teammates of Blake Bivens in the wake of a terrible family tragedy, as well as the entire Rays organization, during this very difficult time. pic.twitter.com/p4XlwvblfK

Montgomery pitching coach R.C. Lichtenstein remembers pregame moments when Bivens would walk over to see his wife and hold Cullen.

Biscuits pitcher Ryan Thompson said Bivens’ family was on his mind “all the time.”

“His family was everything to him,” said an emotional Thompson, who described Bivens as a close friend with a “hilarious” sense of humor.

“He never lets the game get in the way of who he is as a human being. He’s such a great guy, and something like this couldn’t happen to a better human being,” Thompson said.

According to the complaint filed against Bernard, the teenager’s rampage began Tuesday morning at a neighbor’s house. Bernard punched the neighbor in the arm and then ran away, police said.

The neighbor then heard gunshots at the house next door, police said. The neighbor drove to the house and found a woman’s body in the driveway. Inside, she found the other two bodies.

Officers found two victims with gunshot wounds to the head and rifle shell casings near all three bodies.

A rifle was found in a wooded area behind the house and a sledgehammer with blood was found in the garage, the court documents said.

The criminal complaint did not offer any motive for the killings, and authorities have declined to comment.

After the bodies were discovered, a manhunt brought as many as 100 officers to Keeling, a tiny community near the North Carolina border.

Bernard emerged naked from the woods about four hours later, running past TV cameras to a church parking lot, where he was recorded trying to choke a church caretaker.

Naked homicide suspect captured after trying to flee from police

The sheriff's office say he is a suspect in a triple homicide that included the wife and child of Blake Bivens, a pitcher with the Tampa Bay Rays. (Video: WSET)https://t.co/mF3Un1eZyr pic.twitter.com/tzKjKtfE8l

An officer used pepper spray and struck Bernard with a baton before he was captured, officials said.

Bernard banged his head against the cage in a police vehicle after being taken into custody and was taken to a hospital for treatment, police said. He was released and was in jail Thursday, where he was being held without bail and kept on suicide watch, police said.

A “celebration of life” service for the slain family members is planned for Saturday.

A vigil was held at The River Church in Danville, Virginia, Wednesday night. Senior pastor Jackie Poe led those in attendance in prayer for the Bivens and Bernard families.

Avery Stevens, pastor of Keeling Baptist Church, said he was in his office where he also works as an insurance agent when he saw the television coverage of Bernard’s capture near his church.

“Pray for the family,” he said. “Praying for the community. Praying for healing.”