The New York Yankees have by far been the talk of the 2022 MLB season. As we approach July, the Bronx Bombers are 36 games over .500 at 56-20 and doing just what the nickname implies: they lead the big leagues in home runs and runs, and it ain't close.

Thanks to surprise performances from players like starting pitcher Nestor Cortes Jr. and reliever Clay Holmes, as well as Aaron Judge's MVP-deserving first half, the Yankees are entering "best team of all-time" territory so long as they keep up this pace. No, seriously. The Yankees' current .737 winning percentage means they're on pace to finish the regular season at 119-43. That mark would shatter the MLB record for most wins in a regular season set by the 1906 Chicago Cubs and tied by the 2001 Seattle Mariners.

The Yankees already claim some of the best teams ever -- does the phrase "Murderer's Row" ring a bell? This team could very well etch its name in the history books alongside the others. New York's incredible season thus far got us thinking...what are the best teams in MLB history by record in the Modern Era? Unsurprisingly, some of baseball's most historic franchises make the list. 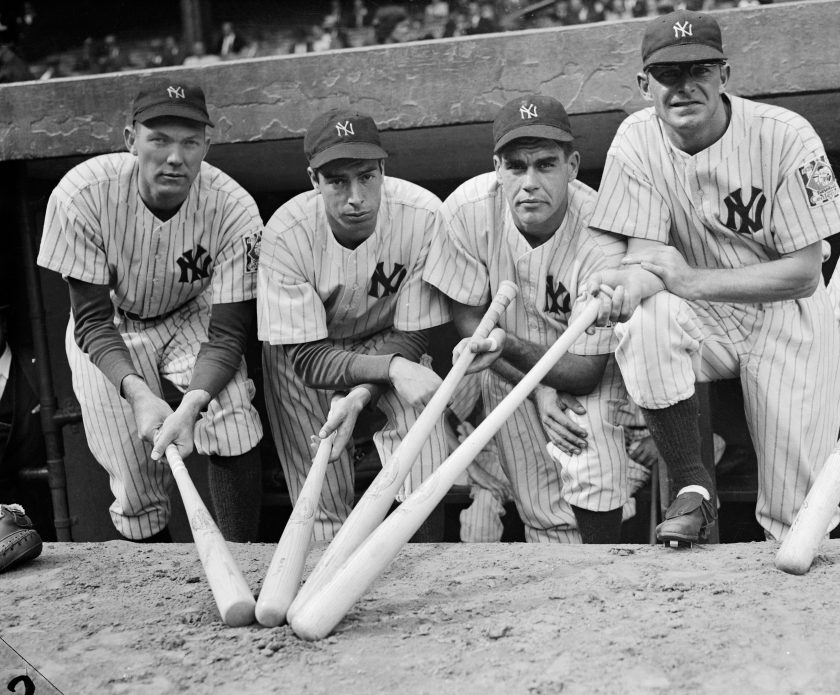 This could just be the sneakiest greatest Yankees club ever, and that's saying a lot. The last of four straight World Series titles was led by Joe DiMaggio, who won the first of three MVP awards and hit a career-high .381. Lou Gehrig also gave his "Luckiest Man" speech this season. In total, this team boasted six Hall of Famers and outscored their opponents by 411 runs, which is still the best mark in the Modern Era. 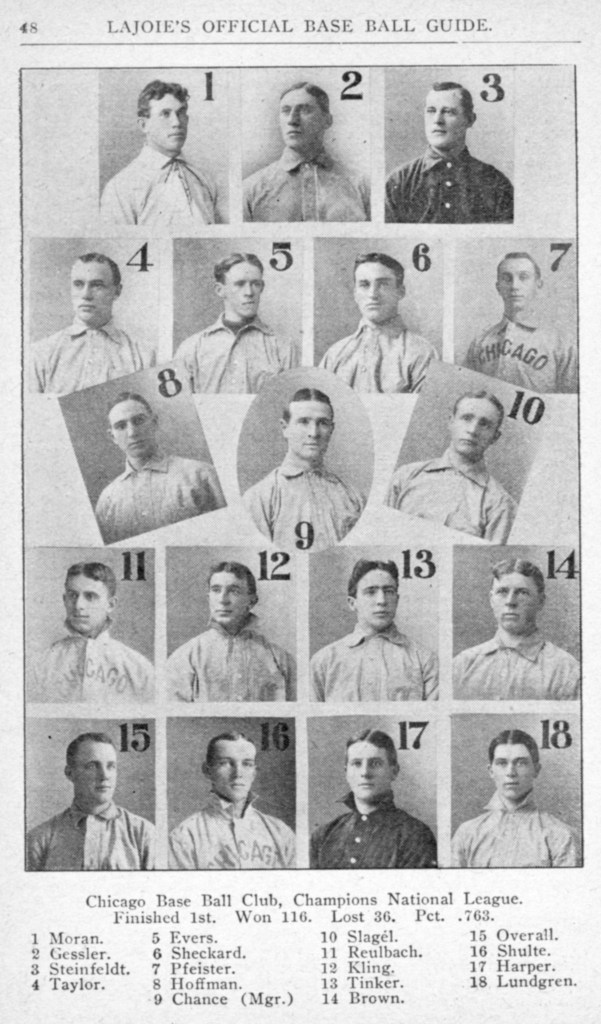 How do you follow up the greatest statistical season in baseball history (you'll see what I mean if you keep reading)? By winning the World Series, the first ever for the Chicago Cubs. The highlight of this team was the pitching: four different starters owned ERAs under 1.70, showing exactly how dead the Dead Ball Era was. 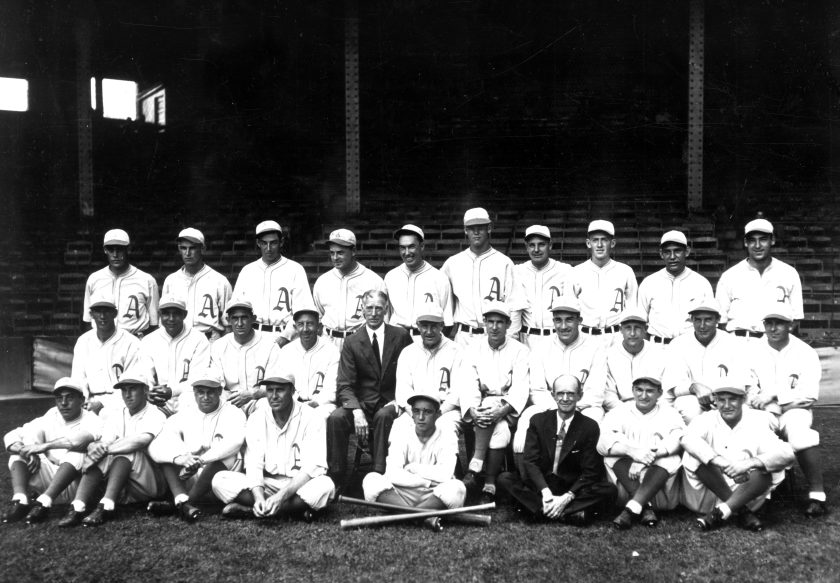 Long before they were the Oakland Athletics or even the Kansas City Athletics in the 1950s, the Philadelphia Athletics won back-to-back World Series in 1929 and 1930. The following year, they boasted all the firepower to win another one. Hall of Famers catcher Mickey Cochrane, first baseman Jimmie Foxx, outfielder Al Simmons and starting pitcher Lefty Grove led the way. In fact, Simmons hit a ridiculous .390 that year. This team may have won 17 straight games at one point in the season, but fell to the Cardinals in seven games at the Fall Classic.

Ah, finally a semi-recent team. Led by the one and only Derek Jeter, as well as names like Paul O'Neil, Bernie Williams (who won the batting title), Scott Brosius, Tino Martinez and Jorge Posada, this lineup was impossible for pitchers to get through. The pitching staff was loaded, too. David Wells threw his infamous perfect game while hungover. There was Andy Pettitte, David Cone, rookie sensation Orlando "El Duque" Hernandez and, of course, Mariano Rivera. This Yankees team was dominant in the postseason, too, losing just two playoff games. 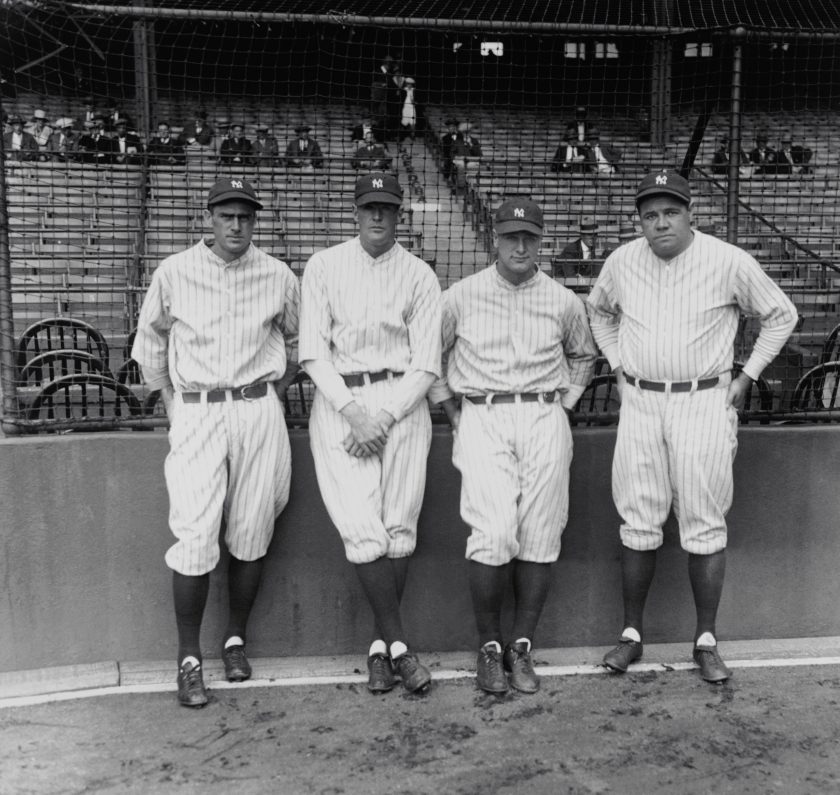 Babe Ruth. Lou Gehrig. Earle Combs. Mark Koenig. Bob Meusel. Tony Lazzeri. That was Murderer's Row. Let me just throw out some of their stats while we're here: Gehrig won MVP behind a .373 batting average, 47 home runs and 173 RBIs. Ruth's career-high 60 homers. Many of those other names hit well over .300. Many discussions regarding the greatest teams of all-time begin with the '27 Bronx Bombers. It's not hard to see why. 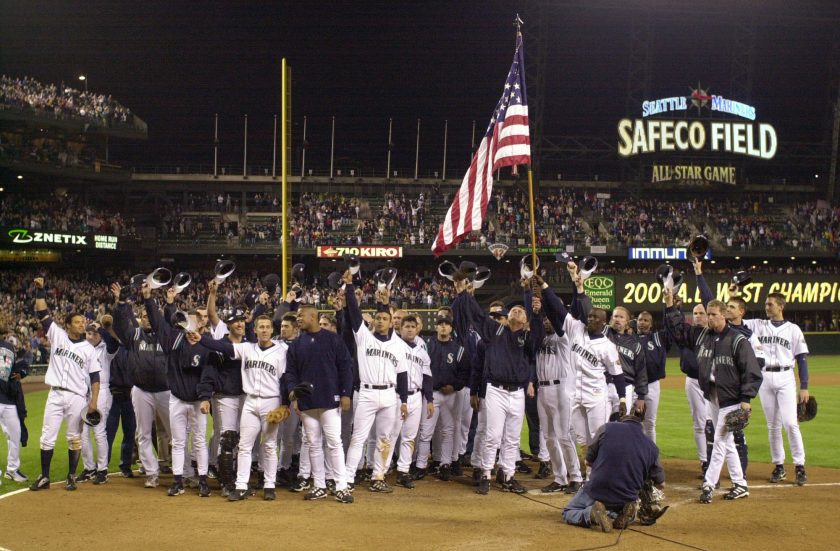 Winning 116 games should be illegal in this day and age, and yet the 2001 Mariners did it. Ichiro's incredible MVP (and Rookie of the Year) season -- he hit .350 and stole 56 bases -- set the table for power hitters like Bret Boone, Mike Cameron and Edgar Martinez. What made this team even more incredible is that they dominated without the stars that had previously been the faces of the franchise: Ken Griffey Jr., Alex Rodriguez and Randy Johnson. Sure, they were ousted from the playoffs by the Yankees, but this team is undoubtedly one of the greatest of all time. The wins say it all. 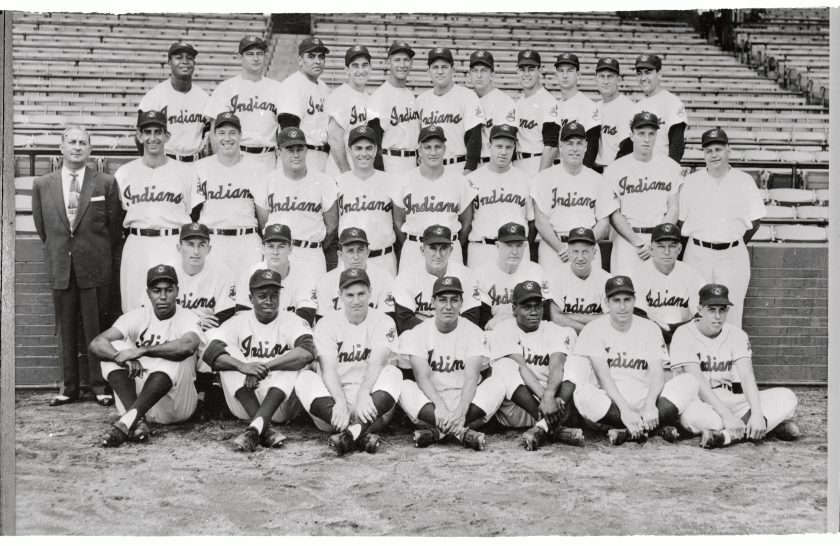 These Indians have a legitimate case as the best rotation of all time. Dig into the numbers and you'll find this team's collective starting pitching ERA is 2.85. That was buoyed by Hall of Famers Early Wynn, Bob Feller and Bob Lemon, plus three-time All-Star Mike Garcia. Feller was 35 and on his way out by then yet still posted a 3.09 ERA. It didn't hurt that slugger Larry Doby nearly won the MVP. How many teams here can say they had three starters make the HOF? 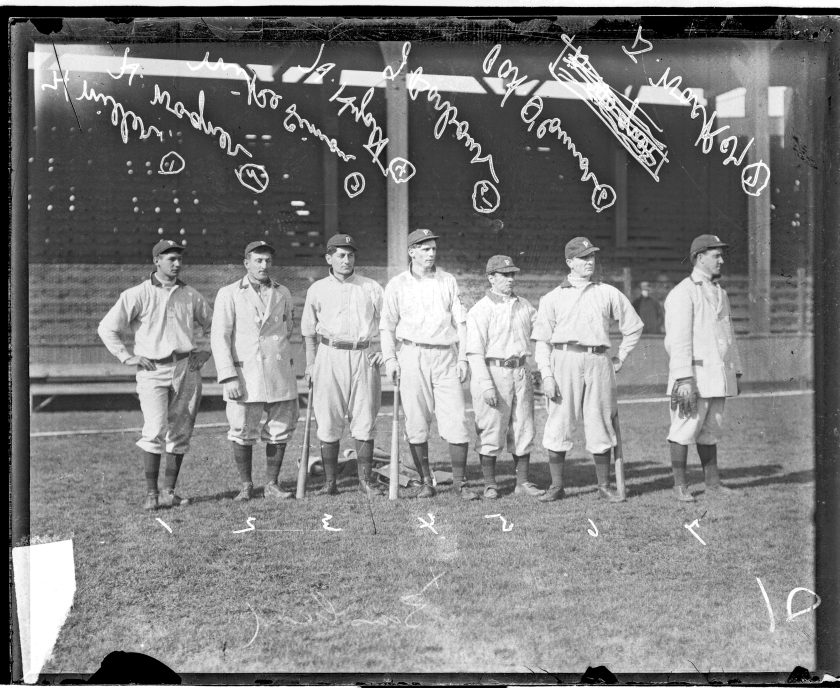 This was Honus Wagner's team. You know, the guy with the card. The Hall of Fame shortstop won the batting title this season at .339 (he did that eight times in his career), and that mark wasn't even close to the best of his career. The Pirates rattled off a 16-game winning streak in September and won the World Series to get them third on this list. 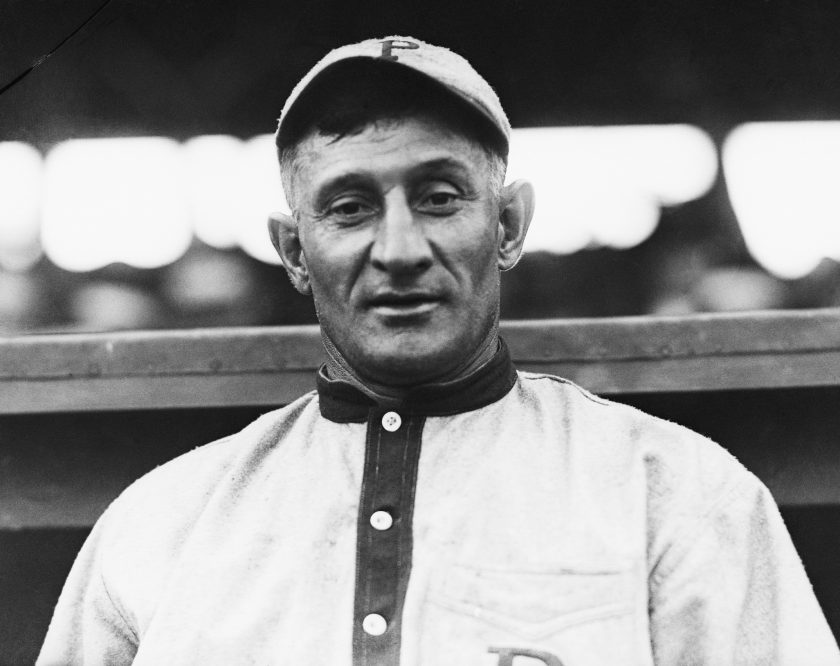 The 1902 Pirates were show-stoppers. They led the National League in nearly every hitting category and ran away with the NL Pennant, winning it by 27.5 games. The individual statistics won't necessarily wow anyone, aside from maybe Ginger Beaumont's league-best .357 batting average or the pair of Hall of Famers in Wagner and Fred Clarke. The unfortunate part about this terrific team is that the World Series as we know it didn't exist until the following year. 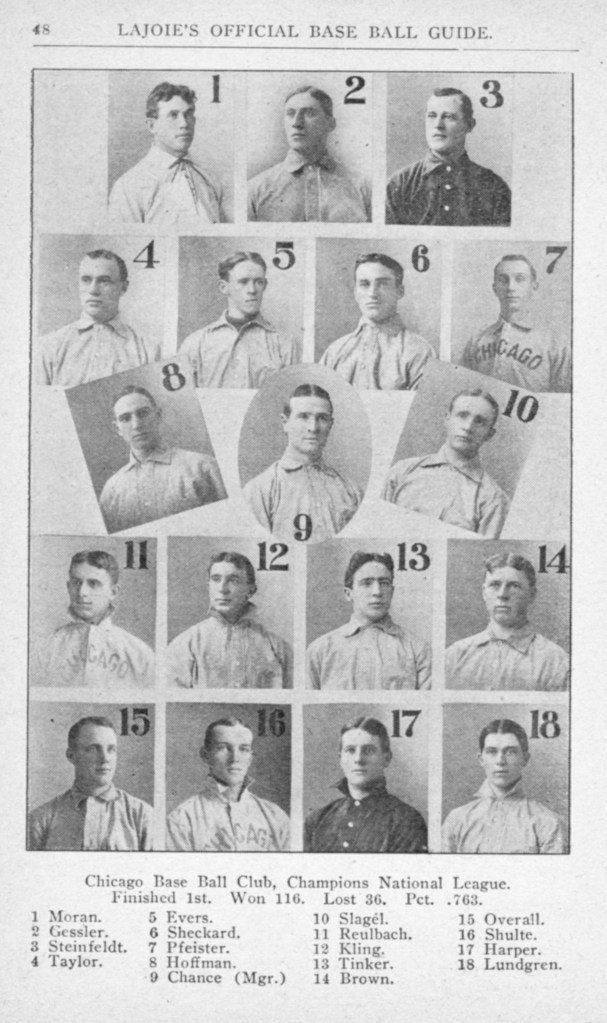 The greatest of all time, at least according to winning percentage. You've probably never heard of any of these guys either. The 1906 Cubs hit 20 home runs all season and had an actual, real person named Orval Overall on the roster. This was so long ago that player managers were still a thing, too. Frank Chance, one of four players from this team enshrined in Cooperstown, hit .319 and managed the team while doing so. There was also a famous poem called "Baseball's Sad Lexicon" written by Franklin P. Adams about the Cubs' double-play combination: Joe Tinker to Johnny Evers to Frank Chance. Their 116 wins are still the most ever, a feat that was tied by the 2001 Seattle Mariners. Neither of those 116-win teams won the World Series, though. The 2022 Yankees might need to slow their roll based on those two teams.