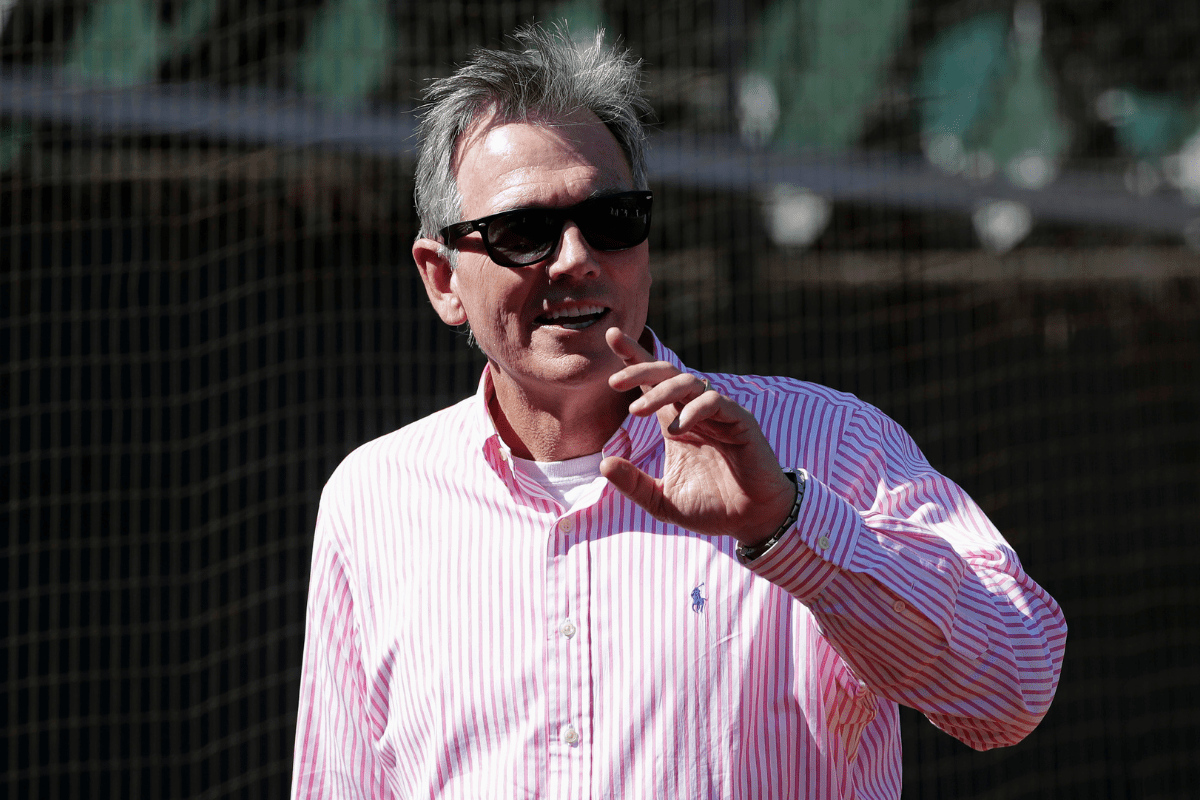 Imagine if you did something so earth-shattering that Hollywood made a movie about your legacy while you were still alive. Now imagine they cast Brad Pitt to play you.

The Major League Baseball front office executive was born in Orlando, Florida, and gained fame in California. He started his MLB career as a so-so baseball player. Now the former player has changed how general managers look at baseball teams.

Moneyball propelled Beane’s name to stardom, though he doesn’t consider the movie or book to be his story.

His story, the one he lived, not the one told on-screen and in print, is about saving money and studying numbers. His ability to produce wins on a budget has widened his personal budget considerably.

Billy Beane is worth a lot of beans.

Who is Billy Beane?

William Lamar Beane III was born in Orlando on March 3, 1962, when the No. 1 song was “Duke of Earl” by Gene Chandler. Beane’s father was a naval officer. Young Billy Beane moved often with his military family.

The legendary front office executive attended high school in San Diego, California. Beane was high on the 1980 MLB Draft list upon graduation, and many analysts had him as the No. 1 pick. This left the New York Mets with a choice between a Beane and a Darryl Strawberry. They chose the Strawberry and never looked back.

Beane’s MLB draft stock tumbled when speculation circulated that he would attend Stanford University instead of The Show. Beane was selected 23rd overall by the Mets and spent a few years in the minor leagues before being called up in ’84. He was traded to the Minnesota Twins in 1986 — the same year Strawberry and the Mets won the World Series.

He spent a season with the Detroit Tigers before retiring an Oakland Athletic in 1989. During his offseasons as a professional baseball player, Beane completed an economics degree from the University of California San Diego. Beane put his degree to work in the A’s front office. Retired Beane soon joined Oakland’s management.

Around 1995, Beane came across some interesting literature by a man named Bill James. The literature concerned the mysterious new frontier of “sabermetrics.”

Though it sounded like a cult, this was no Scientology. Athletics GM Sandy Alderson introduced Beane to sabermetrics and Beane fully applied the principles when he became GM in 1997. Beane’s use of sabermetrics changed baseball and the sports world forever.

The Oakland Athletics have faced tough competition in the American League since 1901. The New York Yankees and Boston Red Sox have been powerhouses in the league for decades. The Athletics were always present, but never attracted the same star power.

You get the picture. As Oakland GM, Beane was tasked with untying this Gordian knot. The solution was to spend money more wisely. The wisdom was provided by sabermetrics.

Sabermetrics allows managers to value players from a new perspective — that of runs scored. It takes the glitz and glamor out of the game and boils wins down to men on bags.

The ideas had been left field since 1995. Billy Beane was the first to fully trust the principles and allow sabermetrics to make all the personnel decisions. Beane’s ultimate realization of the philosophy culminated in the 2002 Oakland Athletics. It was a team of statistical giants tied together by a shoestring budget.

Moneyball is a style of management stemming from Billy Beane’s application of sabermetrics. It’s also a book and a movie.

Michael Lewis penned “Moneyball: The Art of Winning an Unfair Game” in 2003. He chronicles Beane’s ultimate realization of sabermetrics and “Moneyball” with the 2002 Athletics team. The team was white-hot during the regular season and even reeled off 20 wins in a row in August.

They may have gotten creamed in the playoffs (more on that in a moment), but they got a movie deal out of it. That’s what you call a California Consolation Prize.

Brad Pitt played Billy Beane in his usual gruff fashion in the 2011 movie adaptation. The film chose to drop the long title and settle on the snappier “Moneyball.” Brad Pitt, Jonah Hill, and Philip Seymour Hoffman were praised for their performances, though no Academy Awards were given.

That may not be a fair question.

It’s too broad. On the one hand, sabermetrics always works. On the other, it never works. Even when applied to other sports, it has never bought Oakland (or Houston) a championship.

Here’s where sabermetrics works: it’s almost like the theory of evolution in that it’s so obvious that it has to be true. If you have a team full of players who consistently get on base, you’re going to score a lot of runs, and you’re going to win games. Your game grinds other opponents down because it is a mathematical tide.

Sabermetrics don’t pay off in home runs. It pays off in steady statistical advantage and occasional Grand Slams. Sabermetrics is all about teams.

And that’s why sabermetrics doesn’t work. If regular seasons determined championships, the Oakland Athletics would have won the 2002 MLB Championship, the Golden State Warriors the 2016 NBA Championship, and Tom Brady yet another Super Bowl in 2008.

But none of those teams could fully reproduce their regular-season dominance in the playoffs. That’s because the playoffs are a whole different animal, no matter the sport.

You need superstars to win playoff games. The pressures of elimination force statistical anomalies (in the form of star players) to flourish like meteor showers. Don’t even get me started on those trash Cleveland teams carried by LeBron James!

Every MLB GM uses sabermetrics today. The principles have changed the league forever, probably for the best. Sabermetrics is based on fact and fact analysis. It’s a smart way to manage investments.

Not that Billy Beane needs any advice on managing investments, that is.

Beanball’s Billy Beane is a busy businessman. His diversified interests have netted him an estimated net worth of $14 million. He earns an annual salary of $2 million with Oakland, though David Forst is now the GM. Beane’s got his hands in so much more.

Surprisingly, Beane has his hands in video games. He was influential in the creation of MLB Front Office Manager, which I cannot believe is a real game. You don’t even play baseball in the game… you just manage the front office. Every time I think baseball is as boring as it gets, they find a new way to dull my senses.

Around 2019-2020, it was widely speculated Beane would leave the Athletics for a minority stake in the Boston Red Sox as part of John Henry’s Fenway Sports Group. Beane co-chairs a sports group named Redball Acquisition Corp., which John Henry sought to purchase.

Since Beane is a minority owner in Oakland, he had to be careful not to create a conflict of interest. Therefore, it was speculated Beane would leave Oakland for bigger and broader horizons.

Henry’s group also owns the British soccer giant Liverpool, which is of particular interest to Beane. Beane has been looking to leap across the pond and get his hands on the real money of European football. His group has stakes in the MLS’s San Jose Earthquakes, the Dutch Football club AZ Alkmaar, and British professional team Barnsley.

Despite Beane’s personal motivations and one of the English Premier League’s ex-executive chairman being on the RedBall Board of Directors, the John Henry acquisition deal fell through in 2020.

Outside of the baseball biz, Billy Beane has been on the board of directors at NetSuite since 2007. They reportedly hired Beane “because of math.” Seems like a safe bet to me.

Outside of baseball and business, Beane has one wife, one ex-wife, and three children. His current wife Tara Beane lives with Billy in California. They have a pair of twins named Tinsley and Brayden. He has a daughter named Casey Beane with his ex-wife Cathy Sturdivant.

Moneyball has made Billy Beane a money man, even if non-baseball fans have never heard of him. Billy Beane changed the game forever and the game changed his life in return.