Ernie Johnson Sr. took the mound three times in the postseason, all of which came in 1957 World Series losses against the New York Yankees, a series the Milwaukee Braves wound up winning.

He was nearly flawless, giving up just one run in seven innings of relief work.

Ernie was far from the star of that team. There was Red Schoendienst and Warren Spahn, both Hall of Famers. There was Frank Torre, the brother of Cooperstown inductee Joe Torre. And then there was Hank Aaron, who I don't need to provide any context for.

Ernie and Hank were teammates on the Braves throughout the 1950s, and while Ernie Jr. -- who would go on to become the NBA broadcasting voice we all know and love -- doesn't remember much about his dad's MLB career, he does remember one neat part of his "world's greatest" childhood.

"I used to ... have Hank Aaron ask me how my Little League team was doing," Jr. told Curt Smith for SABR.org.

For those not aware, Ernie Johnson Jr.'s dad was a pretty darn good MLB reliever for close to a decade. After his career, he became the voice of the Braves and inspired his son to follow in his voice-steps.

Ernie Johnson Sr. Won a World Series With the Braves 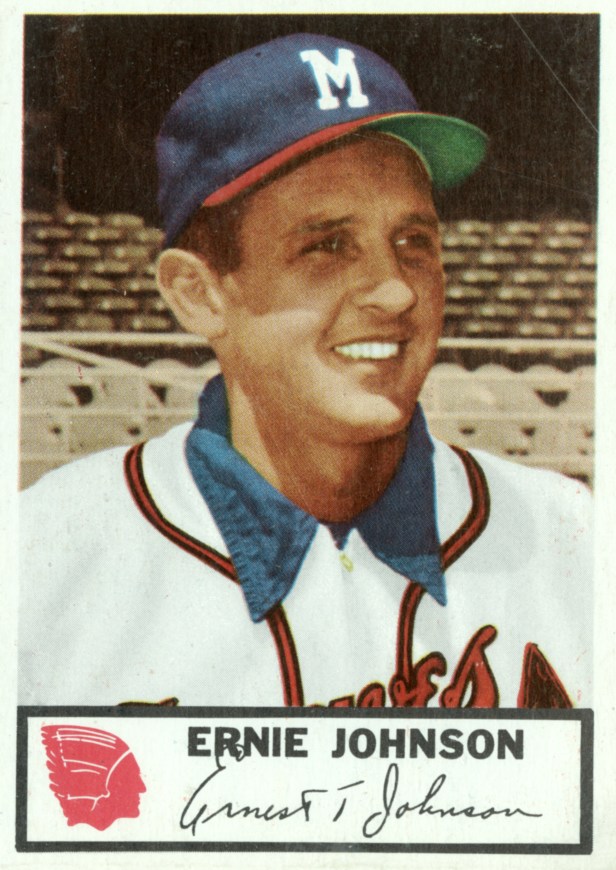 RELATED: What Happened to the 2 Fans From Hank Aaron's 715th Home Run?

Ernie Sr. was actually viewed as a better basketball player while playing for Brattleboro High School in Vermont. Yale was interested in him, but by his senior year he had become a darn good pitcher.

His high school coach took the 6-foot-4 hurler to Boston for some tryouts with the Boston Red Sox in 1942, but the Boston Braves became interested in him. The Braves gave him a choice to either travel with the big-league club and throw batting practice or play in the minor leagues. He chose the bigs.

After a three-year Marine Corps stint in which he was part of the Battle of Okinawa in Japan, Ernie Sr. was playing for the Braves in spring training in 1950. He gave up a home run to the great Ted Williams, but he still made the team and debuted during the 1950 season, making his first appearance against the Philadelphia Phillies on April 28. 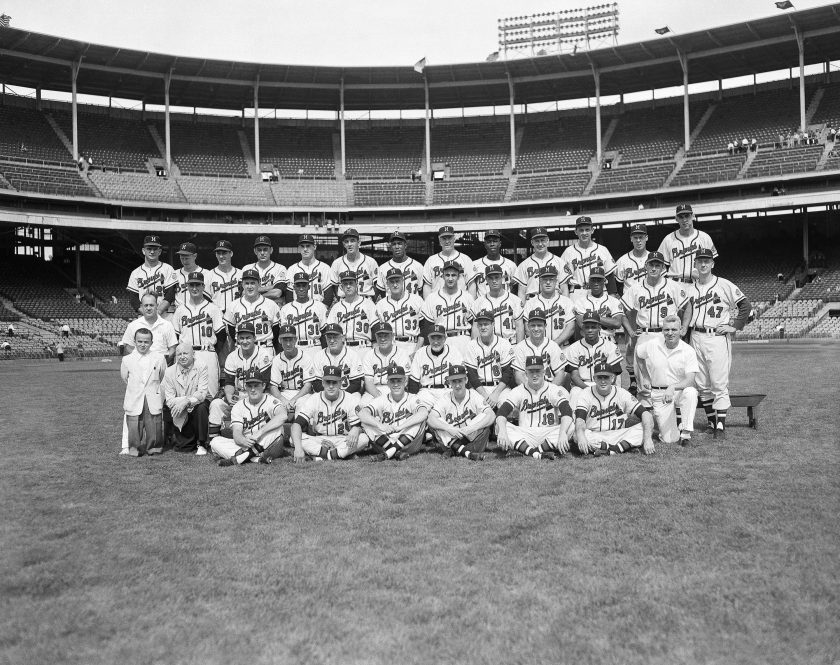 He spent nearly the rest of the decade solidifying himself in the Braves' bullpen. He finished his nine-year career with a 40-23 record, a 3.77 ERA and a 1957 World Series ring.

"Maybe not the stuff of Cooperstown," Hall of Fame teammate Eddie Mathews told SABR.org, "but damn it, the man could pitch." 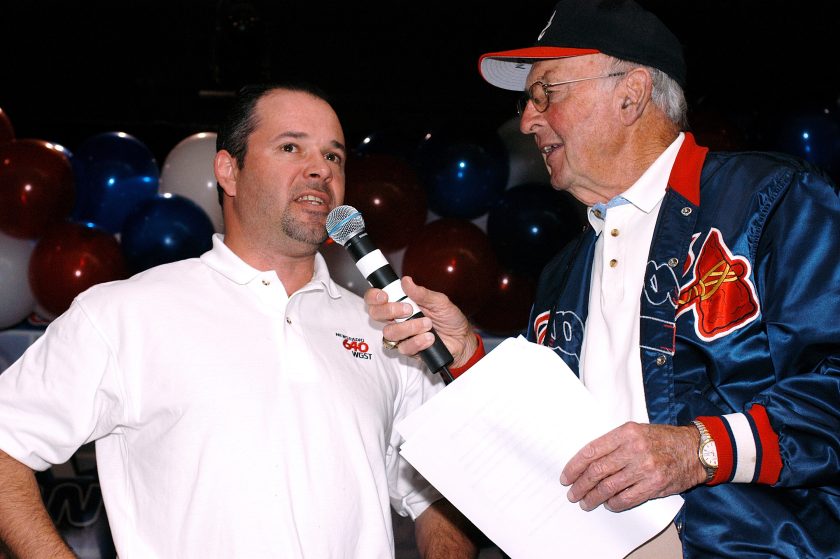 After retiring, Ernie Sr. then hosted a local Milwaukee TV show called "Play Ball." The premise? To bring on guests, talk baseball and drink...milk. How simple life was back then.

It wasn't until 1962 that he began serving as a commentator role for Braves radio broadcasts on TBS, serving as the voice of the team until 1999. He called too many memorable Hank Aaron home runs to count like his 500th, 600th and 700th long balls.

My dad and Henry Aaron were teammates in Milwaukee and later he would call Hank's 500th 600th and 700th HRs. I was lucky enough to meet Henry as a kid, went to high school with his sons, and cherish every encounter I ever had with him through the years #therewillneverbeanother https://t.co/qBkdhgSjl1

All the while, Ernie Sr. was inspiring his son to join him in the broadcast booth. 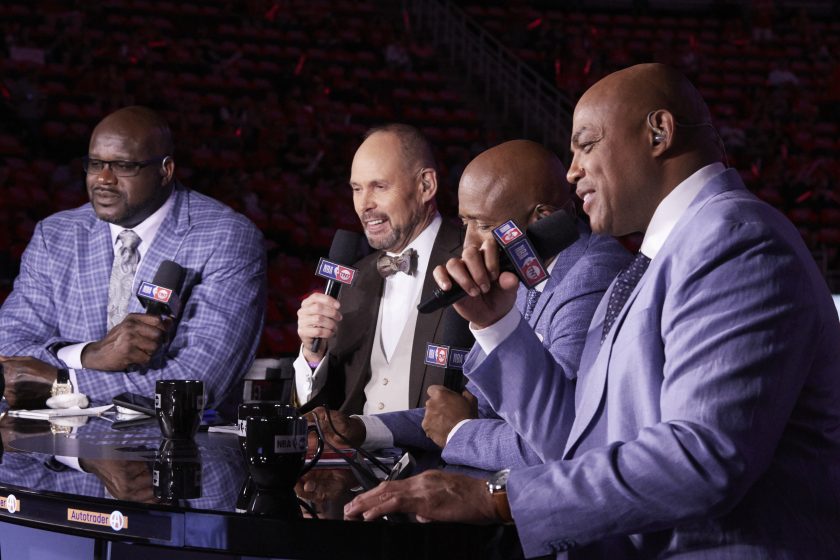 Ernie Johnson Jr. was never the baseball player his dad was. He briefly made the team at the University of Georgia as a walk-on infielder, but he quickly realized his calling might be from the press box at the diamond.

After serving as the news and sports director at UGA's student-run WAGQ-FM and graduating with a degree in journalism, he served as a late-night news anchor for a station in Macon, Georgia, not far from where his dad was becoming a nationally-known voice.

Ernie Jr. bounced around a few other stations before joining Turner Sports in 1989. There, he was united with his legendary father. The two called Atlanta Braves games for SportSouth in the mid-1990s for a few seasons.

On this Father?s Day my dad would have turned 95. He?s the guy I always looked up to. pic.twitter.com/Iv1ZIQZc2R

"He felt very blessed, very lucky to be doing this. And he always told me, 'Ernie, this game's not about me. It's about the people on the field. Don't ever let the game be about you,'" Ernie Jr. recalled to SABR.org.

Of course, Ernie Johnson Jr. has since become one of the most respected broadcasting voices in the industry. He's most notably the host of TNT's wildly successful show "Inside the NBA" with legends like Shaquille O'Neal and Charles Barkley. He also contributes toward MLB and NCAA Tournament coverage for the network.

Ernie Johnson Sr. passed away from congestive heart failure on August 12, 2011. He was 87.

The young Ernie continues to honor his father with each and every broadcast. His children still wear the No. 32, the same one his dad wore in MLB.

MORE: Ernie Johnson & His Wife Had 2 Kids and Adopted 4 More