The rise of the fireball reliever has brought a new and dangerous aspect back into baseball, one the league tried to rid itself of in the early 20th Century.

As you may have noticed, more hitters are getting hit in the face by pitchers than ever before. As far back as 2014, when a player like Giancarlo Stanton took a pitch to the face, the news was massive. Baseball may seem like a laidback sport due to the reliance on inaction during its gameplay, but with each pitch, batters are facing 90+ MPH baseballs. No matter how you slice it, there's always a danger when stepping into the batter's box.

And no one knows that danger more than the New York Mets. 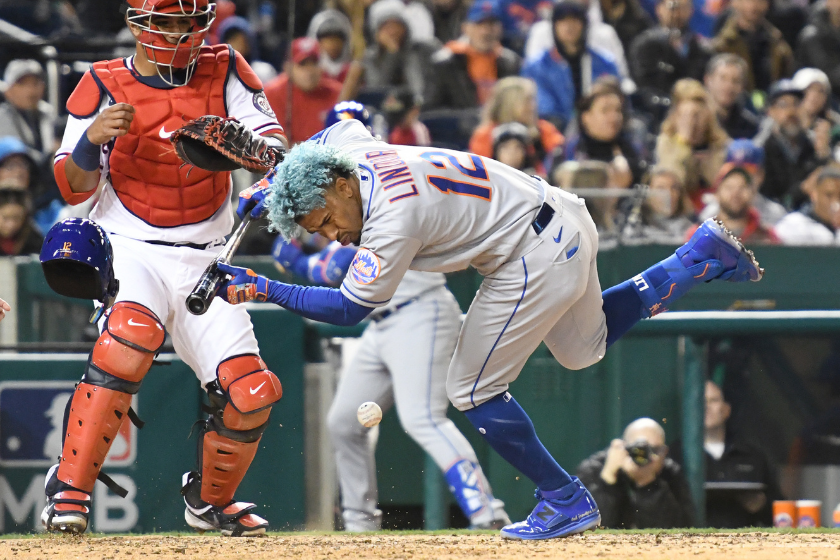 The New York Mets began their season against their division rival Washington Nationals with a bang, or in the case of Pete Alonso and Francisco Lindor, with a hit-by-pitch above the shoulders.

Pete Alonso wore a ninth-inning Mason Thompson pitch to the head on Opening Night, which forced Pete to come out of the game. Mets outfielder Starling Marte stood at the top of the dugout steps holding up three fingers as if to say, "Three times! This has happened three times!" The Mets were already up by four runs, so the loss of Alonso didn't affect the final outcome, but the Mets were heated. Why? Because this was the third time in the first game of the season that a Mets hitter was plunked. In fact, the Mets' first run of the season came on a James McCann hit-by-pitch with the bases loaded. By the time the game was over, McCann would be hit twice.

The next game would lead to new Mets manager Buck Showalter taking matters into his own hands. In the top of the fifth, after the Mets took a 4-3 lead, the National brought in Steve Cishek to face Francisco Lindor. On the second pitch from the veteran reliever, Lindor was hit in the C-Flap of his helmet, which is meant to protect a batter's face. Before Lindor could hit the dirt, Showalter was out of the dugout and charging towards Cishek. The benches cleared, words were exchanged and when the dust settled, Cishek was ejected, Lindor was taken out of the game and the Mets would go on to win 7-3.

Since those first two games, the Mets have been hit more than any other MLB team and have had a second benches-clearing brawl against the Nolan Arenado and the St. Louis Cardinals, who hit J.D. Davis in the foot, causing him to leave a game, as well as hitting Alonso with a pitch that cracked the C-Flap on his helmet. But this is nothing new to the New York Mets.

If it feels like all this HBP stuff is familiar, here's a crazy stat to explain why: 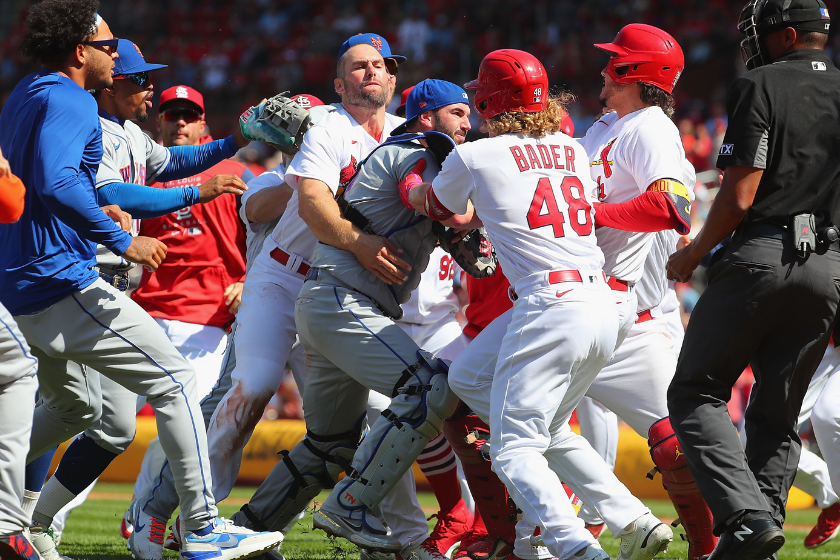 The Mets are no doubt upset with their opponents but have turned their sights on Major League Baseball. Mets pitcher Chris Bassitt ripped into MLB and the changes they've made to the baseball in the 2022 season.

"The MLB has a very big problem with the baseballs -- they are bad. Everyone knows it. Every pitcher in the league knows it. MLB doesn't give a damn about it. They don't care. We have told them our problems with them, they don't care."

Citing inconsistencies with baseball, Bassitt added that it's not even a matter of different climates or altitudes. "There is no common ground with the balls," he said to the media after his start against St. Louis. "There is nothing the same, outing to outing." And Mets pitcher Chris Bassitt knows how dangerous this problem is for hitters, especially after he was struck with a line drive from a batter while pitching for the Oakland Athletics.

In 2022, MLB teams can expect an average of 0.42 hit by pitches a game, which is in line with the 0.40-0.46 range the league has seen since 2017. While that may not seem like much of an increase, it's a big jump from the 0.30-0.39 range that was constant for the previous two decades. When Bryce Harper was hit in the face by a Genesis Cabrera fastball and Kevin Pillar took a pitch to the face from Braves reliever Jacob Webb, coaches, players and pundits called out front offices for emphasizing a "velocity first, control second" approach with pitchers, especially relievers. And what's worse, is that the problem is only going to get worse the more MLB and Commissioner Rob Manfred tinker with the baseball.

A Baseball Problem from Baseball's Past 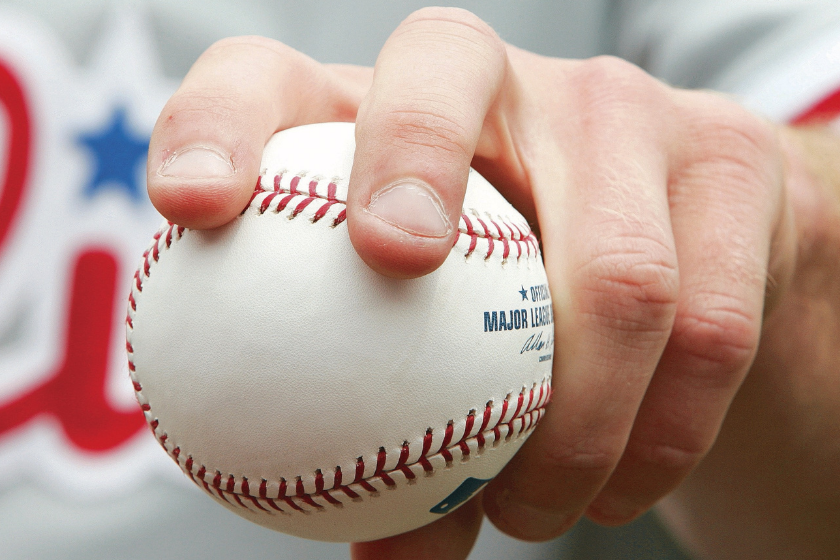 This is oddly the same kind of issue that led to massive changes in baseball back in the early 20th Century. On August 16, 1920, Ray Chapman stepped into the box against Carl Mays, in a regular-season game between Chapman's Cleveland Indians and Mays' New York Yankees.

In 1920, pitchers would do whatever they wanted to the ball, often scuffing, sandpapering, spitting on, covering it with licorice and doctoring the ball in any way they could that would give them an advantage against hitters. On that August afternoon, spectators claimed that Chapman never reacted to Mays' pitch and that the sound of the ball hitting his skull, sounded like he had made contact with his bat.

Following Chapman's death and sanitary concerns, pitchers were no longer allowed to doctor the baseball and would have to throw out a ball once it was deemed unsafe to use.

The Modern Game Has A Vintage Problem 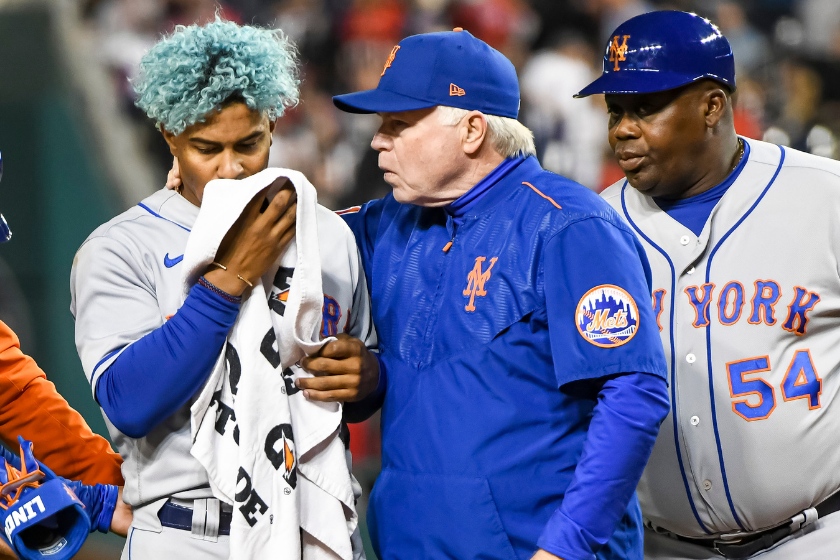 In today's modern game, when those procedures have been in place for a century, what does MLB do? Pitchers are struggling with gripping the ball without the help of sticky foreign substances and some are struggling to stay in the majors by bringing their velocity down. Major League Baseball now has a difficult problem to solve and it's already too far in to back up and reset. The change in the baseball and the rise in fireballers and the game cannot find a middle ground for the two issues.

The New York Mets may be the first team to see the effect of this problem, but if MLB doesn't step in and make some changes, they will not be the last.

MORE: Angel Hernandez is the Worst Umpire in the History of Major League Baseball