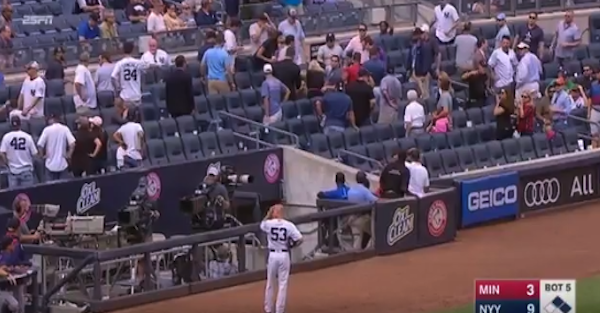 UPDATE: Details emerge on the condition of 2-year-old child struck by foul ball at Yankees game

The New York Yankees-Minnesota Twins game was briefly stopped in the fifth inning Wednesday afternoon after a child was reportedly struck in the mouth.

Todd Frazier immediately dropped to a knee after fouling the ball into the stands, and other players quickly followed suit.

The young girl hit was with her grandparents at the game, according to an official https://t.co/LosxIFulmt

The child has reportedly been rushed to Columbia Presbyterian.

The Yankees have issued the following statement, per ESPN:

“The child who was struck with a batted ball today was given first aid at the ballpark and is receiving medical attention at an area hospital. The federal Health Insurance Portability and Accountability Act, known as HIPAA, prevents the team from giving more information. We will have no further comment at this time.”

We’ll continue to update this story as more information emerges.