It was routine for Nolan Ryan to hop on a bike immediately after his starts, especially by the time he was 45.

"Within 15 minutes of pitching a game, I'm riding an exercise bike in the locker room for 20 to 30 minutes," he told the Chicago Tribune in 1992.

But on September 27, 1992, The Ryan Express remained parked in the dugout after he was done pitching. He was fixated on the man opposing him, a 29-year-old 6-foot-10 left-hander who had racked up 18 strikeouts against the Texas Rangers that night in Arlington, Texas. The same man Ryan had given some key advice to earlier that season -- advice that would ultimately turn his career around.

The man is Randy Johnson, and the story is one that only adds to the legacy of the great Nolan Ryan.

The Ryan Express and The Big Unit First Meet 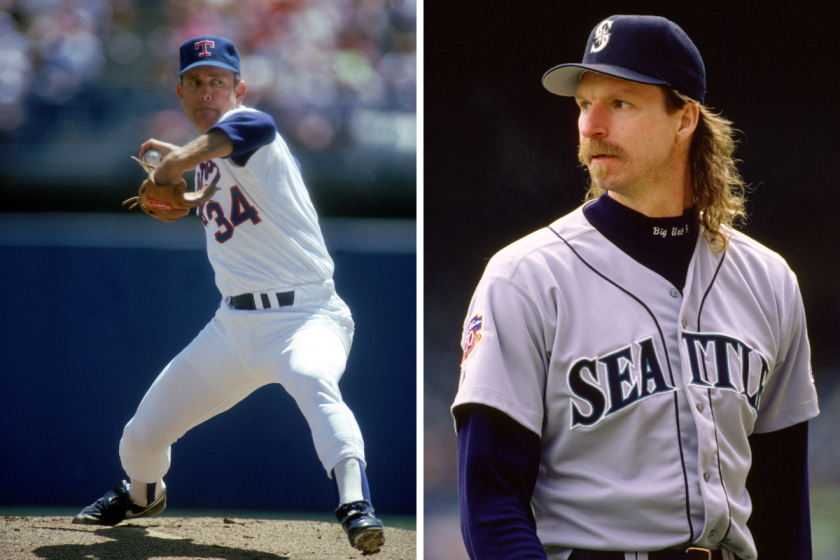 By 1992, these now-storied flamethrowers had very different career arcs. There was Ryan, the man who had pitched 25 seasons for four different teams and by then was by far the MLB career strikeout leader. And then there was Johnson, the former Montreal Expos' second-round draft pick who owned a career 4.01 ERA in 98 starts through his first four seasons.

Both would become legends. Both would pitch well into their 40s, putting up some of the best numbers of their careers when most pitchers are hanging up their cleats.

The two crossed paths for the first time before their teams played each other on August 8, 1992. Ryan was heading back to the dugout after a bullpen session when he bumped into Johnson, as Johnson told BaseballStrength.org. The two got to talking and Ryan gave him advice that led to him becoming The Big Unit we all grew up watching. 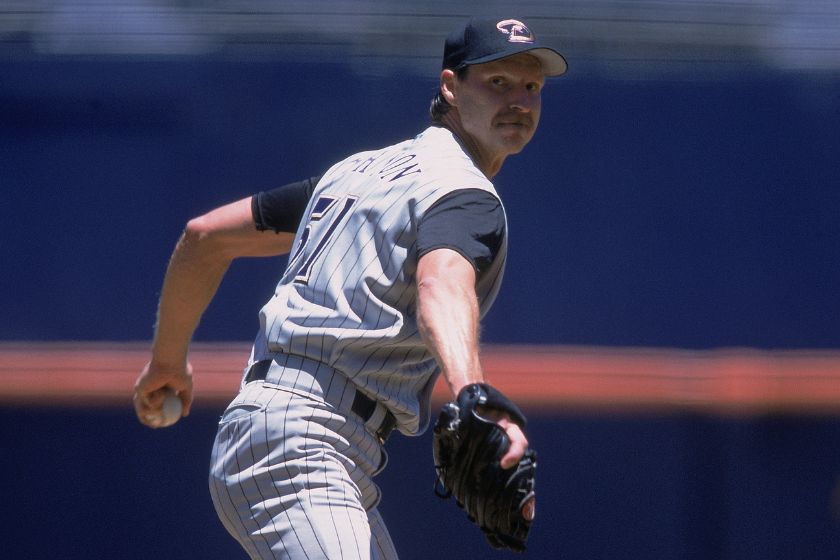 "We started talking and I told Nolan that I wasn't comfortable with my delivery. He spoke and I listened. He started by saying that because I'm so tall (6'-10'), my arms and legs are much longer than the average-sized pitcher it's harder for me to keep them under control. He said that trying to be consistent with extremities that long, and controlling my body were the biggest challenges that I had to face as a developing pitcher. He said that I was driving my body toward third base instead of going directly to home plate," Johnson told BaseballStrength.org.

"I also had to throw more strikes. He said that no matter how hard I threw, I would be only as consistent as my mechanics allowed me to be. He had me land on my forefoot instead of my heel and my mechanics quickly improved. He stressed that I had to develop consistency with my arm angle and mechanics before I could be successful."

Johnson also shared that Ryan emphasized going right after hitters. Ryan was notorious for his gritty, old-school mentality and it sounds like Johnson absorbed some of that. Ryan's mentorship didn't stop there. According to Johnson, Ryan invited him to his house in Alvin, Texas in the off-season for a week to work on some pitching mechanics.

So, how did Ryan's wisdom work for Johnson? After talking with Ryan in August 1992, Johnson immediately threw back-to-back complete games. He struck out 117 batters over his last 11 starts, posting a 2.65 ERA during that span. The Big Unit went on to win 253 games from 1993-2009, five Cy Young awards (including four straight from 1999-2002) and a World Series ring. He's second on the all-time strikeout list behind none other than Nolan Ryan. I guess it pays to have the greatest pitcher of all time mentor you.

MORE: Step Into the Batter's Box and Face a 100 MPH Fastball With The 'Nolan Ryan Cam'