Pat Hoberg, who is considered the best umpire in Major League Baseball, delivered a flawless performance by calling a "perfect game" in Game 2 of the World Series between the Houston Astros and Philadelphia Phillies. Hoberg called all 129 taken pitches correctly, according to Umpire Scorecards, a Twitter account that tracks umpire performance and holds these officials accountable.

At a time when umpires are under scrutiny more than ever and talks of robot umpires have never been more fervent, we should celebrate the greatness that is Pat Hoberg. Why? Because he's the best at what he does. 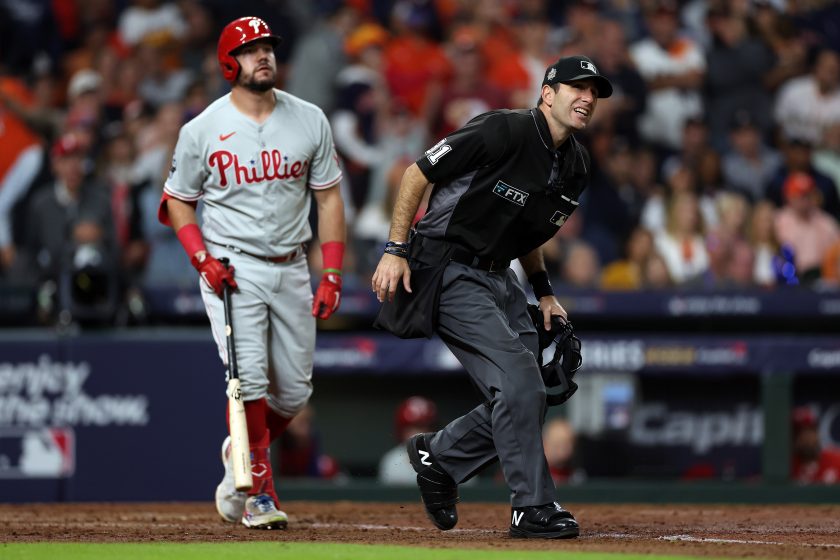 Nobody's perfect, but Hoberg is as close to perfect as we're gonna get.

The 36-year-old also pulled off his perfect feat in his first ever World Series game. Talk about a clutch performance. He was a reserve umpire in Game 1. Considering his sharp eye behind the plate, I'd say MLB should put him back there the rest of the series.

Hoberg has been a model of consistency since earning full-time status in 2017.

Earlier this April, he missed just one call in a game between the Phillies and Colorado Rockies, going 122-for-123. He's had many games like that, and if I'm Hoberg I'm knocking on Rob Manfred's door and asking for a raise.

According to Umpire Scorecards, Hoberg has the best accuracy (95.5%) of any umpire in the big leagues. He's called 4,340 out of 4,545 calls correctly in 31 games this season. The average is 94%. Angel Hernandez is at 93.5% this season. The worst umpire among those with 10 games called is veteran Marty Foster, who has a 91.7% accuracy.

Hoberg's "perfect game" is as rare as it sounds. It's the only one of the 2022 MLB season, and it came in the Fall Classic. It's also the only one that's ever taken place since Umpire Scorecards began tracking umpires in 2015.

All this is to say that Hoberg deserves to be celebrated. Neither fan base can complain that bad strike or ball calls affected the outcome of the game. Of course, the internet fell in love with him afterward.

Pat Hoberg when the robot umpires start to take over pic.twitter.com/8uM6Sy2S32

Live look at Pat Hoberg walking to the podium to take the WS MVP pic.twitter.com/nmdxWbsxZp

Hats off to Mr. Hoberg. We don't deserve you.

MORE: Angel Hernandez is the Worst Umpire in the History of Major League Baseball.