J.T. Realmuto is a catcher for the Philadelphia Phillies. One word that typically isn't associated with the catching position is speed - except when it comes to the Phillies backstop. That extra gear that Realmuto brings to his game may have helped punch a ticket to the NLCS for his team. He also etched his name in the MLB record books at the same time. 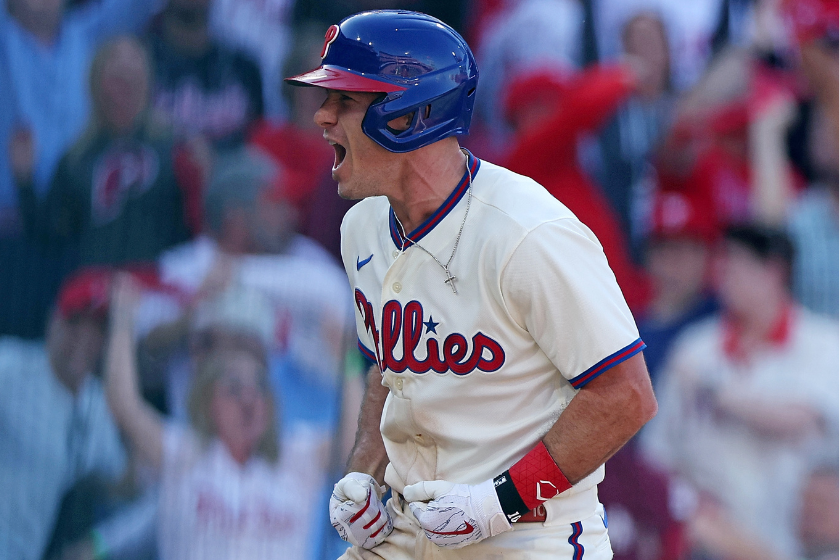 RELATED: The Phillie Phanatic Makes an Insane Amount of Money

In the bottom of the second inning, Atlanta Braves starting pitcher Charlie Morton took a come-backer off his pitching arm. He toughed it out and finished the inning, though he gave up a 3-run home run to Brandon Marsh before heading to the dugout. Morton would return to the mound for the third inning, but after taking his warmup tosses, manager Brian Snitker opted to pull Morton. He went to the bullpen and called for Collin McHugh. The first batter McHugh would face was Realmuto.

With the count sitting at 1-1, Realmuto stepped into the box and took an 81-MPH slider deep to center field. The crowd at Citizens Bank Park instantly rose to its feet, expecting the ball to fly over the wall. To their disappointment, it did not. Instead, it caromed off the wall and kicked toward right field. The ball was hit with such velocity that even Braves center fielder Michael Harris II, one of the quicker players in MLB, was unable to track it down. That problem was compounded by his superstar right fielder, Ronald Acuña Jr., who didn't appear to move much at all when the ball left the bat.

The second the ball got past Harris, Realmuto had home plate on his mind. After all, he'd done it before - hitting an almost identical ball back when he played for the Miami Marlins in August of 2017. Realmuto circled the bases in just over 15 seconds to notch only the 18th inside-the-park home run in MLB postseason history. It also happened to be the first by a catcher. In a sport where the action is becoming more and more scarce, watching the excitement of this play was a breath of fresh air.