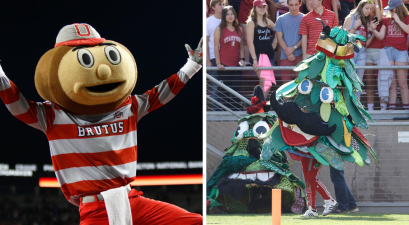 Ben Ancheff took the internet by storm after he became a viral sensation after his appearance for St. Thomas University in the NAIA College World Series. Ancheff, the 300-pound pitcher that blew up on social media in 2015, is a tremendous athlete for his size, playing baseball, football, and wrestling in high school.

Watching Ancheff fire heaters right by batters is an absolute treat and a sight to behold.

Baseball players come in all shapes and sizes 😨 6'2 300 pound college pitcher Ben Ancheff is an example of that. pic.twitter.com/y1HIhLvJNd

According to The Patriot-News he’s “lucky” to have the athletic gifts he has because he’s lucky to even be alive. He was born prematurely — despite weight 8.5 pounds — and didn’t have the heart or lung strength he needed as a baby. Ancheff was given an experimental treatment back in 1992 that kept him alive.

“I was a test,” said Ancheff. “Basically, they told my mom and dad that I’d be dead in a matter of minutes if we don’t try this. They said to try anything to save him. It worked out.

“I’m very fortunate for the doctors over at Hershey Medical Center who saved me. I could never thank them enough for how successful I am. I’ve never had any complications. I’m just lucky. My heart rate’s perfect, like 52, and that’s actually slow. A big guy usually has a higher heart rate.

Ancheff’s story is a great one, but one that almost didn’t happen. We’re glad he was able to thrive as he has because watching him do his thing on the mound is quite the entertaining sight.

To make this news even better, Ancheff made the Major Leagues. Well, sort of.

He had his sights set on pitching on the mound, but he settled for working at Major League Baseball’s Advanced Media headquarters in New York City as a replay administrator. Per PennLive.com, he worked there as recently as 2018.

“It’s 4-5 days a week and days can be long depending on how many replays or umpire challenges come through,” Ancheff told PennLive.com.

“There’s some time-sensitive and crucial information to distribute.”

Ancheff was destined for the majors, proving size doesn’t matter.