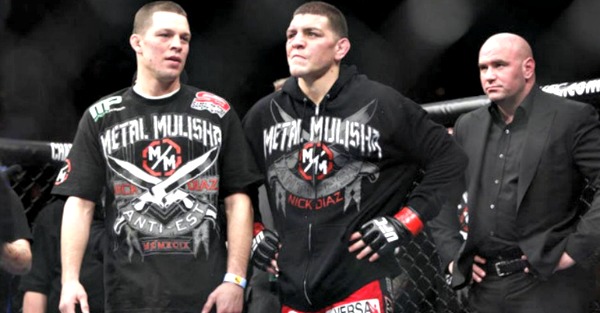 Have we seen the last of Nick Diaz?

“I don?t think Nick Diaz will ever fight again,” he told MMAJunkie. “I just don?t think he has the desire anymore.?

Diaz, a welterweight, has a career record of 26-9 MMA and 7-6 in UFC. He hasn’t fought — inside the Octagon anyway — since January 2015, when he lost to Anderson Silva. But the loss was changed to a no content when both  fighters tested positive for banned substances. The Nevada Athletic Commission suspended Diaz for five years, then reduced the ban to 18 months during a settlement hearing. He was also fined $100,000.

Diaz, 33, has fought outside the ring, through. After his younger brother, Nate, lost to Conor McGregor in last August, Nick Diaz was involved in a wild brawl at a Las Vegas Club. No  one was (seriously) hurt.

He’s also had his share of wild moments, and Bleacher Report chronicled them. Among them: After he lost to Joe Riggs at UFC 57, he went after him in the hospital, and after he blew off several press conferences, White pulled the plug on a title match with Georges St-Pierre at UFC 137.

?The things that you have to do to get to the UFC, let alone break into the top 10 or the top 5 or be a world champion, you have to love it,” White said.” I just don?t think that Nick loves it anymore.?