Furious Conor McGregor in a Twitter battle with his biggest nightmare 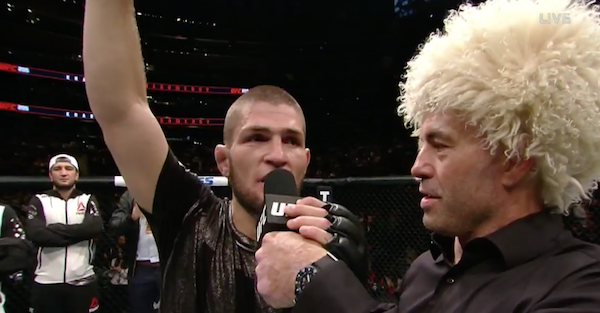 Conor McGregor is the most prominent name in MMA… even if he hasn’t been in action for a while. In fact, the reigning UFC lightweight champion has appeared at the 155-pound level exactly once within the organization (a knockout win against Eddie Alvarez to claim the title) and that inactivity has predictably prompted a lot of buzz and demands that he fork over the title in the form of vacation.

With that said, he does not appear excited to do so and, in the wake of Khabib Nurmagomedov dominating Edson Barboza at UFC 219, McGregor hopped on Twitter in furious fashion to respond to some of those calls for him to vacate the title. In short, he was not particularly impressed by the perceived challenger’s showing and used a few choice words to describe his thoughts.

That Dagestani was dog shit the other night you's are all nuts. Game full of sloppy bums asking to be slept. Pay me my worth and Kings back.

Truly truly truly get on your fucking knees and beg me. Otherwise I don't give a bollox.
My whiskey is out this year and thats Diddy bread.

On cue, Nurmagomedov responded in kind with a two-word message for McGregor.

And one with an emoji:

I slaughter your pets and wear them as coats. And I only wear them once. https://t.co/5IMAc3ysgN

And Nurmagomedov hit him yet again with a shot at his tapping ways:

You can buy them on Gucci store
But in the octagon bear will eat you.#McTapper #🐻vs🐓 pic.twitter.com/O2Qo0HhZab

None of this is particularly surprising, especially on the heels of Nurmagomedov’s chirping following the win that propelled him to an impressive 25-0 record.

Nurmagomedov has called McGregor a “chicken”, and literally DM’d the champ. His shots at McGregor also come after the champ was forced to tap out in the first of two bouts with Nate Diaz at 170 pounds.

Khabib’s weight management issues pulled him from a prior lightweight championship match for the interim title against Tony Ferguson. McGregor could return this summer against Ferguson, and it’s hard to argue against Nurmagomedov’s case for the next shot at whoever the champion is.

In short, nothing will be fully resolved until the moment when the two men square off in a match so, until then, let the fireworks continue and McGregor is uniquely equipped to provide them.