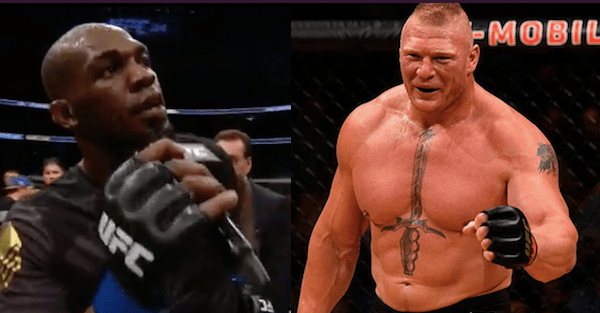 Jon Jones returned to the Octagon after a year layoff to knock out Daniel Cormier to reclaim the light heavyweight championship. After the bout, Jones took the opportunity to tell Lesnar to come back and feel what it feels like to get his “ass” kicked by a fighter 40 pounds lighter.

While the UFC card in Madison Square Garden would be a grand spot for them to show down, Lesnar won’t be eligible to return until December due to his USADA suspension stemming from his victory over Mark Hunt:

Also, if Brock Lesnar has entered the USADA testing pool within the last few weeks, his suspension would be up by 12/30, date of UFC 219.

Earlier this week, rumors spread that Lesnar (5-3 MMA, 4-3 UFC) could face light heavyweight champion Jones upon his return. However, there are several factors that need to be addressed, according to The Wrestling Observer Newsletter‘s Dave Meltzer (subscription required).

“The working plan is for Brock Lesnar to face Jon Jones, provided Jones beats Daniel Cormier this week, with the idea of late December. But that time frame may not work since Vince McMahon would have to approve of any date until April. We were told that Lesnar vs. Jones was the working idea from a number of sources, but one said that it wouldn’t happen that early and would have to be in 2018.”

Jones previously discussed the possibility of facing Lesnar during a UFC Facebook chat this week. The former champion said he’d be interested in the fight, but wasn’t confident it would happen.

“I doubt Brock Lesnar would take that fight, though. I definitely wouldn’t try to wrestle with him the whole time. I’m not going to tell you what I would do.”

“Would I fight Jon Jones? Anytime, anywhere,” Lesnar said. “Right now, he should be worried about ‘DC’ on Saturday night.”

Last week, Meltzer reported last week that Lesnar had gotten back in the USADA testing pool for UFC.

Lesnar was suspended after a July 9th test turned out to be positive and his one-year suspension was frozen in mid-February, which means it still has five months remaining and the former champion won’t be able to compete again until mid-December.

According to Meltzer, the rumors of Lesnar and Heyman visiting UFC’s offices were denied by sources, however, those within UFC did confirm interest in Lesnar making a return to the octagon.