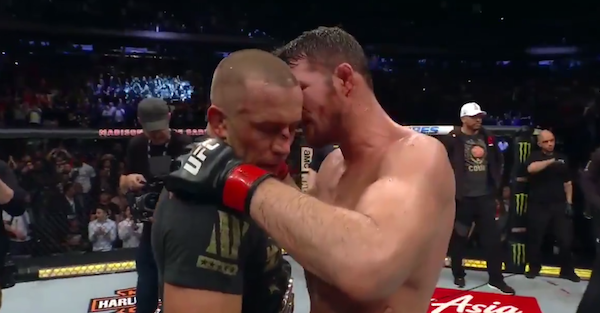 GSP looked as good as he ever has opening up the first round, connecting on stiff jabs and a takedown of the champ.

Bisping slipped an overhand and popped GSP to stun him momentarily. GSP landed the takedown of Bisping, but the champ was able to hip escape.

GSP got the takedown to open the third round yet again. He looked gassed in the second round, and it was an interesting decision to go to the ground, exerting more energy early. From his back, Bisping cut GSP and blood went everywhere. GSP rocked Bisping late, then took his back and choked him out.

It's been 4 years since UFC gold has been around his waist. #AndNew @GeorgesStPierre pic.twitter.com/si3UXeWyi7

GSP returned to the Octagon after a five-year layoff. His last loss came all the way back in 2007, with 13 consecutive wins before the sudden disappearance from the UFC. His last seven fights ended in decision.

After a tense staredown, the fighters refused to touch gloves and the fight was off.

Garbrandt was all over the place, while Dillashaw seemed calm and collected early on. Garbrandt landed a vicious left hook and backed Dillashaw into the cage, then called for him to come forward.

Dillashaw caught Garbrandt with a kick to the body and a spinning backfist. Garbrandt missed wildly, but hit a right to the jaw that sent Dillashaw sprawling to the mat before the end of the round.

OHHH @Cody_NoLove ROCKS Dillashaw at the end of round 1!!! Right hand on the button!! #UFC217 pic.twitter.com/RG2ndJZzlJ

Dillashaw connected on a kick to the jaw that sent Garbrandt falling backwards, but he popped right back up and called for Dillashaw to come forward.

Dillashaw caught Garbrandt again with a swift right hook and sent him sprawling before getting the finish by ref stoppage.

Garbrandt is a heavy-handed finisher, winning nine of his 11 bouts by knockout or TKO.

Dillashaw won two of his last three fights, with his lone loss coming at the hands of former champion Dominick Cruz.

Garbrandt and Dillashaw were once teammates at Team Alpha Male before the latter bounced for Elevation Fight Team.

FanBuzz has coverage of UFC 217 on our MMA page.

Jedrzejczyk made her way to her feet again, but Namajuna connected yet again and finished her. UNREAL.

Namajunas won four of her last five fights, with her lone loss coming as a decision at the hands of Karolina Kowalkiewicz.

Jedrzejczyk won her last four fights by decision, but had previously shown an ability to end her opponents with four knockout victories and one submission win.

Thompson spent much of the first and second rounds jumping in and out, attacking Masvidal and using his length to keep the No. 4 Welterweight at bay. Thompson connected on a nasty overhand left that sent Masvidal sprawling.

Masvidal landed a vicious hook that stunned Wonderboy momentarily, but Thompson was able to continue circling his opponent. Thompson used a strong third round to close out his night, winning by decision.

Costa was just too much for Hendricks, aggressively pursuing Hendricks around the Octagon and hurting him over and again with nasty knees to the body, head kicks and pinpoint precise hands.