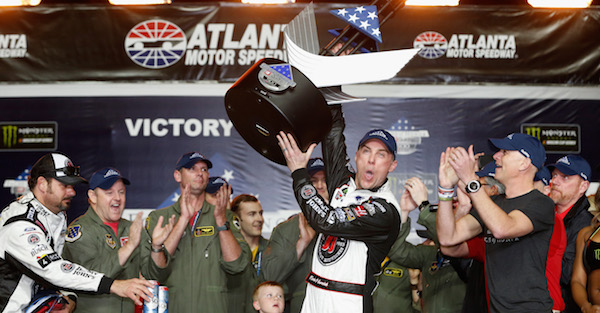 Kevin Harvick has waited 17 years to recreate that special moment from his first win at Atlanta in 2001.

In Harvick’s third career start in 2001, he won his first career race at Atlanta. He’s won plenty of races in between and a Cup Series championship, but he hasn’t been able to replicate that magic from 2001 where it all started until today.

Harvick has dominated at Atlanta the last five years, but he came up just short in each race.

Kevin Harvick has one career win at Atlanta — that famous race in 2001 as a rookie.

He's led at least 100 laps in five of the last six races here and failed to win. 17 laps away from finally getting his second Atlanta win.

Related: Atlanta?s stage one winner got burned by a rule adopted by NASCAR just this season

Just look at these stats from ESPN’s Bob Pockrass. Entering today, Harvick had led 734 laps at Atlanta since 2014 without a win. He led for another 173 laps today ? that’s 907 since 2014 ? and this year he was finally able to secure his second career win at Atlanta.

The win certainly wasn’t an easy one for Harvick. He won the first stage and finished fifth in Stage 2 after Brad Keselowski took home the stage win, but Harvick was challenged by Denny Hamlin and Joey Logano in the final stage of the race.

Hamlin and Logano both tried to use a different pit strategy than Harvick late in the race. They attempted to only pit twice in the last 100 laps, while Harvick used a more regular pit strategy. It was a bold strategy by Hamlin and Logano, and Harvick made them pay as he passed both with 35 laps remaining.

Trevor Bayne’s car started smoking, which led to a caution and a wreck between Bubba Wallace and Ricky Stenhouse Jr. Harvick had a great restart that kept him in first place, and he cruised to the victory.

Harvick earned his 38th career Cup Series victory, and he will almost certainly be back in the playoffs unless he somehow falls outside of the top 30 in the points at the end of the year ? which is highly, highly unlikely.