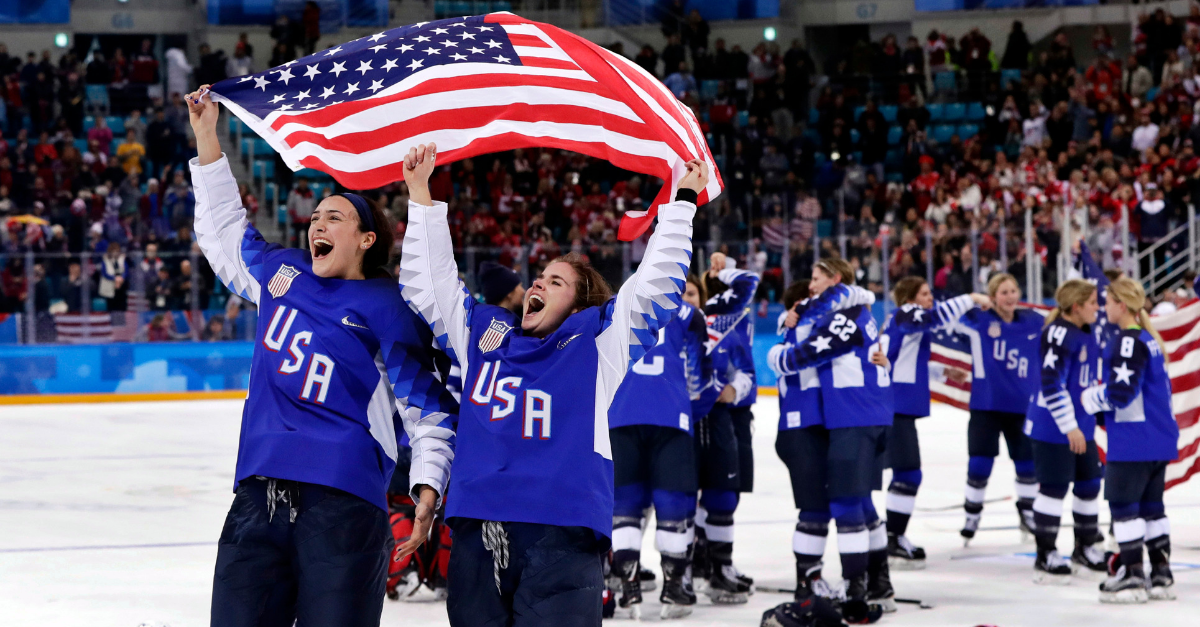 This was a year when many of the most memorable games required working overtime.

There was Alabama’s sudden victory in the college football championship, not to mention the U.S. women capturing Olympic gold in a thrilling hockey shootout.

Of course, we’ll long remember that 18-inning marathon at the World Series. And don’t forget Notre Dame shocking mighty UConn at the women’s Final Four with a last-second shot in extra time.

A look back at the compelling contests of 2018:

Facing conference rival Georgia in the national championship game, Alabama trailed 13-0 at halftime and wasn’t doing much of anything offensively. In one of the gutsiest decisions of his brilliant coaching career, Nick Saban benched quarterback Jalen Hurts and brought in freshman Tua Tagovailoa. The Hawaii-born Tagovailoa threw for 166 yards and three touchdowns, including the winning 41-yard pass to DeVonta Smith in overtime for a 26-23 victory. It was the fifth national title of Saban’s 11-year tenure in Tuscaloosa, and perhaps the most satisfying. “Just a great win,” Saban said. “Unbelievable.”

The two powerhouses of women’s hockey faced off in the gold medal game at the Pyeongchang Winter Games. It lived up to the hype in every way. The United States broke its 20-year gold medal drought and denied Canada its fifth straight title with a 3-2 shootout victory. Jocelyne Lamoureux-Davidson scored for the Americans in the sixth round of the shootout with a dazzling, triple-deke move, sliding the puck past the outstretched glove of Canadian goalie Shannon Szabados. U.S. goalie Maddie Rooney stuffed the last two Canadian shooters to clinch the thrilling triumph. “Joy’s the only word that comes to mind,” said Gigi Marvin, a three-time Olympian and oldest member of the U.S. team.

A fall classic, indeed. The longest game in World Series history finally ended with Max Muncy’s leadoff homer in the bottom of the 18th inning, giving the Los Angeles Dodgers a 3-2 victory over the Boston Red Sox. The seven-hour, 20-minute marathon lasted until 12:30 a.m. on the U.S. West Coast ? and 3:30 a.m. for those still awake back East. Game 3 had a bit of everything: 46 players, including 18 pitchers, and 561 pitches. Never before had a World Series game gone more than 14 innings. In the end, it was the Dodgers’ only highlight of the series. Boston won the title in five games.

UConn was undefeated on the season, with just one loss in its previous 147 games, when the Huskies faced Notre Dame in the Final Four semifinals. In overtime, with the score tied and one second left on the clock, Arike Ogunbowale hit a jumper from the corner that gave the Fighting Irish a stunning 91-89 victory. Ogunbowale wasn’t done, either. Two nights later, she swished a buzzer-beating 3-pointer to lift the Irish to a 61-58 win over Mississippi State in the NCAA championship game.

Case Keenum was down to his final play in an NFL playoff game. His only option was to throw the ball up like he used to do his Texas backyard and hope for the best. Keenum heaved a pass along the sideline to Stefon Diggs, who somehow slithered away from the defense for a 61-yard touchdown that gave the Minnesota Vikings a 29-24 victory over the New Orleans Saints. “”It never ends that way,” Diggs said. “Usually, it’s reality.” The remarkable play shall forever be known as the Minnesota Miracle.

The counterattack. The run. And that dummy! Relive this absolutely EPIC goal … maybe three or four times. We won't tell. pic.twitter.com/Lvi35UYubd

Belgium, one of the world’s’ top-ranked teams, was expected to brush aside Japan in the Round of 16 at the World Cup in Russia. Then, early in the second half, the Asian squad scored two quick goals to grab the lead. The European powerhouse was down but not out. Jan Vertonghen started the comeback with a wild, looping header in the 69th minute. Five minutes later, substitute Marouane Fellaini headed in the tying goal. Finally, in waning seconds of stoppage time, Nacer Chadli capped a remarkable 3-2 victory with an end-to-end attack. The Red Devils became the first team to overcome a two-goal deficit in a World Cup knockout match since West Germany in 1970.

A No. 16 seed had never beaten a No. 1 seed in the NCAA Tournament. Until the University of Maryland-Baltimore County came along. The Retrievers, representing a school better known for chess, etched their name alongside memorable underdogs such as Buster Douglas and the 1980 U.S. men’s hockey team with a dominating 74-54 rout of Virginia. The Cavaliers entered the NCAA Tournament as the No. 1 overall seed after going 31-2 in the regular season. They never had a chance against UMBC. “These are the moments that you dream of,” said Jairus Lyles, who scored 28 points. “It’s always exciting to make history.”

No. 13… The Philly Special! The touchdown that was heard around the world. Doug Pederson Coach of the Year. Nick Foles Super Bowl MVP. pic.twitter.com/FOOgVNohW0

For the first time since 1960, the Philadelphia Eagles could call themselves champion of the NFL. They did it with a thrilling Super Bowl victory over Tom Brady and the New England Patriots that rewrote the offensive record book. Nick Foles guided the drive of a lifetime, capped off by Zach Ertz’s bobbling touchdown catch that had to survive replay review. Then, an exhausted defense came up with two stands in the final moments to preserve the 41-33 victory. “We’ve played this game since we were little kids,” said Foles, the game’s MVP. “We dreamed about this moment.”

With LeBron James scoring 51 points, the Cleveland Cavaliers had a chance to steal Game 1 of the NBA Finals at Golden State. But, after George Hill missed the second of two free throws with 4.7 seconds remaining, J.R. Smith grabbed the offensive rebound and inexplicably dribbled back toward halfcourt instead of shooting. Though he denied it afterward, it seemed clear Smith thought the Cavaliers were leading. Actually, the game was tied. The Cavs never got off a shot, lost 124-114 in overtime and were swept by the Warriors in four straight games. It turned out to be James’ last hurrah in Cleveland; he moved on after the season to the Los Angeles Lakers.

Mighty Barcelona was sitting pretty after a 4-1 thrashing of Roma in the opening leg of the UEFA Champions quarterfinals. Heading to Leg 2 in Rome, the Catalans were riding a streak of 18 straight matches without a defeat. In fact, they had not lost all season in either La Liga or the Champions League. Roma ended that streak in dramatic fashion, building momentum with an early goal, adding another from the penalty spot shortly after halftime and capping the comeback on Kostas Manolas’ header in the closing minutes. That gave the Italian squad a stunning 3-0 victory that sent it to the semifinals on the away-goals tiebreaker.