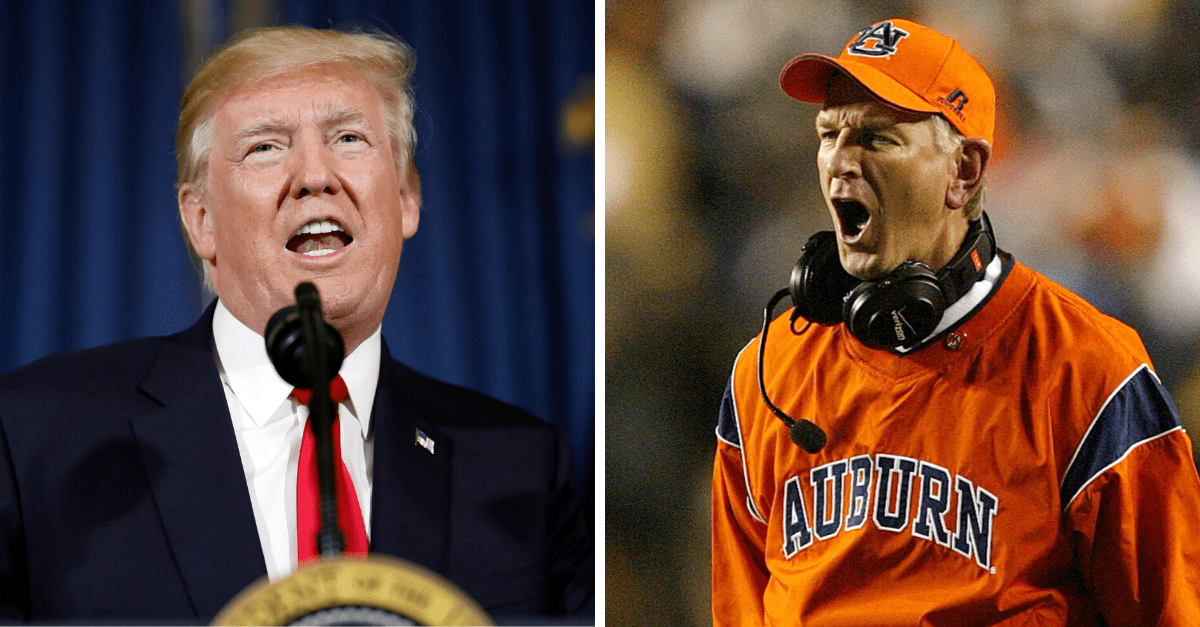 Trump announced his support for Tuberville in a tweet. ?He will be a great Senator for the people of Alabama. Coach Tommy Tuberville, a winner, has my Complete and Total Endorsement. I love Alabama!” Trump wrote. Trump did not mention Sessions in the tweet.

Tuberville and Sessions are competing in the March 31 Republican primary runoff. The winner will face Democratic Sen. Doug Jones, the current incumbent, in November.

Sessions is seeking a return to the Senate seat he held safely for 20 years before stepping down to become Trump’s first attorney general. Sessions resigned as attorney general after their relationship soured over his recusal in the investigation into Russian interference in the 2016 election. Sessions said he was bound by Department of Justice regulation to resign because he played a role in Trump’s 2016 campaign.

….(which is under siege), is strong on Crime and the Border, and truly LOVES our Military and our Vets. He will be a great Senator for the people of Alabama. Coach Tommy Tuberville, a winner, has my Complete and Total Endorsement. I love Alabama!

?Looking forward to helping you drain the swamp and (Keep America Great)” Tuberville responded to Trump in a tweet.

Sessions posted in a tweet that Trump can of course endorse anyone he chooses in the race, but the decision in the Senate race ultimately belongs to voters. Sessions said that even before Trump ran for president, ?I fought for the principles that Donald Trump so effectively advocated.”

?I believed in those principles then, I have always fought for them, and I will continue to do so,” Sessions wrote.

Sessions and Tuberville were the top two vote-getters in last week’s GOP primary, but were forced into a required runoff after failing to capture over 50 percent of the vote.

BREAKING NEWS: @realDonaldTrump officially endorsed my campaign for U.S. Senate. Help me finish what the President started and fire Jeff Sessions on March 31st. Can you donate $5 today and help us win? #MAGAhttps://t.co/GX6Sb08RQj pic.twitter.com/BelrdP76yN

Trump’s endorsement of Tuberville came a week after he appeared to mock Sessions for being forced into a runoff. ?This is what happens to someone who loyally gets appointed Attorney General of the United States & then doesn?t have the wisdom or courage to stare down & end the phony Russia Witch Hunt,” Trump tweeted last week.

Both Sessions and Tuberville have emphasized their loyalty to Trump, and his legislative agenda, as they compete in the GOP primary.

Sessions, who remains a Trump loyalist, has noted that he was the first U.S. senator to endorse Trump and had championed issues such as immigration and trade, even before Trump came to office

?We have this opportunity to turn the Trump agenda into reality, and I am the man for that job,? Sessions said last week at his election night celebration

Tuberville, boosted by name recognition from years as a football coach at Auburn University, has positioned himself as a political outsider and tried to capitalize on Trump’s past criticisms of Sessions.

?We are going to finish what President Trump started when he looked at Jeff Sessions from across the table and said ?You’re fired.'” Tuberville told supporters last week.