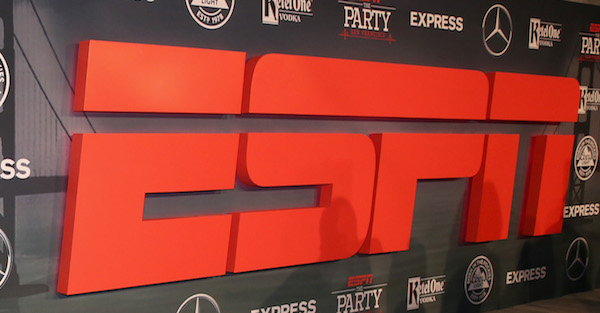 ESPN has found itself caught in the middle of a storm of controversy involving one of its personalities, Jemele Hill, and the President of the United States, Donald Trump.

This is as about as high profile as a skirmish as you can have, and it has gone far beyond sports.

If you’ve been living under a rock for the past few days, here’s the deal: Hill went on a Twitter tirade against Trump, calling him a white supremacist. That led to ESPN apologizing for the comments and publically reprimanding Hill, but that didn’t stop White House Press Secretary Sarah Huckabee Sanders from basically calling for Hill’s job.

For what it’s worth, Hill did apologize for dragging ESPN into her own personal beliefs, but that hasn’t stopped Trump from speaking out on Twitter, which isn’t a shocker:

ESPN is paying a really big price for its politics (and bad programming). People are dumping it in RECORD numbers. Apologize for untruth!

All of this has led to a different President, John Skipper of ESPN, releasing his own statement on the matter. He released a rather lengthy statement to his employes, which was passed on by Sports Illustrated. It’s worth noting that he did mention that it’s hard to just “stick to sports” because of the way sports and American culture intertwine, but he certainly didn’t give Hill a free pass:

I want to remind everyone about fundamental principles at ESPN.

ESPN is about sports.  Last year, we broadcast over 16,000 sports events.  We show highlights and report scores and tell stories and break down plays.

And we talk about sports all day every day.  Of course, sports is intertwined with society and culture, so ?sticking to sports? is not so simple. When athletes engage on issues or when protests happen in games, we cover, report and comment on that.  We are, among other things, the largest, most accomplished and highly resourced sports news organization.  We take great pride in our news organization.

We have programs on which we discuss and even debate sports, as well as the issues that intersect with sports.  Fans themselves love to debate and discuss sports.

ESPN is not a political organization.  Where sports and politics intersect, no one is told what view they must express.

At the same time, ESPN has values.  We are committed to inclusion and an environment of tolerance where everyone in a diverse work force has the equal opportunity to succeed.  We consider this human, not political.  Consequently, we insist that no one be denigrated for who they are including their gender, ethnicity, religious beliefs or sexual identity.

We have issues of significant debate in our country at this time.  Our employees are citizens and appropriately want to participate in the public discussion.  That can create a conflict for our public facing talent between their work and their personal points of view.  Given this reality, we have social media policies which require people to understand that social platforms are public and their comments on them will reflect on ESPN.  At a minimum, comments should not be inflammatory or personal.

We had a violation of those standards in recent days and our handling of this is a private matter.  As always, in each circumstance we look to do what is best for our business.

In light of recent events, we need to remind ourselves that we are a journalistic organization and that we should not do anything that undermines that position.

We also know that ESPN is a special place and that our success is based on you and your colleagues? work.  Let?s not let the public narrative re-write who we are or what we stand for.  Let?s not be divided in that pursuit.  I will need your support if we are to succeed.

The thing to remember here is that while Hill completely has the right to voice her opinion as an American, as an employee for ESPN, she must adhere to her companies policies — and Skipper was clear that being inflammatory on social media is a no-no.

Trump and the White House may not like the fact that ESPN is keeping the disciplinary side of this behind closed doors, but ultimately that comes down to freedom as well. As a private company, ESPN can choose how to reprimand its employees.

Even the President doesn’t have a say in that.