It seems like every season of "The Bachelorette" there's that one contestant who seems bulkier than the others.

This was San Diego Chargers practice squad member Colton Underwood on his first season before he went on "Bachelor in Paradise" and before he became the main contestant on his own season of "The Bachelor." Even this new season has ties to the NFL, with both lead women falling in love with Clayton Echard, who played football at Mizzou and spent some time at Seattle Seahawks training camp, before getting cut from the football team.

Side note: There are no spoilers in the article. We wouldn't do that to you. That's cruel.

Professional Athletes on the Bachelor and Bachelorette 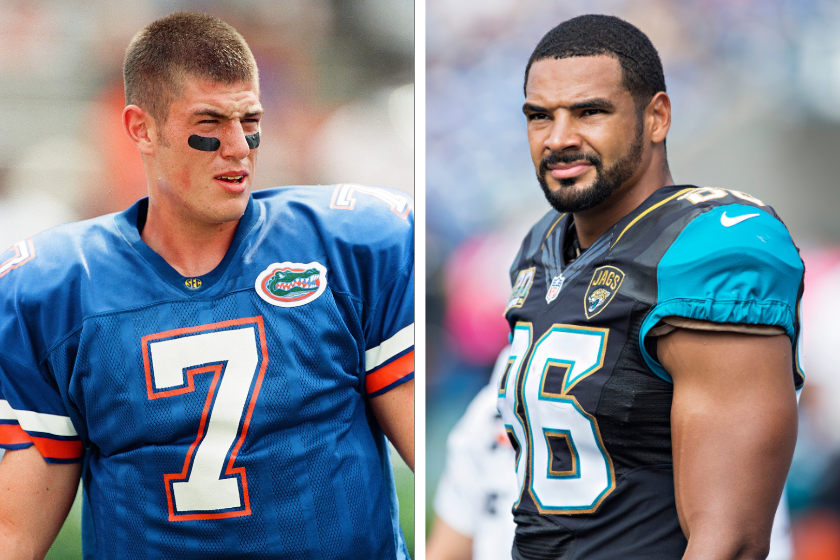 Clare Crawley's choice at the end of her short season, before handing over the reins to Tayshia Adams, was NFL player Dale Moss. Moss played college ball for the South Dakota State Jack Rabbits before making a name for himself on the Green Bay Packers practice squad. South Dakota State actually produced two Bachelorette contestants in Moss and Bryan Witzmann, who was an offensive lineman with the Kansas City Chiefs.

Fan-favorite tight end Clay Harbor narrowly missed out on winning a Super Bowl ring in his football career before stepping out of the limo, which makes him the most successful professional football player in show history. On Katie Thurston's season, we were introduced to Andrew Spencer, who played in Europe with the Dacia Vienna Vikings. A pro football player in Austria? Why not!

Even Bachelor Matt James had Division I college experience as a wide receiver for Wake Forest.

Hell, the show is hosted by former NFL and CFL quarterback Jesse Palmer. There's so much football on "The Bachelor" and "The Bachelorette" that Bachelor Nation should probably just be called "The Other Monday Night Football."

But for the 2022 Summer season of "The Bachelorette" featuring last season's runners-up Gabby Windey and Rachel Recchia as the contestants looking for love, there's Brandan Hall, who played college football at the University of Delaware.

The Carlsbad, California native is taking on ABC's ground-breaking reality TV franchise in the hopes of finding love. Or, at the very least, Brandan (that's Brandan Hall, not Brandon Hall) is looking to rake in some influencer endorsement deals after missing out on NIL fever. That's not a dig at our man, Brandan. It's just how the game is played.

But there are other college athletes on this season as well, and they could prevent the former defensive lineman from leaving the Los Angeles Mansion with a fiancée.

Aven Jones stayed on the hardwood, playing college hoops for the University of Massachusetts Dartmouth. Perhaps Michelle Young will show up to see if he has skills if the girls take a trip to Minnesota.

Jason Alabaster was a two-time NCAA All-American tennis player during his time at Rollins College, according to his LinkedIn.

Jordan Helman touts his adrenaline rush-loving life as a Motocross racer from Pennsylvania.

A different Jordan, Jordan Vandergriff, is an NHRA racer for his father's team, Bob Vandergriff Racing.

While other contestants may have given up on their professional dreams, Kirk Bryant hasn't, as he continues to help shape young football players, as an assistant football coach at Texas Tech.

But all of these sports-minded suitors will have to keep their heads on swivels as other contestants like John Anderson, Johnny Dephillipo, Roby Sobieski, Nate Mitchell, Justin Budfuloski, Erich Schwer, Logan Palmer, Chicago's Colin Farrill, Chris Austin are trying to beat them to the final rose.

Will an athletic beau take be the one getting down on one knee? Or will it be another turnover to the other team? Only time will tell. But one thing is for certain, Gabby and Rachel have a solid group of men, from Tampa, Florida, to Nashville to Illinois to Houston to San Diego, all of which are vying for their affection, and we're excited about the journey.

MORE: Jesse Palmer's Wife Isn't Who He Chose On Season 5 of "The Bachelor"