Dr. Tom Waddell had a vision nearly 40 years ago. He had just attended a gay bowling competition in San Francisco and had an epiphany. Why wasn't there an Olympics..but for the gays?

Waddell himself had an extensive Olympic past -- he was a decathlete at the 1968 Mexico City Summer Olympics and served as Saudi Arabia's team physician at the 1976 Montreal Olympics. He was also living and working in San Francisco as a physician during the AIDS epidemic. He saw an opportunity to create what is now the Gay Games, an international event for athletes that identify as LGBTQ+ and are open to anyone regardless of sexuality or gender.

Dr. Waddell was diagnosed with AIDS in 1985 and passed away in 1987, but his legacy lives on through the Gay Games, an event that is in some ways bigger than the Olympics today.

What are the Gay Games? 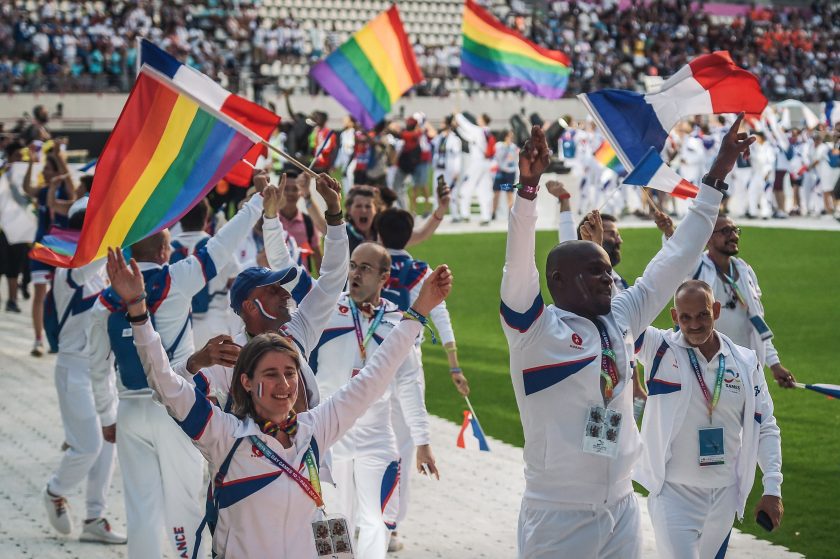 Participants of the French team march onto the field during the opening ceremony of the 2018 Gay Games edition at the Jean Bouin Stadium in Paris on August 4, 2018. (LUCAS BARIOULET/AFP via Getty Images)

The Gay Games is an international sporting and cultural event similar to the well-known Olympic Games that promotes equality, diversity and inclusion. The next one, which will take place in Hong Kong and Guadalajara in 2023, will feature 36 sports.

What's unique about the Gay Games is that anyone -- literally anyone -- is welcome to participate. It was founded on the principles of inclusion and participation, and anyone young or old, experienced or novice and gay or straight can compete.

One example is world champion powerlifter Chris Morgan, who began his record-setting career at the Gay Games.

"The beauty of the games is you can participate in a sport like powerlifting as a newbie in the same environment as Chris," Federation of Gay Games Vice President of External Relations Shiv Paul told KESQ. "You can't do that in the regular Olympics."

The Gay Games have been around for quite some time now, and its history is impressive save for the fact that the United States Olympic Committee sued them early on.

The History Behind the Gay Games 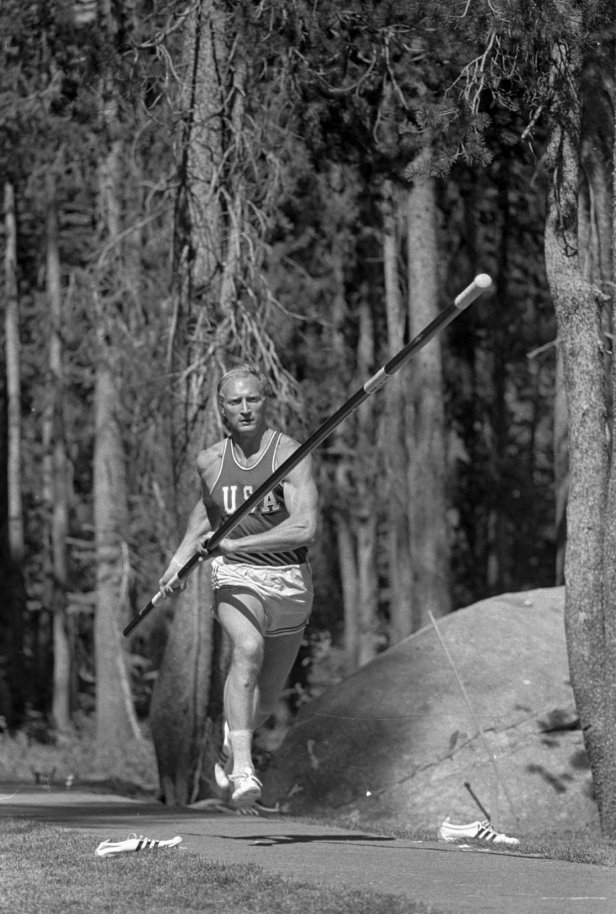 Waddell initially called the games the "Gay Olympics," but the USOC sued his organization over the use of that word just before the first Gay Games would take place in San Francisco. Mind you the USOC hadn't sued other groups that had used the name, but it claimed a "Gay Olympics" would "injure them," according to the Gay Games website.

Nonetheless, the games went on. The 1982 Gay Games took place at Kezar Stadium. Tina Turner performed at the opening ceremony. A whopping 1,350 athletes from 12 countries competing in 17 sports took part.

Every four years, the event grew. It traveled from San Francisco to Vancouver and New York City throughout the height of the AIDS epidemic. The Gay Games, along with the USOC, even pushed the U.S. government to waive a ban on HIV-positive competitors entering the country to compete in 1994 and at the 1996 Atlanta Summer Olympics.

During a time when there was an intense negative stigma attached to AIDS and HIV-positive people, the Gay Games were instrumental in showing that these athletes were strong, healthy people like the rest of the country.

"The formula for success was visibility and identity," Waddell said in a 1982 interview. "And both were right there on the field. We were visible, and we were identified. And what did people see? They saw healthy people, out there, doing something that everyone could understand. They were out there to compete and have fun -- success. That's what the first Gay Games were all about."

The Gay Games is Bigger Than the Olympics in Some Ways 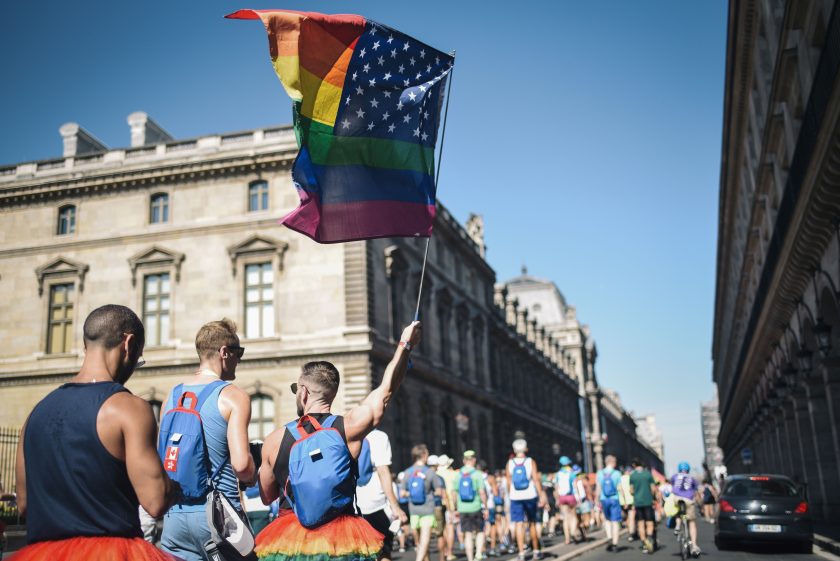 A man waves the rainbow flag as he takes part with others participants in the Rainbow Run, from Paris City Hall to Place de la Concorde during the opening day of the 2018 Gay Games in Paris. (LUCAS BARIOULET/AFP via Getty Images)

Sure, it might not have a multi-billion dollar TV contract with NBC, but the Gay Games is a massive event that has truly created an international community of LGBTQ+ athletes. And hey, it did secure a $3.2 million broadcast rights deal in 2004.

The 1994 Gay Games in New York City, which coincided with the 25th anniversary of the Stonewall Riots, was a perfect example of that. A total of 12,500 artists and athletes from 40 countries participated in 31 sports. Olympians and celebrities joined the cause, too. Greg Louganis, who famously hit his head on the diving board in 1988 and still won gold, served as an announcer for diving events. 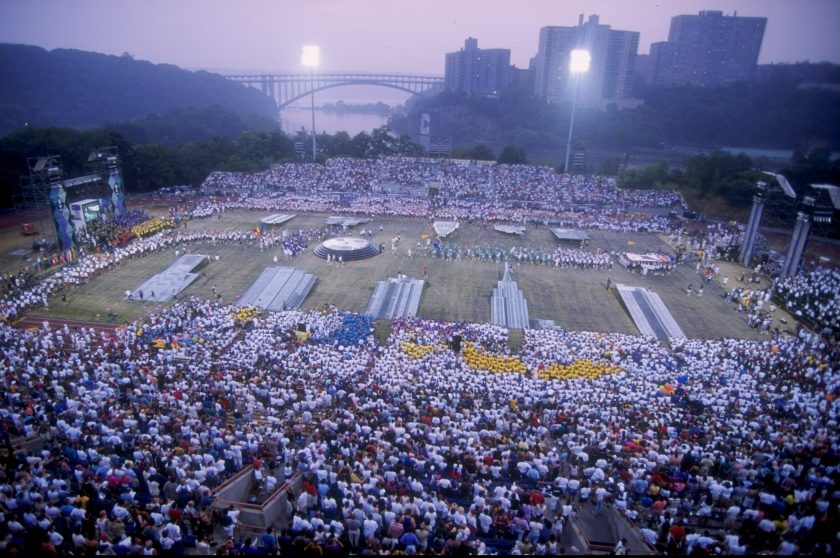 By 1998, the Gay Games was hosting 13,000 participants in Amsterdam. Today, the games are stronger than ever. After the COVID-19 pandemic, you can expect plenty to show up for the 2023 Gay Games. 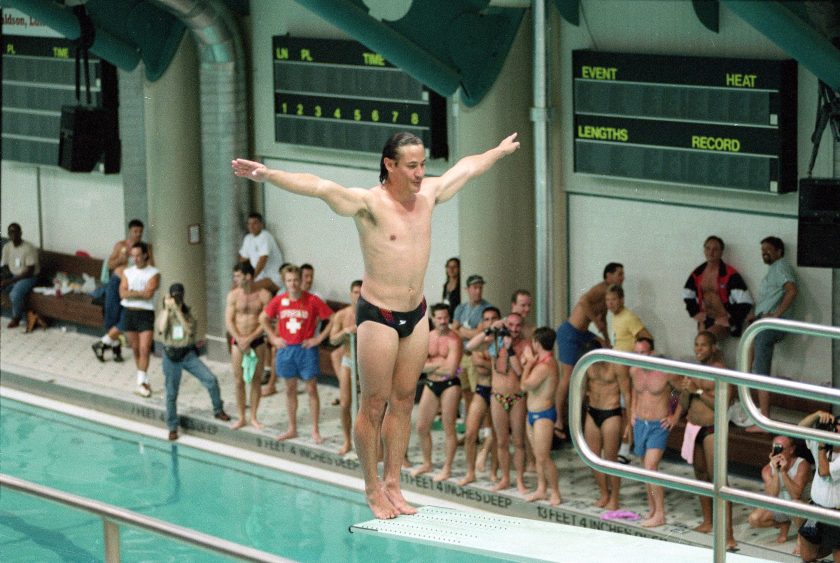 Greg Louganis prepares to dive off the 3-meter springboard during the diving competition of the Gay Games IV in New York City, June 20, 1994. (AP Photo/Chrystyna Czajkowsky)

RELATED: Glenn Burke, Tommy Lasorda and a Messy History of Silence from the Dodgers

A number of notable athletes have participated in the Gay Games throughout the years in some capacity.

Greg Louganis publicly came out at Gay Games IV in 1994. Glenn Burke, the MLB's first known gay player, competed in the 1982 Gay Games in track. He returned in '86 and competed in basketball. World champion powerlifter Chris Morgan began his career at the Gay Games. Swimmer Jim Ballard even set a world record in the 100-meter backstroke at the 2002 Gay Games.

Why the Gay Games Matter 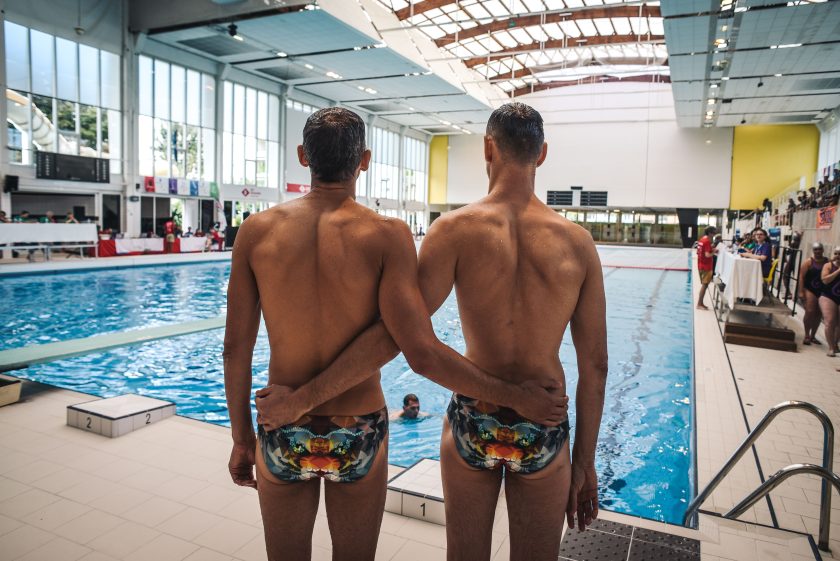 Participants wait for results during the synchronized swimming contest during the 2018 Gay Games at the Maurice Thorez swimming pool in Paris. (LUCAS BARIOULET/AFP via Getty Images)

Dr. Waddell had actually been inspired to create the Gay Games after he watched 1968 Olympic medalists Tommie Smith and John Carlos raise their fists on the podium to protest racism. The Gay Games were a protest of sorts too, showing that LGBTQ+ athletes are just as capable. It was, as he said, about visibility.

That's more evident than ever. There were at least 186 out athletes competing in last year's Tokyo Olympics, which was easily a record. Those athletes captured 32 medals, 11 of which were gold, which was more than countries like France, Germany and Italy if they were their own team.

Another reason the Gay Games are important is because homosexuality is still illegal (and in some places punishable by death) in many countries across the globe. In fact, 20 of the 91 nations represented at the last Gay Games criminalize homosexuality, including Egypt and Saudi Arabia. The Gay Games give queer athletes a place to feel safe and welcome while offering a universal message of unity.

It's where a same-sex couple can make you cry skating to "Hopelessly Devoted to You" wearing matching sleeveless denim jumpsuits, while the Olympics doesn't even allow same-sex couples to skate together. It's where a trans basketball player from Uganda can shine despite coming from a country that criminalizes homosexuality. And it's time more people knew about it.

MORE: The 14 NFL Players Who Came Out After Their Playing Careers