This Young Boston Sports Fan Has Lived Quite a Lucky Life 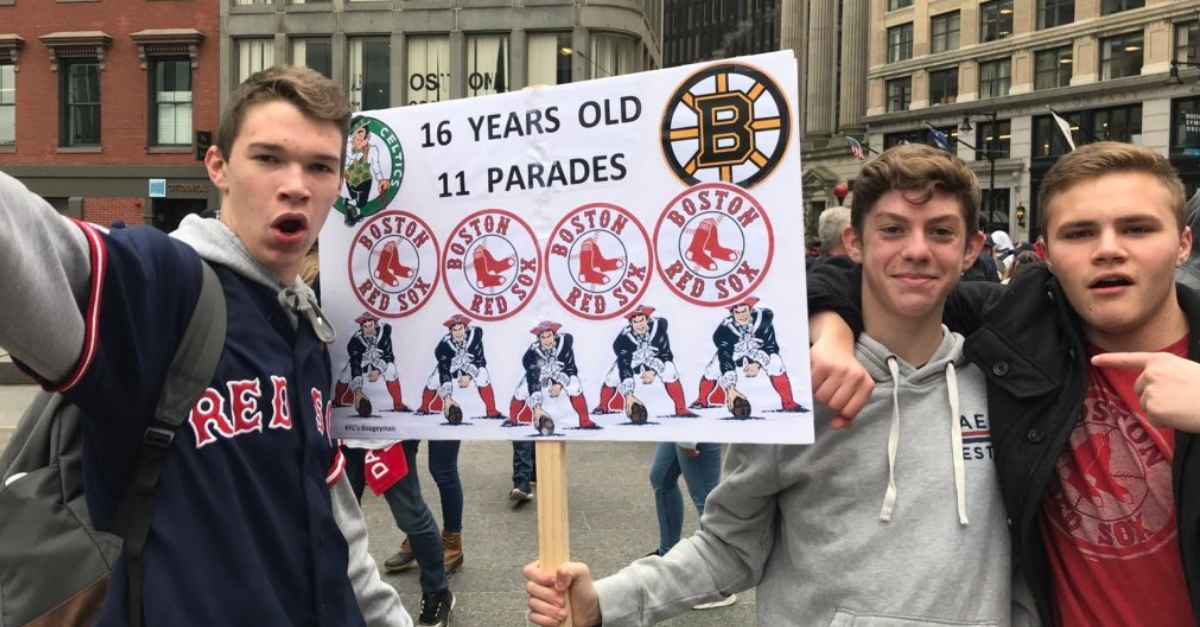 Since 2002, it?s safe to say Boston has owned sports. From the New England Patriots to the Boston Red Sox to the Boston Celtics to the Boston Bruins, the titles have stacked up in a hurry. One young sports fan reminded the world how lucky the city has been.

The celebrations at City Hall Plaza started back in 2002 after the Patriots won Super Bowl XXXVI and continued Wednesday after the Red Sox beat the Los Angeles Dodgers to win the 2018 World Series.

Jason McKeon, a 16-year-old from Haverhill, Massachusetts,  has been alive for 11 titles already and was back for his eighth (!!!) parade in Beantown and had a sign to prove it.

This kid is a legend! pic.twitter.com/W4mQnry3vO

In fact, the young man also known as ?Sign Kid? has been showing up to these parades with a new sign for years.

Already updated … Jason M. from Haverhill sent it to me last night.

San Diego and Buffalo have waited over 50 years each since its city?s last title. Vancouver, Milwaukee and Portland have waited over 40 years, while Winnipeg, Salt Lake City, Sacramento, Charlotte, Calgary, Orlando, Edmonton, Cincinnati, San Jose, Minneapolis, Ottawa, Montreal, and Toronto all have droughts of at least 25 years.

McKeon has been alive for 11 titles in 16 years.

Must be nice, right?

Whether you love or hate the NFL, MLB, NBA, or NHL, it?s more than impressive for one city to boast so many championships in just a short amount of time:

What?s even crazier is the titles the city has lost in that span, too.

It?s almost sickening one city has enjoyed so much success and there?s even a possibility McKeon sees a couple more parades before he even graduates.