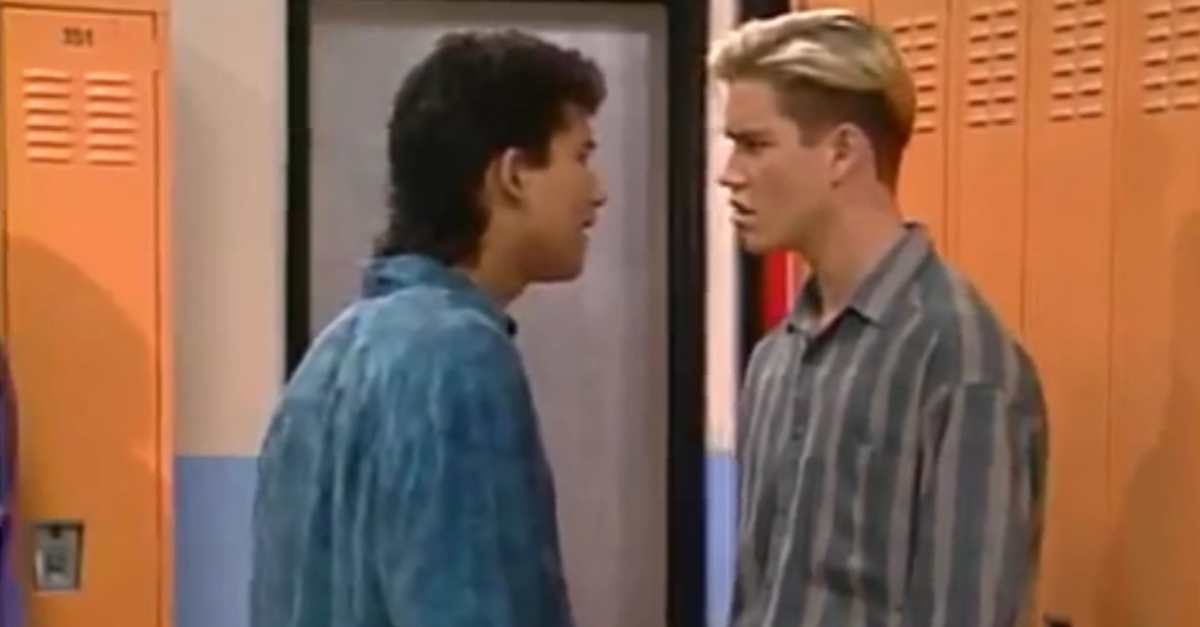 Once upon a time in the famous hallwayS of Bayside High School, Zack Morris and A.C. Slater got into the scuffle of all American sitcom scuffles. The two best friends from NBC?s Saved by the Bell were busy all week ruining each other?s dates with the new girl at school, so the two decided to duke it out real quick in front of everyone. Turns out, it was a precursor for what was to come later in life.

At the time, it was a big deal. Both Zack (Mark-Paul Gosselaar) and Slater (Mario Lopez) were crushing over Joanna Peterson. After some trash talk at The Max, their favorite hangout spot, Slater had ruined Zack?s study date, so Zack had Slater?s mom show up to his date at the movies.

This was very classic 1990s drama, but it ultimately led to Zack landing a right hook and Slater, a badass wrestler who always beat rival Valley, took down Preppy before Principal Richard Belding broke it up.

Luckily, the two made up and the rest of the crew of Screech Powers (Dustin Diamond), Kelly Kapowski (Tiffani Thiessen) and Jessie Spano (Elizabeth Berkley) made it to graduation as best friends. But that fight was really a rare thing and something many fans still remember today.

What?s crazy is both Zack Morris and A.C. Slater actually fight now in real life. The two actually train for MMA together, over 30 years after that fateful episode.

Mario Lopez, now 45, broke it down on an appearance on The Ellen DeGeneres Show:

?We?re both blue belts in jiu-jitsu and he hit me up about wanting to train so we started working out together, and now we beat each other up often. It?s funny because we had an old fight scene that is now somewhat a little iconic just because it was so realistic and I want to take choreography credit for that because I kind of staged the whole fight. Now we are actually doing it in real life. It?s fun I love that I?ve remained friendly with my former cast mates on Saved by the Bell. We get along real well.?

So there you have it. Zack Morris and A.C. Slater are still boys and it?s as amazing now as it was back in the day.

READ MORE: Justin Bieber Challenged Tom Cruise to a Fight, And Man, We Need to See This