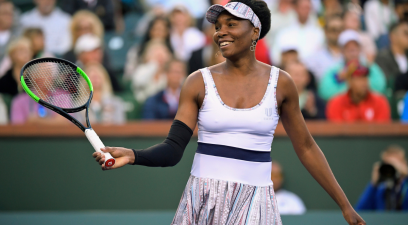 Venus Williams Stripped Down for ESPN’s “The Body Issue” The news of New England Patriots owner Robert Kraft‘s alleged involvement in a massive prostitution sting in Jupiter, Florida shook everyone in the sports community in 2019. It’s massive for one of the most respected and well-liked sports figures in the world to even be a part in something of this scale. Lost in the swarm of who paid what money are the men and women bought and sold as the vessels for human trafficking in this country every day, and they deserve to be helped amidst this chaos.

Throughout the years, professional athletes — just like many regular people who aren’t in the spotlight — have been charged with soliciting a prostitute, both in small-scale incidents and large busts. Here are 11 sports figures who have been connected to some illicit behavior during their professional careers.

The high-profile golfer’s former problems with women are well documented. In 2009, Hollywood madam Michelle Braun told the Daily News that Woods spent more than $60,000 to spend multiple nights with a woman named Loredana Jolie, as well as other women.

Back in February 2015, a police video obtained by TMZ Sports showed the Pro Football Hall of Famer admitting how he picked up two women prior to the Super Bowl that year. In the video, Sapp says, “I put the $600 dollars on the table, everybody got naked.” Not exactly a good look to be arrested as a television personality. Sapp was later fired by NFL Network.

In 2009, Kristin Davis — the same woman who supplied prostitutes to former Governor of New York Eliot Spitzer — alleged that she provided women to the former New York Yankees slugger, and even dated him for a period herself. A-Rod denied the claims and was never charged in court despite email exchanges that later surfaced apparently connecting the two.

The two-time Super Bowl champion with the New York Giants pled guilty to two counts of sex-related charges, including with a 16-year-old prostitute who told Taylor she was 19. He didn’t serve jail time, but did receive probation and had to register as a sex offender.

Strawberry was one of the most gifted players in baseball in the 1980s playing for the New York Mets. In 1999, however, the slugger was charged with possession of cocaine and soliciting a prostitute when he offered an undercover cop $50 for sex. After he retired, Strawberry admitted to leaving the clubhouse during games to have sex with women he’d point out in the crowd.

Sir Charles is one of the NBA’s most popular figures, but during 2008 DUI arrest, he admitted to receiving oral sex from one woman and had just picked another up after running a red light. The current NBA on TNT commentator was only charged with two DUI-related accounts and was back on television after a brief hiatus.

After a World Cup qualifying match back in 2009, members from the Czech Republic soccer team were photographed with several girls, which were published in two local tabloids. Six players and the club’s coach, Petr Rada, were all dismissed from their roles, as well as the entire national management team being fired.

The Los Angeles Lakers star was arrested in November 1990 on two counts of solicitation of prostitution. Worthy was arrested prior to a game in Houston, but joined the team later that same night after posting bail to score 24 points in an overtime win. He received a small fine and probation for the incident.

One of the biggest single incidents occurred when 17 members of the Vikings football team rented two houseboats, flew prostitutes in for a party, and multiple players allegedly performed sex acts on the women in front of crew members during the cruise. Defensive back Fred Smoot and offensive tackle Bryant McKinnie pled guilty to misdemeanor charges for the incident.

Aside from multiple women the current D.C. United forward Wayne Rooney was connected to throughout the years, it was one woman who he allegedly paid thousands of dollars each time they met over a four-month period that was the biggest. Oh, he was also doing it while his wife, Coleen, was pregnant.

The most recent addition to this list is Mr. Kraft, who is facing charges for a multi-month investigation that exposed illicit activity at the Orchids of Asia Day Spa. Video evidence of 77-year-old Kraft paying for sex exists, according to police. The Patriots owner has denied these claims, but more details from the state attorney’s office in Florida will emerge as the spotlight of the sting continues to widen.