President Trump Isn’t Big on California. That Goes for His Super Bowl Pick, Too 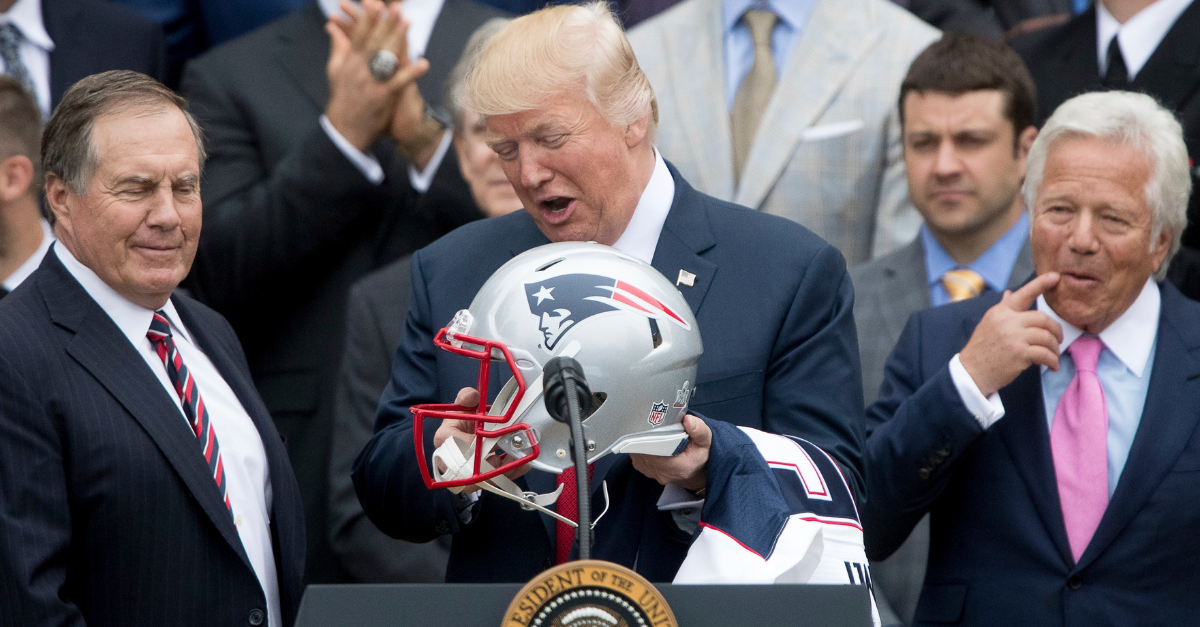 There are few jobs as demanding as being the President of the United States. No matter which side of the aisle you represent, condemnation and disapproval rains down from every corner of the country. In the midst of the longest government shutdown in U.S. history, President Donald Trump is no stranger to making unpopular decisions to achieve what he believes is the right outcome.

Those decisions also spill over into the sports world. President Trump hosted a fast food feast to celebrate Clemson Tigers’ national championship, and some people still found reason to criticize him for it. After the NFL’s championship weekend was over, well, only one team received congratulations from The Donald, and that started an entirely new conversation.

The New England Patriots used some help from the referees to survive the Kansas City Chiefs, 37-31, in the AFC Championship game at Arrowhead Stadium. The Pats are headed to their ninth Super Bowl under head coach Bill Belichick and quarterback Tom Brady, and their biggest fan happens to fill the biggest seat in the Oval Office.

Congratulations to Bob Kraft, Bill Belichick, Tom Brady and the entire New England Patriots team on a great game and season. Will be a fantastic Super Bowl!

Now, there’s nothing out of the ordinary about a sitting president sending out a congratulatory tweet for a team after winning a championship. Past leaders have done the same, but this one came with one interesting caveat after Sunday night’s games.

President Trump didn’t congratulate the Los Angeles Rams for winning the NFC Championship game over the New Orleans Saints. In fact, he didn’t say anything at all. As you’d expect, a swarm of conspiracy theories descended from everywhere after Trump’s simple gesture to congratulate owner Robert Kraft.

since trump took office, the patriots have never missed a super bowl.

@realDonaldTrump has already started preparations to host the next #SuperBowl champs. pic.twitter.com/xJnX6VyTUR

THE GAMES ARE RIGGED! Sanctuary State California (Rams) and Make America Great Again (Patriots). The games were rigged so that these two teams be in The Super Bowl. Sanctuary State will win it – subliminally suggesting Democrats will defeat Trump in 2020. #AFCChampionship

Throughout his presidency, Trump has consistently been at odds with California, so it’s no surprise people were taken back by his one-sided Super Bowl shoutout. While fires raged across the state, Trump tweeted how California’s forest management needed to “get their act together” or he would pull federal funding. The state has resisted numerous policies during his administration including climate change and sanctuary cities as well. All things considered, maybe Los Angeles, California needed to meet Trump in the middle?

However, it’s not like Los Angeles Rams owner Stan Kroenke is any slouch when it comes to supporting Trump. Back in 2017, the Rams owner donated $1 million to Trump’s inaugural committee, which is the same amount Patriots owner Robert Kraft did.

The real explanation, though, is so much simpler.

Both the Commander-In-Chief and Kraft longtime friends, so this really shouldn’t come as a surprise. Kraft, who is a life-long Democrat, told the New York Daily News about the pair’s relationship after his wife, Myra, died back in 2011.

“When Myra died, Melania and Donald came up to the funeral in our synagogue, then they came for memorial week to visit with me. Then he called me once a week for the whole year, the most depressing year of my life when I was down and out. He called me every week to see how I was doing, invited me to things, tried to lift my spirits. He was one of five or six people that were like that. I remember that.”

The backlash from a simple tweet is simply incredible. Trump congratulated a friend, who may just show up at the White House for a Super Bowl LIII victory celebration if New England knocks off Los Angeles on February 3 in Atlanta.

For the time being, those in California just have another reason to knock Donald J. Trump for his use of social media.

READ MORE: Tiger Woods Was All Class When Asked About Donald Trump