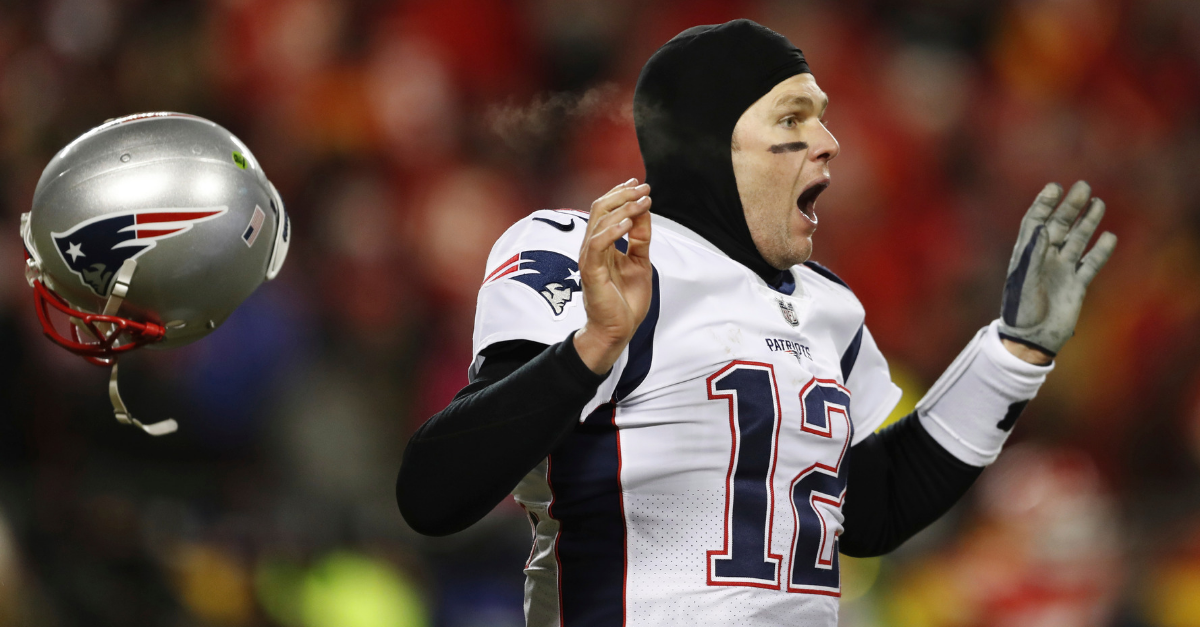 The New England Patriots entered the AFC Championship game with a 3-5 record playing on the road this season. With a Super Bowl LIII berth on the line, the Patriots started the second half of Sunday’s title game at raucous Arrowhead Stadium with four-straight series resulting in only three points: Punt, field goal, turnover on downs, and an interception.

Their fifth drive, however, changed everything.

That fifth drive started with 7 minutes, 45 seconds left in the game after the Kansas City Chiefs scored to take a 21-17 lead. On 2nd-and-7, Patriots quarterback Tom Brady dropped back and sent a short pass towards receiver Julian Edelman. The ball fell incomplete, but one of the worst penalties of championship weekend gave New England new life and took the wind right out of Kansas City’s sails.

Thanks to what can only be described as the worst roughing the passer call in NFL postseason history, New England earned a free 15 yards and a fresh set of downs. Chiefs defensive lineman Chris Jones reached over left guard Joe Thuney and basically gave Brady a high-five to his chest.

Instead of third down and long, New England was now threatening near midfield.

By rule, this should be a penalty if Jones makes contact with the “head or neck area” of the quarterback. Last I checked, a graze of the chest is not roughing the passer.

The Chiefs’ defense was gassed. In that AFC title game, New England ran 94 plays compared to Kansas City’s 47 while Bill Belichick’s team possessed the football nearly 70 percent of the game. Somehow, the Chiefs were ahead early in the fourth quarter and trying to hold off what became yet another classic Brady comeback victory, and this call early in that fifth series changed the momentum of the game. Kansas City was clinging to life, and seeing yet another domino fall towards New England sucked the life out of Andy Reid’s defense on Sunday night.

The worst part, aside from the obvious blown call, was that the officials were anything but consistent. Earlier, Chiefs quarterback Patrick Mahomes was clobbered around the neck area by New England’s Tre Flowers, but that penalty wasn’t called.

This is exactly the same action Brady got a roughing call on pic.twitter.com/rZX70L7M3T

RELATED: NFL Doubles Down on Controversial “Roughing the Passer” Rule

With under one minute to play and Kansas City holding a three-point lead later in the game, Tom Brady sent a short pass towards Hall of Fame tight end Rob Gronkowski. The ball sailed high, tipped off Gronk’s hands, and fell right into the lap of Charvarius Ward for a massive interception that could have ended the game.

That is, it would have sealed the deal if defensive end Dee Ford wasn’t called for a neutral zone infraction. Two plays later, that Patriots drive finished in the end zone to take the lead once again.

You can decide for yourself, but many aren’t convinced Ford was even offsides to being with.

On Monday, Chiefs coach Andy Reid discussed Dee Ford’s penalty and the decision by the official to throw the flag despite not warning Kansas City first, which is typically what would happen before a penalty is called.

“Normally, you’re warned and the coaches are warned if somebody is doing that before they throw it in a game of that magnitude. But they did. And he didn’t waste any time doing it. He didn’t wait until the interception to throw it. He had his hand on the flag right from the get go and he saw it from his angle and he thought it was the call.”

Kansas City had rallied from 14 points down to take the lead, but with New England back in business thanks to one horrible call, the air was sucked out of Arrowhead Stadium. From that point on, the flood gates opened as every drive by both teams ended with a score to close the game, including New England’s 13-play, 75-yard masterpiece in overtime to win it, 37-31.

While many crucified the NFL’s overtime rules for Kansas City not getting a chance to match New England’s touchdown drive in OT, this is professional football. If you can’t stop a team, you don’t get a second chance. Football is played in three phases of the game. New England dominated late, and they squeaked out the overtime win.

Then again, none of that could have transpired without the phantom roughing the passer penalty that started it all.

New England will meet the NFC champion Los Angeles Rams in Super Bowl LIII in Atlanta. On February 3 at 6:30 p.m. ET on CBS, the Patriots and Tom Brady will go for their sixth Super Bowl title since the 2001 NFL season.