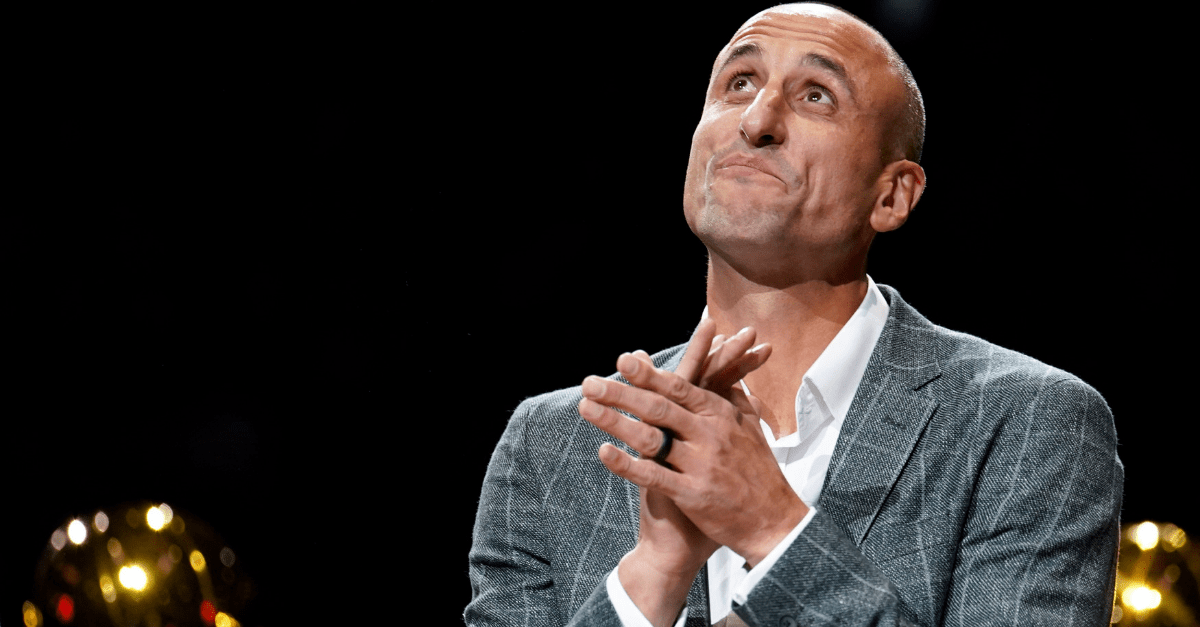 SAN ANTONIO (AP) — Manu Ginobili would’ve been happy to quietly retire without the Spurs retiring his jersey. San Antonio coach Gregg Popovich said the humble Argentinian had no choice but to accept it with the same passion he gave to the game.

The Spurs retired Ginobili’s No. 20 following a 116-110 victory over the Cleveland Cavaliers on Thursday night. He and Bill Bradley are the only players to win an NBA championship, Euroleague title and an Olympic gold medal.

“What am I doing here,” Ginobili said. “I had no expectations of being here when I was growing up.”

🎶 Explosions in the Sky (@EITS) pic.twitter.com/4Ncpm64sR8

Ginobili won four NBA titles with the Spurs. Despite all his accomplishments and talent, he accepted a role coming off San Antonio’s bench for all but 349 of his 1,057 games during his 16 seasons with the Spurs.

“To me, he’s the definition of Spurs basketball because he had no ego,” former Spurs point guard Tony Parker said.

Parker and Tim Duncan honored the fellow Big Three star during a funny and heartfelt ceremony that also included speeches by Popovich and former Spurs and Argentina teammate Fabricio Oberto.

While Ginobili’s jersey now rests alongside those belonging to Johnny Moore, Avery Johnson, Bruce Bowen, James Silas, Tim Duncan, Sean Elliott, George Gervin and David Robinson, the thousands of No. 20 jerseys worn by the fans in attendance is proof he remains dear to their hearts.

“His presence off the court was always something special,” Popovich said. “The people here took him in as one of their own and he allowed it to happen. He’s a very warm individual and understood his responsibility to the community. It was a great marriage from day one to this day.”

Ginobili spent his entire NBA career with the Spurs, where he became arguably the most beloved player in franchise history.

“First time I’m on the court, you guys are cheering and chanting my name and I felt like you guys had my back,” Ginobili said, thanking the sellout crowd.

Gervin, Robinson, Duncan and Parker are among the most popular, but none captured the city’s devotion as much as Ginobili. His ability to speak Spanish in a city predominantly Hispanic played a part in his popularity, but his humility, recklessness and fire endeared him to the team’s rabid fan base.

“Because he’s always 100-percent natural,” former Spurs forward Boris Diaw said. “He just had a great connection with the fans, he spent a lot of time with them. He would never say no to take a picture.”

Ginobili’s introduction to the team was inauspicious. The Spurs drafted a then-unknown Ginobili with the 57th pick of the 1999 draft and let him stay in the Euroleague for a few more seasons.

But it quickly became apparent what San Antonio had from the moment the mop-topped 25-year-old stepped onto the court against the Los Angeles Lakers on Oct. 29, 2002.

“He was like a mustang out in the field somewhere,” Popovich said. “That’s how he lived his life on the court. He was fearless and wild and did things that won games.”

Popovich said Ginobili helped him become a better coach, taking a step back and not nitpicking. Even if meant watching a pass sail into the stands.

“Nobody can control Manu,” Parker said. “Manu is going to be Manu.”

Ginobili also displayed an offensive style that has been adopted by an entire generation. His breakneck Euro-step, wrap-around ballhandling, hard fakes and step-back 3s have been adopted by players such as James Harden.

“Manu brought something new, something different and a lot of young guys at the time look at him — trying to copy it and seeing that it was working,” Diaw said. “So, I think it’s the guys we see now on the court are the young guys (watching Ginobili) from a few years ago.”