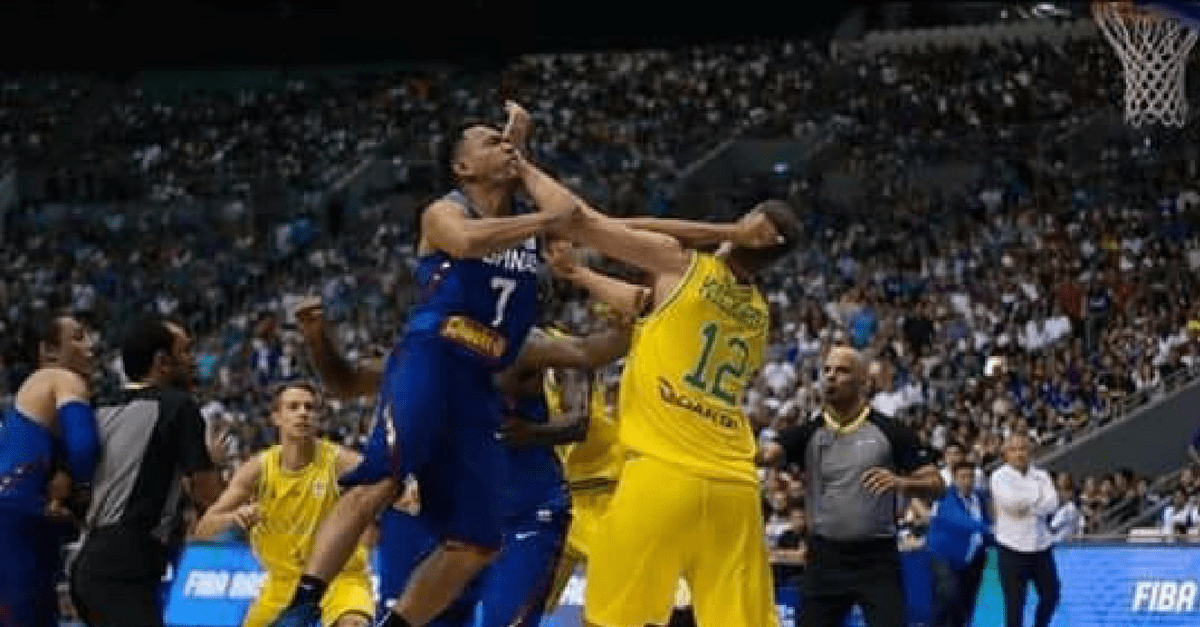 What first looked like a simple, cruising basketball victory turned into absolute mayhem. For a few moments, the Philippines Arena was a brawling circus and it wasn?t pretty.

In the third quarter of FIBA World Cup qualifier between Australia and Philippines, a hard foul led to a massive, bench-clearing fight and 13 ejections.

The fight started when Roger Ray Pogoy (Philippines) hit Chris Goulding (Austrailia) in the face before Daniel Kickert attacked Pogoy with an elbow. The benches cleared and the rest is history.

It was straight out of control and included some NBA players.

Here's the crazy, violent brawl from the Australia-Philippines game. pic.twitter.com/hSpEyyjU7u

Once everything finally calmed down, nine Philippines players and four Australia players were ejected, including Milwaukee Bucks forward Thon Maker, who plays for the Boomers.

Apparently, many inside the arena could see this coming. According to Camille B. Naredo, tempers flared much earlier when the Philippines called out Australia for removing the sponsor decals from the floor.

Aussie team ripping our/Fiba logos on the court of Phil Arena w/o asking permission. We will not back down. Those stickers go in. Regardless. pic.twitter.com/LMwyiBNtG4

Perhaps the strangest thing of all was how the game ended. The Philippines only had three players ? Baser Amer, June Far Fajardo, and Gabe Norwood? remaining following all of the ejections. Then, after Norwood and Fajardo fouled out, Gilas was disqualified and Australia won by default, 89-53.

A very ugly sight indeed, and the basketball brawl looks even worse in slow motion.

Things got crazy between Australia and the Phillipines, basketball turned UFC pic.twitter.com/cDr9ugTig9

Goulding finished with a game-high 20 points, while Kickert added 12 for the Boomers, who now lead in Group B. Blatche notched 12 points and 10 rebounds for the Philippines.

The result was important, of course, but the massive brawl outweighs everything and now all the players can do is wait and see what types of punishments will stem for the incident.