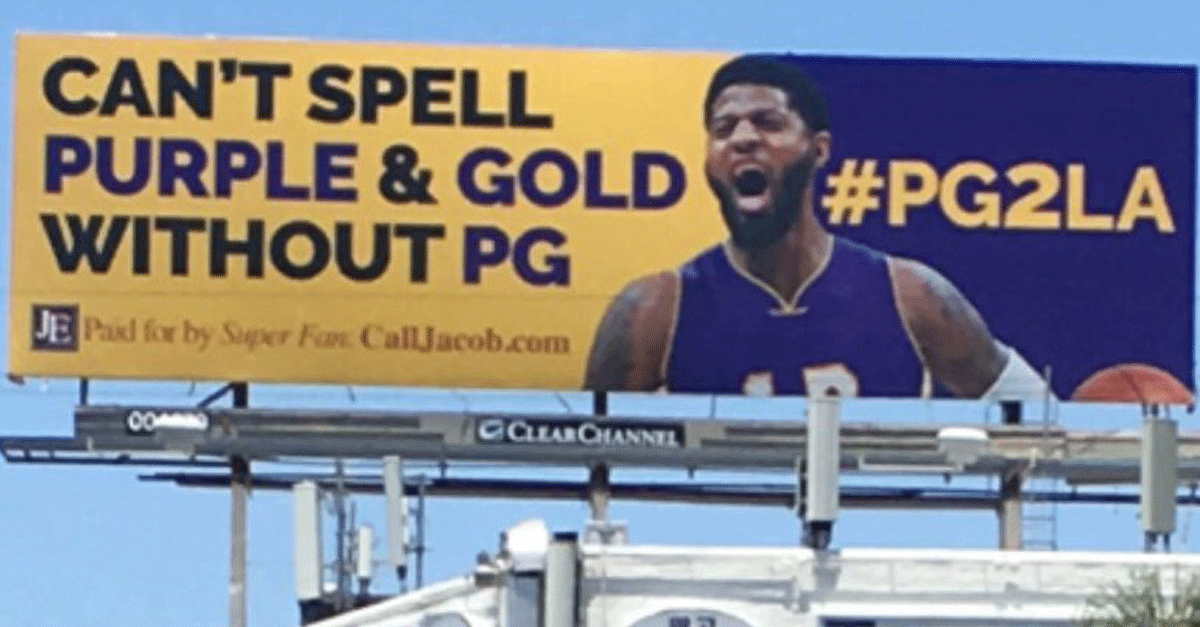 NBA free agency is truly a gift that keeps on giving.

No matter the team, player, or fan base, the rumor mill is thick and recruiting pitches are creative and sometimes downright crazy.

Although teams are unable to speak to free agents until the weekend, some fans have taken matters into their own hands to help recruit some of the league?s biggest stars to their cities.

And no one has done it quite like Los Angeles Lakers season-ticket holder Jacob Emrani, a personal injury attorney who reportedly paid for over 40 billboards around LA focused on two of the most-coveted potential free agents to play at the Staples Center in 2018-19: Paul George and LeBron James.

According to ESPN?s Ohm Youngmisuk, there are six different designs of billboards, all of which include the hashtag ?#PG2LA.?

Huge props to Mr. Emrani for making this happen around the Los Angeles area.

Attorney and Lakers season ticket holder Jacob Emrani, who put up 4 billboards recruiting LeBron in March, has paid for over 40 billboards for Paul George. There are six different designs, all have the #PG2LA with three designs including LeBron with George. Here’s one billboard: pic.twitter.com/xHoHaItlqC

Now it?s time to rank the billboard?s phrases ? from worst to best ? based on creativity and accuracy:

This one is just too out there to be anywhere else on the list. What time has really come? The time for Paul George to actually be a Laker unlike last offseason, when he might have actually wanted to be there but got traded from the Indiana Pacers to the Oklahoma City Thunder instead? If so, that is something to potentially buy into, but let?s not pretend like the Lakers are just this struggling franchise desperate for a star to bring it a long-awaited championship. They have the most titles of anyone in the NBA in the 2000s. Think about that.

Let?s give credit where credit is due. This is quick, to the point, and it rhymes. A great use of social media lingo and nicknames, too. About that ring part, though. It just seems like a stretch. Make no mistake about it, LeBron James is absolutely more than capable of leading a team to the promise land, and Paul George would be a great complementary piece, but there just so happens to be a team up the state in Oakland (Golden State Warriors) and Houston (Rockets) built to make sure that doesn?t ever happen.

Having two of the game?s best players on a billboard with new jerseys in one of the world?s most popular cities. Every Lakers fan gets it. This is a simple and clean concept to get behind.

Oh, the shade with this one is so beautiful. Any jab at the mess with the Philadelphia 76ers and former general manager Bryan Colangelo and his multiple Twitter accounts deserves some kudos. It?s trendy and rather hilarious to everyone not a Sixers fan. There is a slight problem here, however. Are we 100 percent sure there isn?t a player or coach with a burner account? After all, this is Los Angeles, 2017 No. 2 draft pick Lonzo Ball has a diss track about Kyle Kuzma, and there is no true guarantee someone isn?t disguised solely due to the youth of this squad.

In a world that sometimes cares about opinions more than facts, the accuracy of this is very much appreciated. It might be a little cheesy, sure, but it makes sense and is catchy enough to make a splash across the city. It ties one of the main targets to the team in a creative way, and there is no reason to really knock this at all unless you are just in a bad mood.

Is this the most creative phrase? No. Is it the funniest billboard? Absolutely not. But who really needs to be creative and funny every single time they make a point? This is perfect. It?s a simple, direct phrase, urging George, the Palmdale, Calif., native and Fresno State alum, to come home and play for his hometown.

At the end of the day, it is not a foregone conclusion that George, James, or even disgruntled Spurs forward Kawhi Leonard ends up playing for the Lakers next season. That?s up to Magic Johnson and the front office to work up an opportunity to get one, two, or all three of these All-Stars when free agency hits at 9 p.m. PT on Saturday night.

For now, the basketball world has these billboards in California, and sometimes it?s the little (or big) thing like this that make NBA free agency unlike anything else in sports.