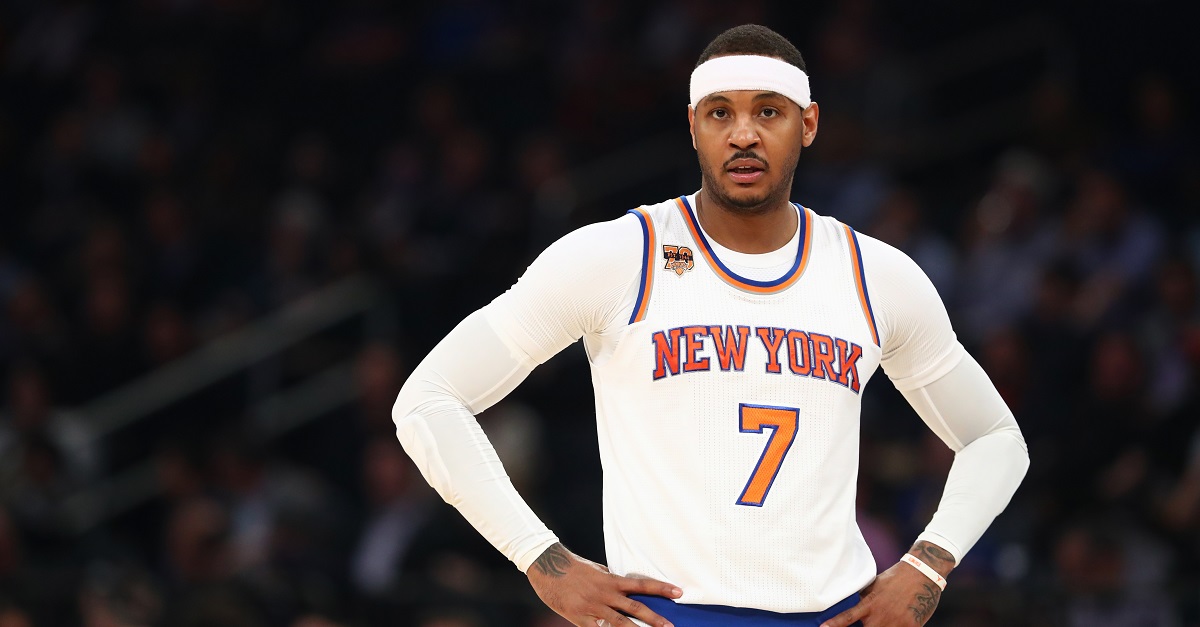 Al Bello/Getty Images
NEW YORK, NY - FEBRUARY 27: Carmelo Anthony #7 of the New York Knicks looks on against the Toronto Raptors during their game at Madison Square Garden on February 27, 2017 in New York City. NOTE TO USER: User expressly acknowledges and agrees that, by downloading and/or using this Photograph, user is consenting to the terms and conditions of the Getty Images License Agreement. (Photo by Al Bello/Getty Images)

The Houston Rockets are in pursuit of 10-time All-Star Carmelo Anthony, but there have been some holdups on the trade with the New York Knicks.

The Knicks are hesitant to take by Ryan Anderson since he is owed over $60 million during the next three seasons, so the Rockets will need to get at least one or two more teams involved to make the trade work.

Related: There?s reportedly one player holding up the Carmelo Anthony trade, and it isn?t him

ESPN’s Brian Windhorst doesn’t believe the trade will happen, and he called a potential four-team trade a “pipe dream” during an appearance on “The Basketball Analogy Podcast.”

“A three team trade is a no-team trade. A four-team trade is a pipe dream,” Windhorst said. “Obviously they happen, so it?s not like a zero-percent chance. Basically, at the end of the day, Melo will waive his no-trade to go to the Rockets, he may even waive all or part of his trade bonus. He?s ready to go to Houston. Houston is ready to have him.

“Apparently any bad blood between him and (Houston head coach Mike) D?Antoni has been temporarily solved, dating from the Knick years. The Rockets want him and the Knicks want to trade him, but they can?t agree on a trade. They want to trade Ryan Anderson for him.”

Anderson’s contract will be tough to trade considering he is due $19.5 million next year, and that increases to over $20 million during the last two years of his deal.

The Rockets have better assets to trade than Anderson?namely center Clint Capela and small forward Trevor Ariza?and both are on team-friendly contracts. But the team is unlikely to part ways with either because they value both and think they need both to compete for a championship.

If the two sides can’t agree to a deal, the Rockets can wait for the Knicks to buyout Anthony’s contract, which would likely happen if they can’t trade him. The main concern with waiting for a buyout is that Anthony could choose to join the Cleveland Cavaliers instead.

If Houston can find someone to take on Anderson’s contract, then the two sides can likely work out a deal. Otherwise, they will have to play the waiting game for Anthony.