The 2022 American Century Championship golf tournament in Lake Tahoe was a spectacle, to say the least. Tony Romo raised the cup, Travis Kelce bonged a beer with the crowd mid-round, and all the other tweet-worthy celebrity shenanigans made the event one to remember. But the most memorable moment from the weekend came from NBA legend, turned TNT commentator, Charles Barkley, who went viral for doing what Chuck does best -- speaking his uncensored mind.

"I want to say this," he shouted. "If you're gay or transgender, I love you." He paused for the uproarious crowd, before continuing: "Hey, and if anybody gives you shit, you tell them Charles said '**** you!'"

If that statement from Chuck surprised you, then you're about to be given a history lesson in the Round Mound of Rebound's legacy of fighting discrimination.

The Round Mound of Allyship 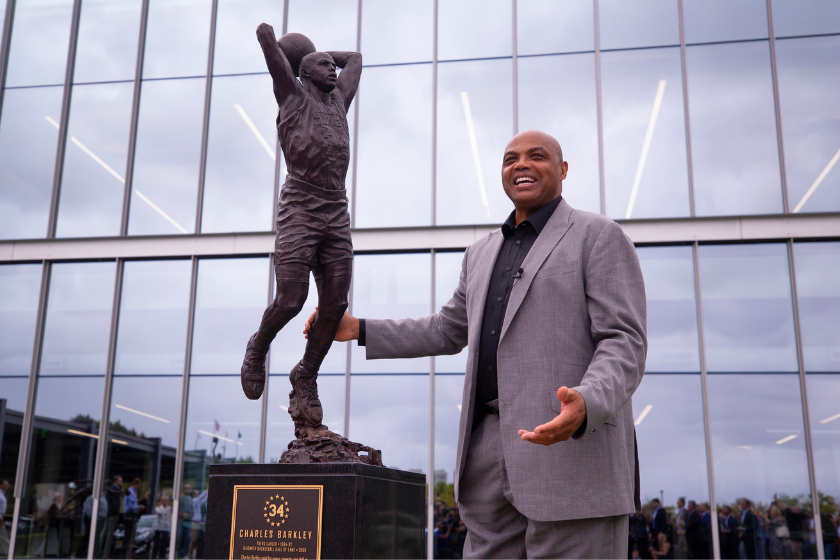 It's not lost on me that the attention Chuck garnered was thanks to a viral TikTok video (he famously hates social media) taken of Charles loudly reaffirming his love and support for the LGBTQ+ community. The 11-time NBA All-Star had no problem reminding hateful bigots what they can do.

Charles Barkley has become sports' unlikely all-star ally for the LGBTQ+ community, with a long history of speaking out against discrimination.

The same week Chuck sent socials into a frenzy, 10 anti-LGBTQ laws went into effect, all targeting schools. The Trevor Project revealed, "LGBTQ youth who found their school to be LGBTQ-affirming reported lower rates of attempting suicide." Hate crimes continue to rise across the United States, especially for transgender youth, and suicide continues to be on the minds of our LGBTQ+ youth at alarming rates.

According to The Trevor Project's 2022 National Survey on LGBTQ Youth, lesbian, gay, bi and transgender teens are at increased risk of suicide. The LGBTQ youth's mental health study revealed startling statistics: 45% of LGBTQ teens (ages 13-17) seriously considered attempting suicide in the past year. And 18% actually made a suicide attempt. The average rate, among all U.S. teens, is around 9%, putting LGBTQ+ youth at double the risk. Even more devastating, The Trevor Project estimates that of the more than 1.8 million LGBTQ youth (ages 13-24) contemplating suicide every year, every 45 seconds, a young person person attempts to take their life. Every 45 seconds. In the amount of time it took you to read this short paragraph, a struggling young person tried to end their life.

The Trevor Project stated that "LGBTQ youth are not inherently prone to suicide risk because of their sexual orientation or gender identity, but rather placed at higher risk because of how they are mistreated and stigmatized in society."

These studies and their startling statistics are why Charles Barkley speaking out matters. It's why his repeated support for the LGBTQ+ community makes a difference. It's why TikTok, Instagram and Twitter were losing their minds. Chuck continually uses his fame and privilege for good, and the sports community -- heck, the world -- needs more Chucks.

A Long History of Standing Up Against Bullies 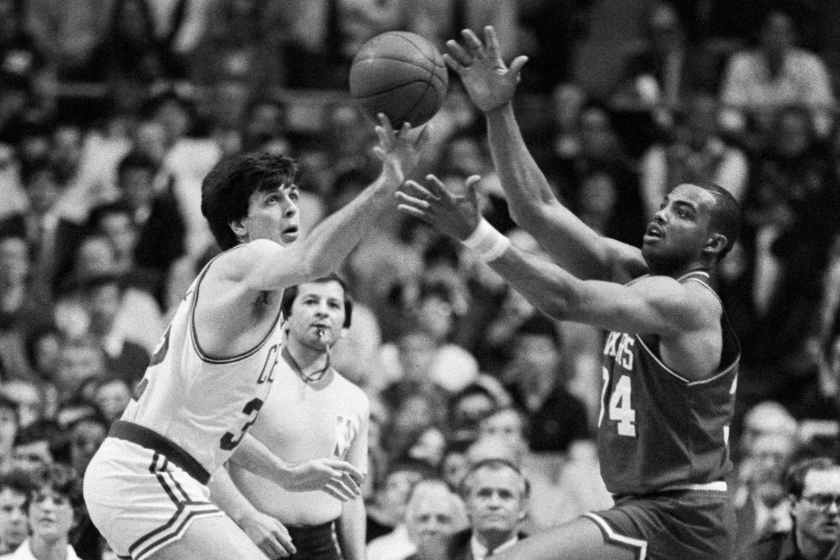 RELATED: The 10 Best "Inside the NBA" Moments From This Season, Ranked By Hilarity

You may remember back in 2017, Barkley empathically spoke out about North Carolina's House Bill 2, known as "the bathroom bill." This transphobic bill prevents trans people from using public facilities, such as restrooms, that align with their gender identity. Chuck made the bold choice to sit out the All-Star Game as long as it would be taking place in Charlotte because he vehemently opposed the bill. He didn't hesitate to use his privilege and influence to encourage the NBA to pull out of North Carolina. Hall of Famer Charles Barkley even went on CNN to speak out, "I'm supposed to stand up for the people who can't stand up for themselves so I think the NBA should move the All-Star game from Charlotte."

The most recent 2022 NBA All-Star Game took place in Cleveland. According to The Greater Cleveland Sports Commission, the economic impact on the region from the festivities was nothing to sneeze at. The event provided the region with $141.4 million in direct spending, with a total economic impact of $248.9 million. Money talks, so the impact of Barkley's voice and the NBA's decision to pull the All-Star weekend extravaganza from North Carolina because of its bigoted anti-LGBTQ+ laws, hit the state where it would feel it most, in its coffers.

In 2020, Charles was still being applauded for his actions back in 2017 which ultimately led to the game being moved to New Orleans. During his first appearance on "The Ellen Show," DeGeneres thanked Barkley for his advocacy for LGBTQ+ rights. "I hated the bathroom bill," he said. "So I went to my boss and said, 'Hey boss, I'm gonna sit out of the All-Star Game. I don't want to take away from the All-Star Game, but I'm gonna sit out." Despite being told he couldn't sit out the game due to his star power, Chuck doubled down and told the NBA, "I got to make a stand against discrimination." Following Barkley's protests, commissioner Adam Silver moved the game to Louisiana, sending a strong message to the LGBTQ+ community that the NBA had their backs. 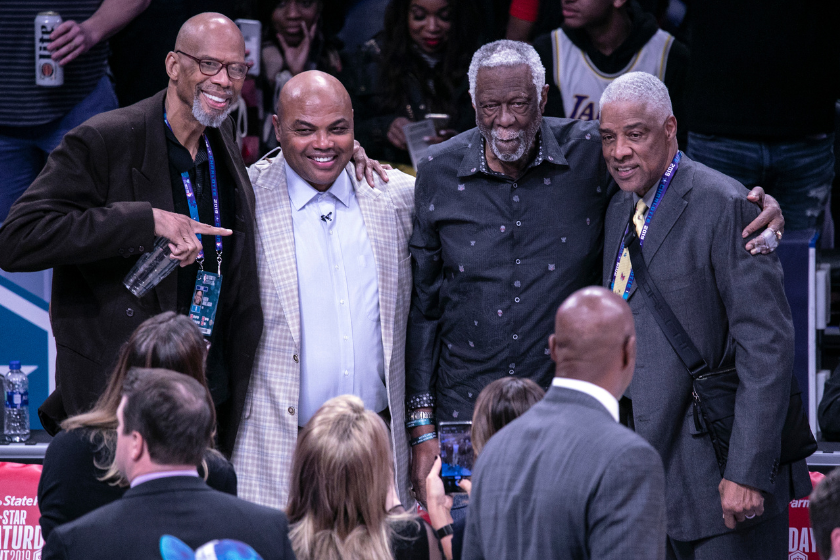 RELATED: Michael Sam and The Kiss that Changed the NFL

Chuck's allyship didn't start with the All-Star Game in 2017. Nope. Three years before the All-Star Weekend stand, Charles went on CNN with Wolf Blitzer to discuss his belief that gay couples should have equal rights. Michael Sam had become the NFL's first openly gay active player, and the media was eager for sound bites from the sports community. Barkley spoke passionately with Blitzer when asked why he needed to raise the issue of gay rights among athletes.

"Well, I think it's important as a black man to always be inclusive. I'm always against any form of discrimination. I learned that from Bill Russell, as a black player we always want to be inclusive. And we've all played with gay players. We should not be discriminating against anybody. And I think it's an insult to gay people to think that they're gonna be looking at their teammates in a sexual way. That's an insult to all gay men and we welcome them to the locker room, and I wish Mr. Sam the best. And I'm glad Attorney General [Eric] Holder announced same-sex benefits, because they deserve the same sex benefits as other men and women couples."

Charles was applauding Holder, who merely a week before Barkley's CNN interview, had given a historic speech at the Human Rights Campaign NY Gala. Barkley supported the Attorneys General's new policy memorandum, which would, as Holder said, "for the first time in history -- formally instruct all Justice Department employees to give lawful same-sex marriages full and equal recognition, to the greatest extent possible under the law."

Full and equal recognition sounds good to me, Chuck, and most Americans, actually. According to a poll conducted by the Public Religion Research Institute (PRRI), support for nondiscrimination protections is at an all-time high. The poll determined roughly 80% of Americans favor laws protecting LGBTQ+ people against discrimination in employment, public accommodations and housing. Despite the majority of Americans' support, the LGBTQ+ community is facing some of the toughest restrictions in history and SCOTUS (The Supreme Court of the United States) has said they want to revisit gay marriage.

If you're like me, you aren't afraid of some made-up LGBTQ+ "agenda" that bigots would like you to believe is wrapped up in a dangerous ulterior motive. I mean do all prejudiced nut jobs really believe all gay and trans individuals are just walking around trying to convert everyone. I have news for you, and it may be hard to hear, not everyone wants to sleep with you. I know, I know, how can that possibly be? I wonder sometimes whether the same people who believe men and women can't be alone together -- or friends at all for that matter -- without ripping each other's clothes off are the same people who believe every gay or trans person walking into the bathroom to poop, is actually lying about having to poop and just visits public bathrooms to bang strangers in a dirty stall.

Politicians confirm this theory. I mean, former Vice President Mike Pence won't take meetings with women unless there is a chaperone present. And in case you forgot, Mike Pence is responsible for some of the most heinous anti-LGBTQ+ legislation. It appears it's those fighting against equality for our LGBTQ+ brothers and sisters who are actually the real ones obsessed with sex -- and not their own sex lives -- but that of total strangers.

Barkley, a loud and proud ally, had something to say to those hypochondriac bigots worried about what might happen in locker rooms if (gasp) gay people were openly there.

"I think they're gonna be safe with their teammates. I think the public at large is more homophobic than guys in the locker room. I think we as players get a bad rap. If you go back and look at that Michael Sam interview, he told his team over the summer he never had an issue and none of those players outed him on Instagram or Twitter or all that other social crap. There was another college player who came out on his team and he said he was treated great. I think players gonna respect each other, and we should respect each other. When you're part of a team there are going to be agreements and disagreements but you should always have respect for each other."

The Chuckster May Joke on TNT, But Takes His Platform Seriously 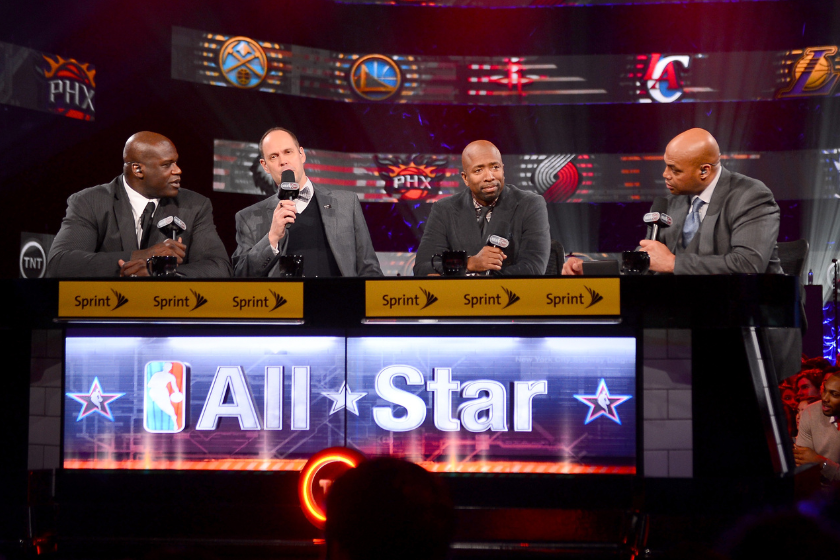 RELATED: Charles Barkley's Golf Swing is No Longer a Nightmare

Thank you Chuck, for using your platform to defend, support and educate. In a world where hate crimes continue to rise; and state legislators are trying to push people back into the closet, I applaud you. As progressive as the sports world can be at times, we still live in the hyper-masculine world of professional men's sports, where you can count on one hand the number of active pro players proudly out. Women's pro sports may appear more welcoming, but it's still a challenging and trip-wired time to be an out professional athlete.

Many may criticize Barkley for so brashly speaking out, and many have, but I'm still hopeful for future LGBTQ+ athletes. Charles Barkley spoke for the majority of us when he yelled, "If you're gay or transgender, I love you." I also believe he may have helped prevent suicides, and he definitely made someone watching him go off on TikTok feel less alone.

It matters how we use our voices, do we use them to tear others down and dehumanize them, or do we use them to stand up against discrimination and spread love? Do we choose inclusion or do we oppress and discriminate? We know what Chuck would do. Chuck would speak up, even if he's the only one speaking, and sometimes in the world of sports, I'm sure he feels like he is.

Oh and Chuck, in case you read this, I know you disagree, but you ARE a role model, especially to those young kiddos whose parents stopped loving, supporting and parenting them once they came out. So, thank you. Thank you for showing the youth that standing up against discrimination of any kind is cool and for reminding all of us that love is love.

If you're looking for ways to support LGBTQ+ youth or the community at large, here are some resources.

MORE: Glenn Burke, Tommy Lasorda and a Messy History of Silence from the Dodgers