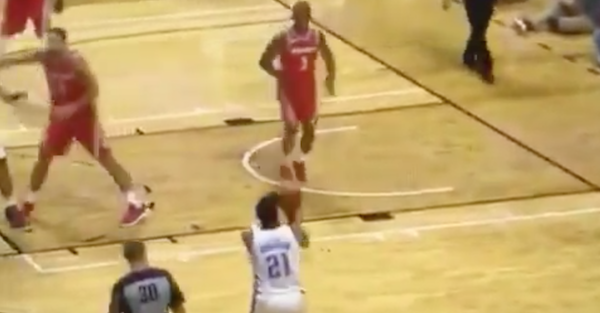 Andre Roberson can’t shoot. Chris Paul loves to talk trash. So imagine what happened when the two played against each other in a preseason game between the Oklahoma City Thunder and Houston Rockets.

Roberson was left wide open for a 3-pointer, but Paul didn’t run out to cover him. Instead, he yelled “hell nah” after Robertson airballed the shot.

This some A1 disrespect right here, CP3 leaves Roberson open on purpose, small-waves him as he lines up 3, screams “HELL NAH” after airball😭 pic.twitter.com/71c6862Og2

Roberson shot 24.5 percent from 3-point range last year, and it’s not a shot he shoots very often. He also shoots less than 50 percent from the free throw line for his career, and he’s been known to airball those, too.

The Thunder and the Rockets will likely have a rivalry on the court this season since they’ll both be competing for a chance to take down the Golden State Warriors this season. If CP3 talks that much trash in a preseason game, imagine what he’ll say in the regular season or playoffs.