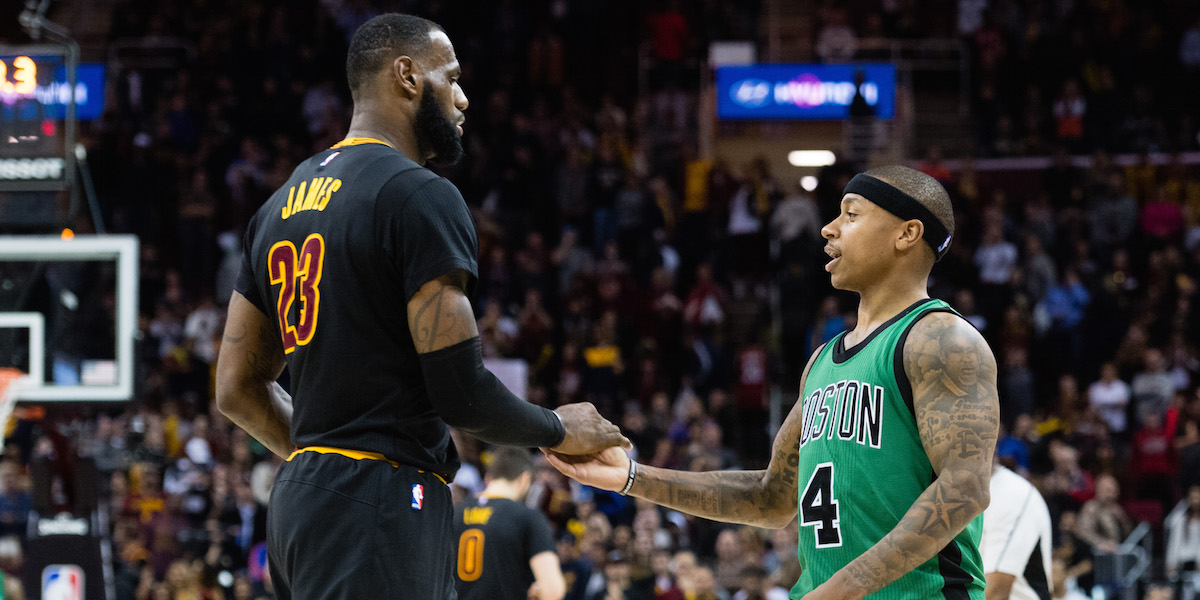 Jason Miller/Getty Images
CLEVELAND, OH - DECEMBER 29: LeBron James #23 of the Cleveland Cavaliers celebrates with Isaiah Thomas #4 of the Boston Celtics during the final seconds second half at Quicken Loans Arena on December 29, 2016 in Cleveland, Ohio. The Cavaliers defeated the Celtics 124-118. NOTE TO USER: User expressly acknowledges and agrees that, by downloading and/or using this photograph, user is consenting to the terms and conditions of the Getty Images License Agreement. Mandatory copyright notice. (Photo by Jason Miller/Getty Images)

Isaiah Thomas is officially a member of the Cleveland Cavaliers, but his debut may be delayed longer than most anticipated.

Thomas’ hip injury could force him to be out until the All-Star break, according to Jason Lloyd of The Athletic.

And here's @JasonLloydNBA on how important that Nets pick is to the Cavs, and some 👀 speculation on IT's hip: https://t.co/vwOYYj4iKW pic.twitter.com/lVCWw5EX79

Earlier this week, Thomas told ESPN that he is confident that he’ll be able to return from his labrum injury, which he believes will not have a long-term impact on his career.

If Thomas is unable to return sooner, that would mean more minutes for point guard Derrick Rose, who signed a veteran’s minimum deal this offseason. It could also cause some chemistry issues depending on when Thomas returns as the Cavs will likely be making their final playoff push at that point.