Where were you when LeBron James made his "decision" in 2010?

I was 16 and on my way to a friend's house to eagerly watch. Most of us were LeBron fans, but there were a few Kobe stans among us who were tuning in out of spite. (Side note: the LeBron/Kobe debate was frequent in our friend group. LeBron's Cavs falling to the Celtics in 2010 robbed us of settling it once and for all, thus giving the Kobe stans unlimited ammo).

He told the world he was taking his talents to South Beach and turned from beloved hometown star to the most hated athlete on the planet. Of course, his move to the Miami Heat teamed him up with Dwyane Wade and Chris Bosh, creating a seemingly unbeatable Big 3. It looked even worse when he promised not one, not two, not three, not four, not five, not six but seven championships at the introduction event. Meanwhile, we processed the shocking news by playing "Call of Duty: Modern Warfare 2".

The formation of LeBron, Wade and Bosh made Miami the unquestionable favorites to win the NBA championship in 2011. It looked inevitable, and most NBA fans wanted to see anyone but the Heat win the title. A superpower had been born in South Florida, but one man in North Texas wasn't phased. 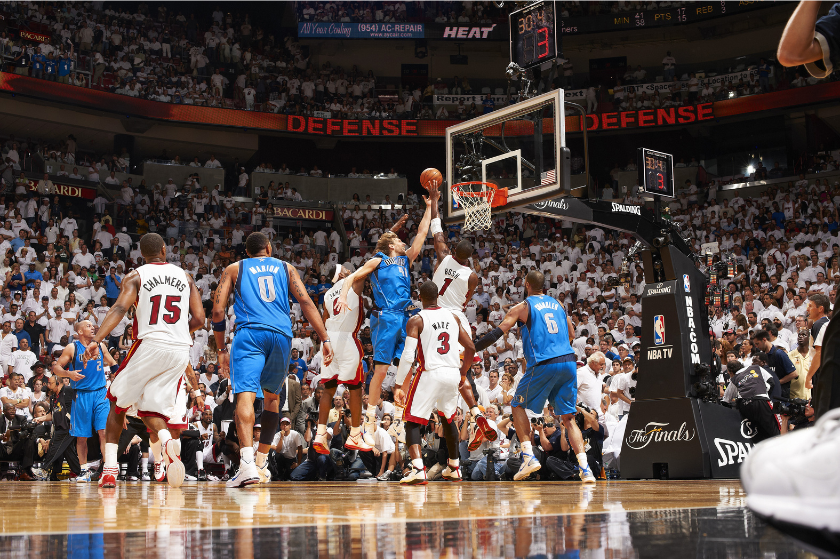 Dirk Nowitzki had fallen short on multiple occasions leading up to the 2011 NBA playoffs. The Mavericks fell to the eventual champion Spurs in 2003, then lost to the Heat in the 2006 NBA Finals after going up 2-0, and of course, there's the loss to the No. 8-seed Golden State Warriors in the first round of 2007.

So, Dirk and the Mavericks didn't have the best playoff reputation. But, 2011 was a different story. The Mavs had a veteran team led by Dirk, Jason Kidd, Jason Terry, Shawn Marion and Tyson Chandler. Dirk averaged 23 points and seven rebounds per game -- earning a spot on the All-NBA Second Team -- en route to a 57-25 record and the No. 3 seed in the West.

Their first-round date? The Portland Trail Blazers, without their injured star Brandon Roy, whose knees were reaching their breaking point. Dirk took his play up a notch by scoring 27.3 points per game as Dallas took the series 4-2.

Next up, the two-time defending champion Los Angeles Lakers. The Kobe Bryant, Pau Gasol, Lamar Odom, Metta World Peace and Derek Fisher core that had claimed the last two titles were gassed. Dirk and Co. took advantage by bringing out their broomsticks. Mavs win the series 4-0.

Dallas fans have told me they believed they could win it all after this series. One, they had just swept the two-time defending champs. Two, their main competition, the San Antonio Spurs, had been upset by the "Grit and Grind" Memphis Grizzlies in the first round. The young and fiery Oklahoma City Thunder then beat the Grizzlies in seven games in the Western Conference Semifinals.

The Mavericks were rested and experienced. The Thunder were young and fresh off a grueling series. Even though OKC had Kevin Durant, Russell Westbrook and James Harden, Dallas won in five games and Dirk put up over 40 points twice. This man was on a mission.

The Mavs were returning to the NBA Finals to face the team that had beat them in 2006. This time, the South Florida lads had all the firepower you could imagine: Prime LeBron, D-Wade and Bosh. But, the hatred the Heat had built up throughout the season made Dallas the fan favorites. Most everyone wanted them to win.

The backing of a majority of the basketball world, plus, revenge for 2006 turned Dirk Nowitzki into a mad man. 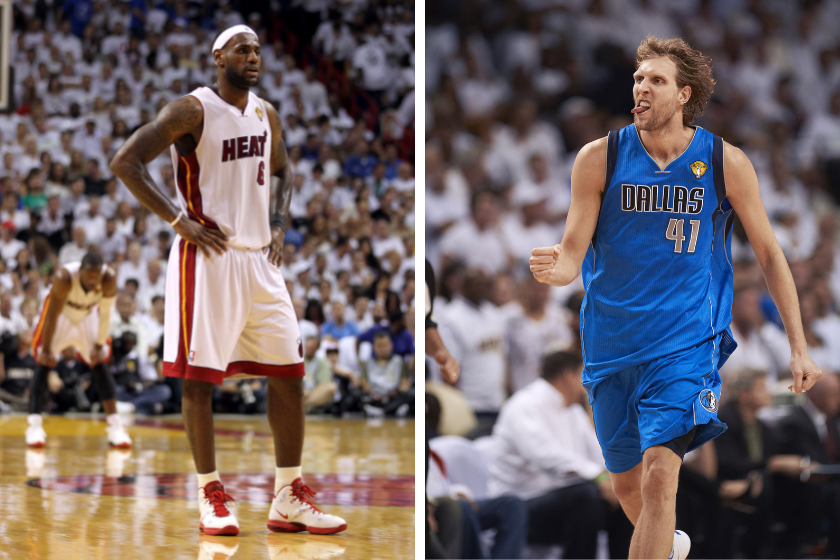 The world figured Miami would win and Vegas did, too. The Heat were -180 favorites heading into the NBA Finals while the Mavs were +160. I was in the majority who believed the Heat would win. I mean, LeBron, Wade and Bosh against Dirk and his supporting cast? The outcome seemed to be written in ink, like when the Golden State Warriors had Kevin Durant and won in 2017 and '18.

And we appeared to be on our way when the Heat won Game 1 by a score of 92-84 and Dirk tore a tendon in his left middle finger. Game 2 was a similar story with Dwyane Wade hitting a three-pointer to give the Heat a 15-point lead lwith 7:14 left in the fourth quarter. Wade's three turned out to be a bad omen. He posed in front of the Mavs' bench after the ball went through, giving Dallas all the motivation they needed. They proceeded to go on a 22-5 run to close out the game, and Nowitzki scored the team's final nine points. He capped the comeback with a legendary game-winning layup.

Dallas evening up the series stunned the Heat. Weren't the Mavericks supposed to roll over and die? Nope, they came to play, and the Heat's arrogance got the best of them. However, they were able to bounce back and win Game 3 in Dallas by two behind Wade's 29 points and 11 rebounds despite Dallas coming back again. This time, from a 14-point deficit.

Game 4 is Skip Bayless' favorite game of all time. Yes, the infamous game where LeBron scored eight points on 3-of-11 shooting. Even with LeBron giving the worst performance of his career, the Heat kept it close and took a nine-point lead early in the fourth quarter. But, Jason Terry came up big by scoring four straight points and hitting the go-ahead layup with just over five minutes remaining in the game. He then hit two free throws to extend the lead to 86-83 and Wade's inability to handle the inbounds pass prevented the Heat from getting a clean look. Dallas took Game 4 and evened up the series again.

In Game 5, Nowitzki scored 29 points on an efficient 9 for 18 from the field and a perfect 10 for 10 from the free-throw line. But, the Mavs don't win this game without Jason Terry. The shooting guard scored 21 points while going 3 for 5 from downtown. His most notable contribution was scoring or assisting on 11 points of the 15-3 run that gave Dallas the lead for good. He also assisted on the Nowitzki's baseline slam. You know Dirk is feeling it when he dunks. Dallas wins 112-103 and takes the 3-2 series lead.

LeBron had a strong first half in Game 6 with 11 points, but Dallas head coach Rick Carlisle's decision to switch to a zone completely threw off Miami's rhythm. Dallas thwarted a 14-0 Miami run and took a nine-point lead in the fourth quarter. They never looked back. Dirk dropped 21 points while Terry poured in 27 off the bench. LeBron finished with 21, but didn't record his first second-half bucket until the end of the third quarter. Wade and Bosh scored 17 and 19, respectively. Dallas 105, Miami 95. The Mavs win the series 4-2.

The Mavericks' victory not only elated fans because it deprived the Heat of a title, but it also gave us as great a sports moment. Immediately after the final buzzer went off, Dirk went to the locker room in tears to process what he and his team had just accomplished. He returned for the presentation of the Larry O'Brien Trophy and was deservedly named NBA Finals MVP.

How can you not be romantic about basketball?

How the Mavericks Beat the Heat 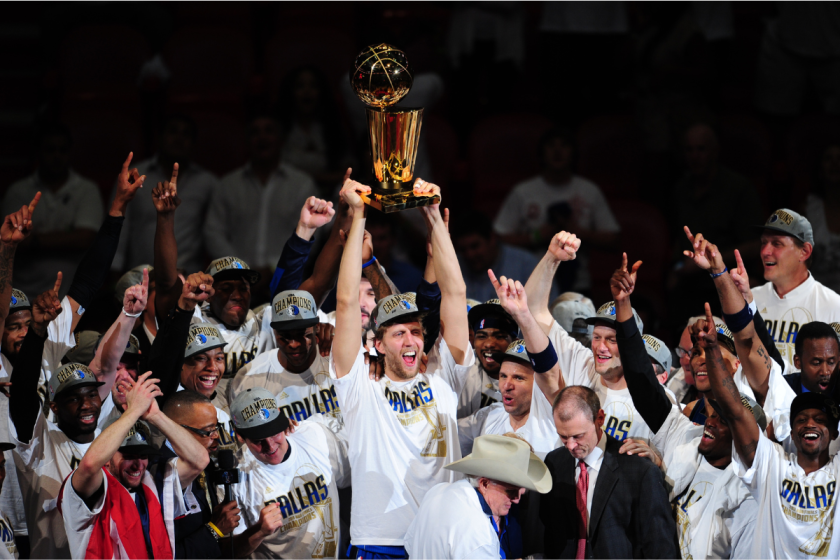 It's hard to decipher how the Heat lost when comparing rosters with the Mavericks. The Heat had three of the league's best players in their prime and they weren't able to beat a seasoned Mavs squad. How?

Well, there are a couple of reasons. The Heat's arrogance got in their way. They figured their talent was enough to walk all over the Mavs and didn't take them seriously. On top of it all, Dwyane Wade's pose in Game 2 lit a fire under the Mavs. Had it been any other player, it probably wouldn't have been as big of a deal, but Wade? The guy who broke Dallas' heart in 2006? Yeah, that'll get the engines revving. Remember when Wade and LeBron also mocked Dirk's illness heading into Game 5?

And, of course, the Mavericks wouldn't have won without Dirk. He went on a tear those playoffs and came through in the clutch multiple times. Just take a look at the highlights.

The 14-time NBA All-Star averaged 27.7 throughout the postseason, upping his regular-season average by nearly five points. But, what separated Dirk was he was fine with taking a back seat -- like when Jason Terry shouldered the offensive load in Games 5 and 6. All that mattered to Dirk was winning, it didn't matter if he was the one leading the charge.

Also, the Mavs had 18 to 1 odds to win it all going into the playoffs. I dare anyone to prove they chose them. Sweeping the two-time defending champs in the Lakers, beating an uber-talented Oklahoma City Thunder team and defeating the juggernaut Miami Heat is incredible and improbable. Yet, the Mavericks did it, and that's why I consider it the greatest playoff run in NBA history.

MORE: NBA Superteams That Chased A Championship Ring -- For Better Or Worse