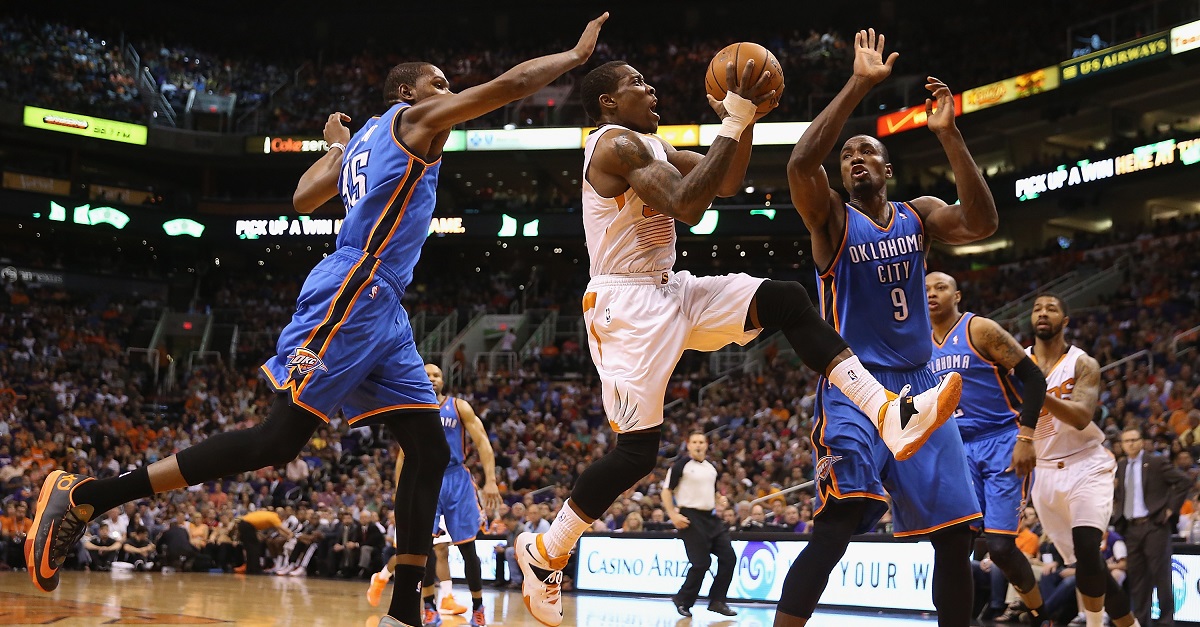 Christian Petersen/Getty Images
PHOENIX, AZ - APRIL 06: Eric Bledsoe #2 of the Phoenix Suns drives to the basket past Kevin Durant #35 and Serge Ibaka #9 of the Oklahoma City Thunder during the second half of the NBA game at US Airways Center on April 6, 2014 in Phoenix, Arizona. The Suns defeated the Thunder 122-115. NOTE TO USER: User expressly acknowledges and agrees that, by downloading and or using this photograph, User is consenting to the terms and conditions of the Getty Images License Agreement. (Photo by Christian Petersen/Getty Images)

The Phoenix Suns are off to a miserable 0-3 start, including two losses by over 40 points. Now, the highest paid player on the team said he doesn’t want to be with the team anymore.

I Dont wanna be here

RELATED: Earl Watson has reportedly been fired from the Suns

Maybe Bledsoe was at his in-laws or something and that’s where he doesn’t want to be, but it sure seems like he wants to be traded away from Phoenix.

Not sure exactly where this ranks among the 100 best NBA tweets ever but feels like top 20 easy https://t.co/FyrQHLS28E

Bledsoe was a first round pick in the 2010 NBA Draft out of Kentucky, and he played the first three years of his career with the Los Angeles Clippers. He’s averaging 15.7 points per game this season for the Suns and 13.1 ppg for his career.

Bledsoe is the highest paid player on the Suns’ roster, but he’s only making $14.5 million this year and $15 million next year. He has a tradable contract, and the Suns could look to move him soon. Bledsoe has had injury issues in the past, so it’s unclear what the market would be for him.