Second-round NBA Draft picks are guys teams take fliers on, guys who are most likely to float in between the G-League and the end of benches. According to the Sports Analytics Group at the University of California-Berkley in 2019, only 20-percent of active NBA players were selected in the second round. That's why hitting on a second-rounder is like winning the lottery.

Take Nikola Jokic for example. The Denver Nuggets superstar was a second-rounder who went on to become NBA MVP. The Golden State Warriors struck gold in 2012 when they selected Draymond Green out of Michigan State with the 35th overall pick. Green has been the anchor of Golden State's defense going on a decade now, and we saw how fragile they were this year without him on the floor.

The New Orleans Pelicans found their diamond in the rough in Herbert Jones. The University of Alabama product, like Green, was the 35th overall pick in the 2021 NBA Draft. He's blown expectations out of the water during his rookie season for his pesky defensive abilities, becoming an NBA media darling in the process.

Who could've seen this coming? 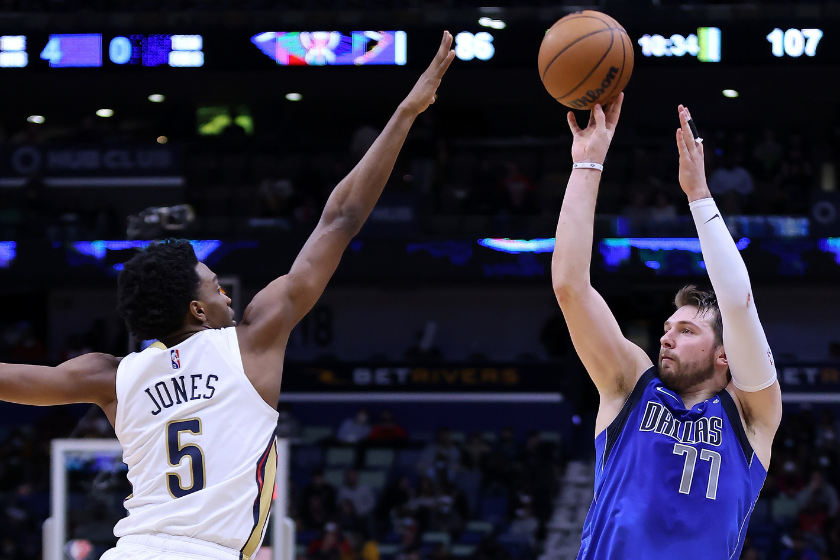 Jones, a 6-foot-7, 206-pound small forward with a 7-foot wingspan, was a rarity among NBA prospects. The Greensboro, Alabama was a four-year guy in college who fully came into his own as a senior. To no surprise, Jones was the anchor of Nate Oat's defense, but he also scored a respectable 11.2 points per game. He took home the SEC Player of the Year award and the SEC Defensive Player of the Year award while leading the Crimson Tide to its first SEC Championship in 30 years.

Jones brought the same defensive mentality he had in Tuscaloosa to the NBA. In fact, "Not on Herb" began circulating the Pelicans' facilities when Jones began clamping down individual matchups in training camp. It also became the primary reason he began to see minutes early on in his rookie campaign.

Since, Jones has been tasked with handling All-Stars such as LeBron James, Devin Booker, Paul George, Luka Doncic, Donovan Mitchell and Trae Young. Each has given Jones credit for making life tough on them.

Here's what Mitchell said after the Pels and Utah Jazz matchup on January 3, per Desert News:

"I think he's gonna be in this league for a long time," Mitchell said of Jones. "I've got to give him his props. He's made it tough on me every night we've played them. He's a guy that doesn't talk much and doesn't say much, but he goes out there and competes. Tonight he was 4-of-8 for 11 points, but defensively he's tough."

"I think he's been phenomenal," Conley said. "For a young guy to come in and take the challenge of guarding guys like Donovan [Mitchell] and some of the best players in the league, the way he moves his body, the way he's able to do the things he does. Obviously he's a natural defender but it seems like he really watches film and really studies the game. It's been fun to compete against him ... he's been a bright spot for that team."

To have some of the game's best players shoutout a rookie speaks volumes about Jones' impact. His highlights show it.

The dude is everywhere -- similar to a ball-hawk safety. He's disrupting passing lanes, in offensive player's grills, affecting their shots, grabbing steals, forcing them away from their spots. It's been a beauty to watch for hoopheads everywhere, and I have yet to find an NBA media member who isn't head over heels for him.

ESPN's Zach Lowe and Kevin Arnovitz gushed over Jones on a recent episode of The Lowe Post podcast.

"I love Herbert Jones," Arnovitz said. "He's going to be on my first-team All-Rookie (vote), as a second-round pick. I'm a big fan of Herbert Jones. He was even a late scratch for my second-team (NBA) All-Defense. I'm enjoying the Herbert Jones experience."

The Ringer's Bill Simmons is also a big fan of Jones, but caught flack for his comments about Houston Rockets rookie Jalen Green -- saying that even though Green was the second-leading rookie scorer, he plays for a bad team and Jones deserves a spot on the NBA All-Rookie First-Team ahead of him.

"F--k Jalen Green," Simmons said in a recent episode of The Bill Simmons Podcast. "I don't care you're scoring 40 points and your team's 19-60. Congratulations. Herb Jones is like guarding dudes in real games."

Hebert Jones isn't the kind of guy whose impact will show up on a stat sheet. Word of mouth on a defensive player is more telling, and seeing how his peers, teammates like C.J. McCollum, Jonas Valanciunas, Brandon Ingram and Larry Nance Jr., as well as media members, speak about him, he's going to make life hard for offensive players for a long time.

MORE: Alabama's All-Time Starting 5 Could Beat Anyone at Any Time