Rooting for the Boston Celtics over the past few years has been an incredibly up-and-down experience. They've gone from scrappy overachievers to the most disappointing franchise in the league, to legitimate title contenders, all since 2017.

For most of the past decade, Brad Stevens was the Celtics' head coach. After the departure of Kevin Garnett, Paul Pierce to the Brooklyn Nets and Ray Allen to the Miami Heat, Stevens and then-General Manager Danny Ainge presided over a rebuild.

Miraculously, the team only missed the playoffs for one season, thanks in part to an overlooked 2015 trade deadline deal where Boston acquired diminutive point guard Isaiah Thomas from the Phoenix Suns. "The Little Guy," as the late great Celtics announcer Tommy Heinsohn called him, became a fan favorite and a leader of the C's for the next few seasons, bringing them all the way to an unlikely 1-seed and the Eastern Conference Finals in the 2016-2017 season.

The Trades and Signings That Doomed the Celtics 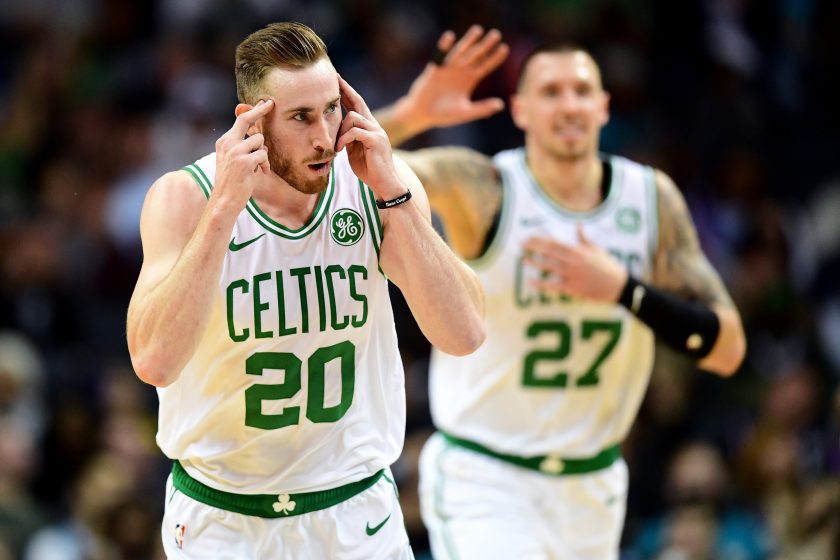 From there, things took a turn for the weird. In a shocking move no one saw coming, Boston traded Thomas for Kyrie Irving. In a predictable move everyone saw coming, they signed Gordon Hayward. Paired with Al Horford, Marcus Smart, young Jaylen Brown and rookie Jayson Tatum, many expected this team to compete for a title. Then Hayward broke his ankle on the first night of the season and Irving injured his knee late in the year. Role players stepped up and the young guys played exceptionally well in the playoffs, getting Boston to Game 7 of the 2018 Eastern Conference Finals, where LeBron and the Cavaliers put an end to the Cinderella run.

If 2015-2018 was good vibes only, 2019-2020 was the opposite of that. Hayward never really worked out for the rest of his tenure in Boston, failing to fully come back from injury for more than a few weeks at a time. The team underperformed for basically three straight seasons. Chemistry and effort seemed to improve slightly when Irving left, and the Celtics did reach the Eastern Conference Finals once again in the bubble playoffs of 2020 but fell to the Heat when Hayward went down with yet another injury.

Last season was the nadir of the Brad Stevens tenure, and like most Celtics fans, I'd rather not think about it! No ball movement, lethargic play, uneven defense. Injuries and COVID did not help matters, but it was no surprise when Boston was bounced by the Nets in Round 1 of the playoffs.

Why Ime Udoka Was the Perfect Head Coaching Candidate 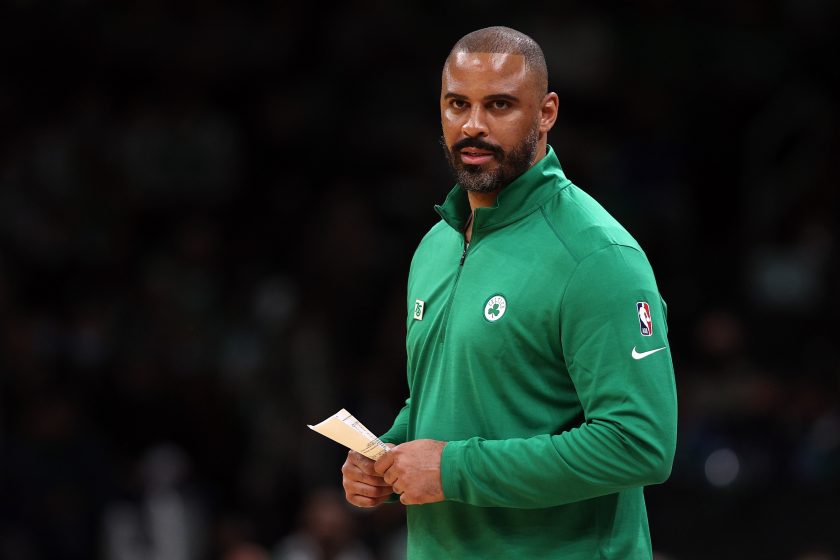 Last summer, Stevens stepped down as Celtics head coach, transitioning to a role in the front office. Celtics fans immediately began speculating about who should replace Stevens. Many clamored for a former player. Others insisted it should be a guy with NBA coaching experience. For once, the fans and the front office were on the same page, as the team hired former NBA player and former San Antonio Spurs, Philadelphia 76ers, and Brooklyn assistant coach, Ime Udoka.

Udoka also served as an assistant on the 2019 USA Basketball World Cup team featuring Jaylen Brown, Jayson Tatum and Marcus Smart. He knew the league and knew Boston's players. Would he know how to communicate with them?

Head Coach Ime Udoka, for his part, did not take this lying down, as one would expect of a Gregg Popovich apprentice. He was unafraid to call out his players in public for lackluster effort, potentially on the defensive side of the ball. Still, most Celtics fans were not exactly 100 percent confident that this would make much of a difference. Some alarmists in the media suggested the team blow it up, splitting up the Jaylen Brown and Jayson Tatum tandem. (To be clear, this Celtics fan never went that far.) The team lacked an identity. 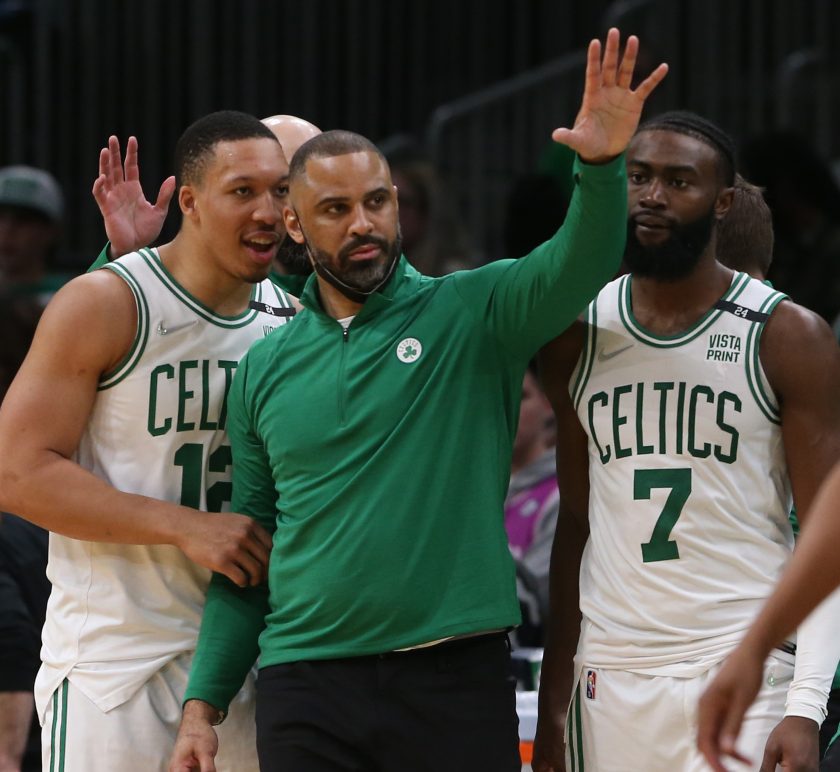 As reported by Jason Quick in The Athletic, things began to take a turn in late December. After a particularly lackluster defensive stretch, which included a spectacular fourth quarter collapse against the New York Knicks, Udoka utilized a film session to call out each player's inadequacies. It's part of a culture Udoka has spoken about publicly -- the importance of accountability from all parties. By all accounts, things started to turn after that session. As the calendar flipped to January, Boston's defense began to hum.

A great example of the Celtics connectedness on defense. The switching and rotations look effortless. pic.twitter.com/PIa1cIrV9s

Udoka's scheme is definitely more complicated than that, and smarter basketball minds could explain it further, but basically you need guys to be able to guard every position on the court.

In theory, switching everything makes it difficult for an offense to run efficiently. Offenses utilize picks and screens to get guys open or to utilize matchups. If a defense can switch every screen effectively and have five guys on defense who can guard -- or help guard -- all five guys on offense, the offense has a harder time finding a weak spot. In practice, this style of defense takes a lot of discipline and communication -- two things the Celtics seemed to be missing for the first third of the season.

Offensively, Udoka talks a lot about the importance of ball movement. Tatum is one of the most talented scorers in the NBA. But for large stretches of this season, he seemed content to play one-on-one, holding the ball until late in the shot clock before firing off a contested jumper.

By the middle of January, everything for Boston began to look different. Did it hurt that they were playing a pretty weak schedule against a lot of teams missing guys out with COVID? It did not. But the team was starting to show up with consistent defensive energy every night. On the offensive side, the ball zipped around the perimeter, finding role players for wide open threes. As teams began to double team Tatum, Tatum has grown adept at passing out of coverage, exploiting this imbalance to find open teammates.

Including their first-round sweep of the Nets and through the first three games of their series against Giannis Antetokounmpo and the Milwaukee Bucks in the second round of the NBA Playoffs, the Celtics are 37-12 since January 10. A complete turnaround from the listless, .500 basketball that marked the first few months of the season.

The Celtics have established an identity: hard-nosed, relentless defense and selfless offense. It is a direct reflection of Ime Udoka, who has proven to be just the voice the Celtics needed to hear.

MORE: Ja Morant's Dad Has Always Kept His Son Humble From the Backyard to NBA Playoffs