After troubling Isaiah Thomas physical, here’s what the Cavs will reportedly ask for next 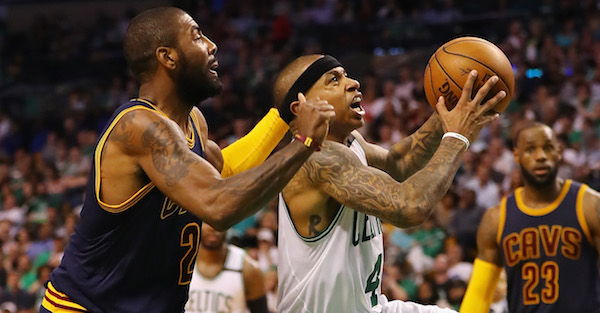 Koby Altman has a brand new job, serving as the general manager of the Cleveland Cavaliers.

And how did he try to make a splash? By seeking a career-defining transaction when the Cavaliers agreed to ship star point guard Kyrie Irving to the Boston Celtics for another star point guard, Isaiah Thomas, Jae Crowder, Ante Zizic, and the Brooklyn Nets’ 2018 first-round draft pick.

However, after a troubling physical, Cleveland is worried Thomas will miss a sizable chunk of time.

Now, with a deadline to complete the deal set for Wednesday, it appears Altman will try to squeeze a few more assets out of Boston ? assets highly coveted by Danny Ainge and his staff.

On Sunday, ESPN’s Adrian Wojnarowski reported the Cavaliers will ask the Celtics to include second-year guard/forward Jaylen Brown and rookie forward Jayson Tatum.

“Now, Cleveland is going to try to inquire about a couple of the Celtics’ young players, Jaylen Brown, Jayson Tatum, who they tried to get in the original trade, that is very unlikely,” Wojnarowski said. “But Boston still has a war chest of future first-round picks of their own, and some picks they control from other teams, and Cleveland is going to try to get one more of those to finalize this deal.”

As Wojnarowski said, it’s extremely unlikely Boston will part with either Brown or Tatum ? let alone both of them. One of the reasons Crowder was included in the original deal was to free up minutes for both players.

Per @ChrisMannixYS on @CSNNE, #Celtics will draw line in sand. May part with a 2nd Rd pick to complete #Cavs deal. No firsts/Brown/Tatum.

For the Celtics to give away Brown and Tatum would be defeating the purpose of the trade on their end.

They’re hoping a nucleus of Irving, Brown, Tatum, Gordon Hayward, Marcus Morris, and Al Horford will be enough to not only win one championship but multiple titles.

So, if the Cavs are hell-bent on getting one or both of Boston’s young wings, it would appear this mega deal is going to be kicked back.