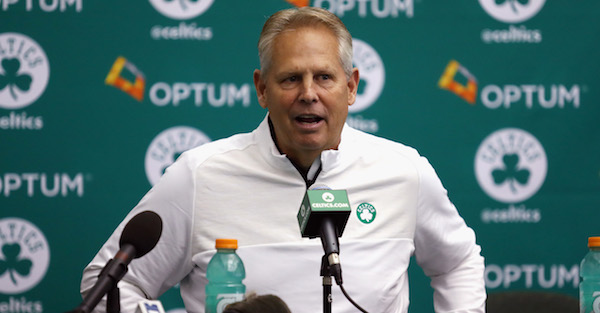 The Boston Celtics got “their guy” with the No. 3 overall pick in the 2017 NBA Draft. Celtics GM Danny Ainge now-famously traded out of the No. 1 overall spot to stockpile future assets and, in the end, Boston added Duke forward Jayson Tatum to the mix with their ever-growing list of young players.

However, Ainge was trying to keep tabs on another draft hopeful, Kansas forward Josh Jackson, in advance of the draft and he was simply unable to do so. In fact, Chris Forsberg of ESPN brings word that Jackson cancelled a workout with Boston while the Celtics were flying to see him. Ainge took it from there:

“Never talked with Josh. No one in our organization did. They cancelled a workout on us when we flew out to Sacramento, and they just decided to cancel it as we flew — just [coach] Brad [Stevens] and I and [assistant general manager] Mike Zarren flew cross-country.

“So there was something that he didn’t want to play for the Celtics. In spite of that, we’ve watched Josh for two years and we’re fans. He’s a terrific kid and a good player. So we tried not to overreact to those kinds of things and make a big deal of it.”

While Ainge took a reasonable tact, he later admitted to being “mad” and scuffled about a 4 am wake-up call the next morning after the failed trip to visit with Jackson.

This wouldn’t be the first time that a draft pick seemingly wanted to avoid going to a specific franchise but it is noteworthy in that Boston is well-run and successful on the floor. Ainge certainly has a gripe but, in the end, Jackson got his wish to avoid Boston and the Celtics picked up a valuable prospect for their trouble.