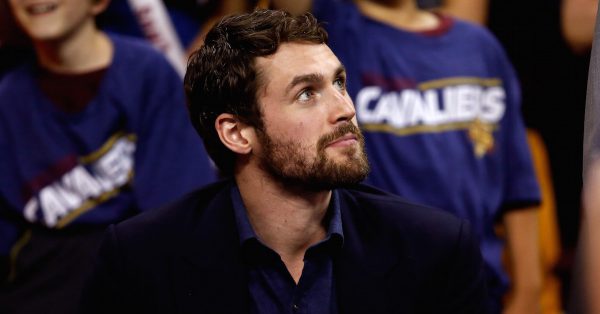 Gregory Shamus/Getty Images
CLEVELAND, OH - MAY 26: Kevin Love #0 of the Cleveland Cavaliers looks on late in the game against the Atlanta Hawks during Game Four of the Eastern Conference Finals of the 2015 NBA Playoffs at Quicken Loans Arena on May 26, 2015 in Cleveland, Ohio. NOTE TO USER: User expressly acknowledges and agrees that, by downloading and or using this Photograph, user is consenting to the terms and conditions of the Getty Images License Agreement. (Photo by Gregory Shamus/Getty Images)

The Cleveland Cavaliers have been the class of the Eastern Conference since the moment LeBron James returned to his home state for a second tour of duty. However, there is full-fledged turmoil taking place with the Cavs after word broke that Kyrie Irving is seeking a trade from Cleveland and even has a list of four destinations that he would prefer to land in down the line.

While that is a massive story in and of itself, the attention paid to LeBron James and buzz he will be leaving Cleveland next summer is palpable. Even the “forgotten” member of Cleveland’s big three, Kevin Love, seemingly wanted to make his own feelings known on Friday and he certainly did so on Twitter.

Life is amazing. No complaints. Things are a little peculiar. But no complaints. Now go kick some rocks 🙌🏼 https://t.co/Tz62YyGeYt

The use of “peculiar” is apparently in direct reference to an interview from Irving earlier in the week in which he described the situation in Cleveland with that adjective. Of course, it is highly amusing that Love told the entire internet (through the prism of Inside Hoops) to “kick some rocks” and Love happens to be locked up for a long while on a massive contract, providing some safety in that way.

There is plenty to speculate about with the Cleveland Cavaliers but Kevin Love isn’t complaining about his “amazing” life, even as he takes shots to the Twittersphere.