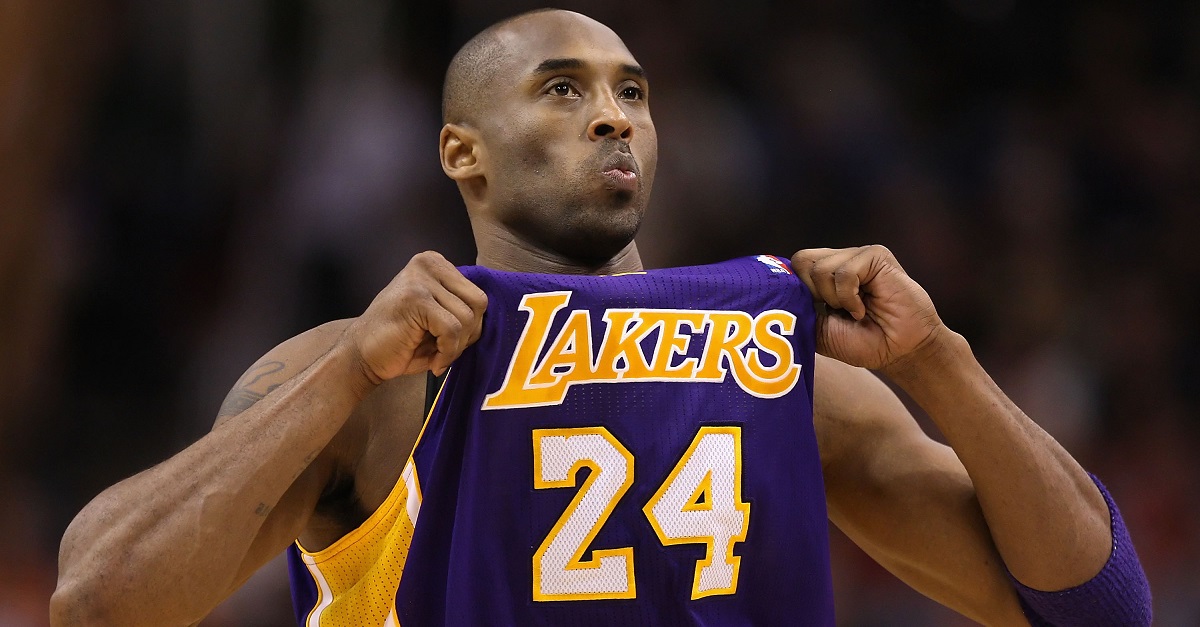 According to multiple reports, including TMZ Sports, ESPN, and Variety, Los Angeles Lakers legend Kobe Bryant was killed in a helicopter crash in Calabasas, California on Sunday morning. Bryant was 41 years old.

TMZ initially reported that at least three other people were inside the private helicopter when it went down. It was later found that nine people in total ? 8 passengers and the pilot ? were killed in the crash, as reported by the Los Angeles Times.

BREAKING: Kobe Bryant Has Died In A Helicopter Crash https://t.co/42oINV9ZUU

TMZ later confirmed that Gianna Maria Onore, Kobe’s daughter and rising basketball prodigy who dreamed of playing college basketball at UConn, was on board at the time of the crash, according to Kobe’s representatives.

ESPN’s Adrian Wojnarowski confirmed this, saying another player and parent were on board as the helicopter was traveling to the girls’ basketball game.

Los Angeles County Sheriff Alex Villanueva said that next of kin for the other passengers were being notified before their identities were made public. NJ.com reported that three of the victims were Orange Coast College baseball coach John Altobelli, his wife Keri and daughter Alyssa.

Albotelli was named by the American Baseball Coaches Association as the National Coach of the Year in 2019.

Kobe Bryant and his 13-year-old daughter, Gianna "Gigi." This is gutting. 💔💔 pic.twitter.com/LyXxhWju3A

It is with the heaviest of hearts that we announce the passing of Orange Coast College head baseball coach John Altobelli. He was a coach, a colleague, a mentor and a friend at OCC for 27 years.

It’s impossible to even wrap my head around this. The 13th overall pick of the 1996 NBA Draft from Lower Merion High School near Philadelphia became a superstar of global proportions. Over his NBA career, this man did it all. The NBA legend captured five NBA Championships with the Lakers, twice winning Finals MVP. The 18-time All-Star was named the league’s Most Valuable Player in 2008 and was named First-Team All-NBA 11 times, as well as All-Defensive First Team nine times. Both of Kobe’s jerseys ? the No. 8 he wore to start his career and No. 24 he wore at the end ? were retired by the Lakers and will hang in the Staples Center rafters forever.

Perhaps the most memorable game of Kobe’s Hall-of-Fame career came on January 22, 2006 when he dropped 81 points in a comeback win over the Toronto Raptors. It’s the second-most points ever scored in a game in NBA history.

In his final NBA game, Bryant erupted for 60 points against the Utah Jazz. In our lifetime, we may never see a farewell better than Kobe’s.

Bryant won an Oscar back in 2018 for the short film “Dear Basketball.”

The Lakers have not commented on the news as of this publishing. The team’s next game is schedule at home on Tuesday, January 28 against the Los Angeles Clippers.

Prior to Sunday’s game between the Houston Rockets and Denver Nuggets, a moment of silence was held in Mamba’s honor.

The Rockets & Nuggets hold a moment of silence for Kobe Bryant. pic.twitter.com/5LV9ddyi42

Just one day before his death, LeBron James passed Kobe for third place on the NBA’s all-time scoring list, and Bryant congratulated him on Twitter that Saturday night by saying, “Continuing to move the game forward @KingJames. Much respect my brother #33644.”

Social media flooded with thoughts and prayers for the fallen NBA superstar and the families of those killed in the crash.

Reports are that basketball great Kobe Bryant and three others have been killed in a helicopter crash in California. That is terrible news!

Kobe Bryant was killed in a helicopter crash Sunday as first reported by TMZ and confirmed by ESPN. He was 41.

Our hearts are heavy with extreme sadness at this time. We extend our deepest prayers, thoughts and condolences to the family of Kobe Bryant and those affected in today’s tragedy.

The loss of Kobe Bryant is unfathomable. The loss of his daughter Gianna, who had such a long life ahead of her, is even more heartbreaking.

The world lost a giant today
Rest In Peace Kobe Bryant. Also praying for the other passengers that we lost and their families.

I'm so sad and stunned right now. In Staples Arena, where Kobe created so many memories for all of us, preparing to pay tribute to another brilliant man we lost too soon, Nipsey Hussle. Life can be so brutal and senseless sometimes. Hold on to your loved ones. We miss you, Kobe

Literally this morning you reached out to me ….😔 I love you forever unc❤️ I love you pic.twitter.com/3oVgvKKUkm

The story is still developing, and the cause of the crash is under investigation.