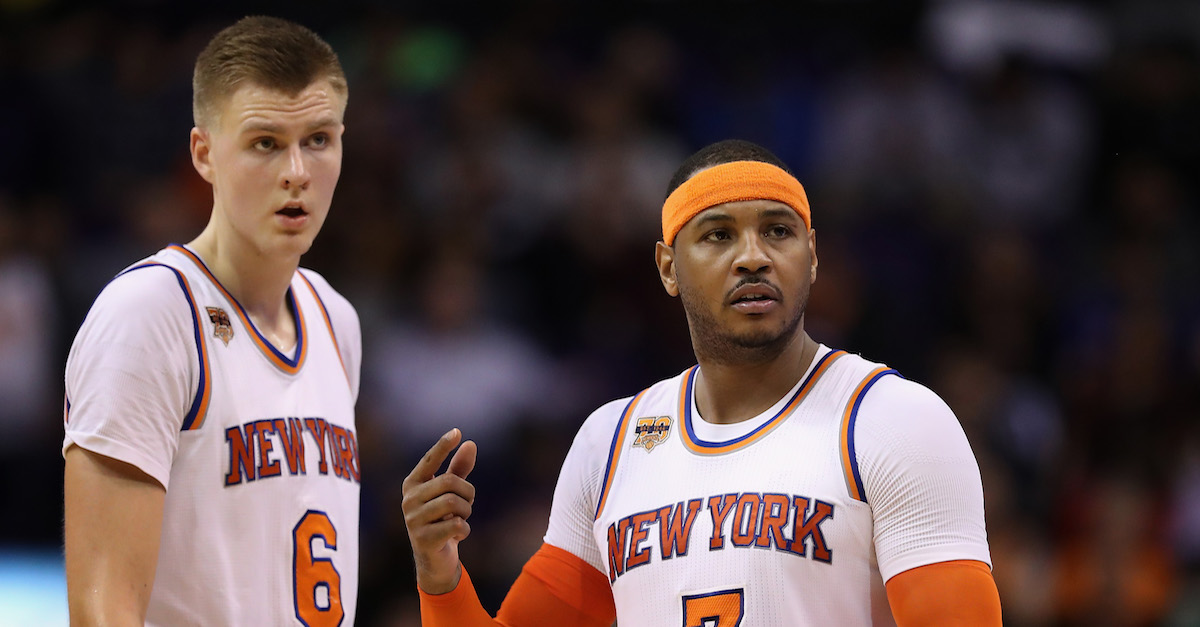 Christian Petersen/Getty Images
PHOENIX, AZ - DECEMBER 13: Kristaps Porzingis #6 and Carmelo Anthony #7 of the New York Knicks reacts during the second half of the NBA game against the Phoenix Suns at Talking Stick Resort Arena on December 13, 2016 in Phoenix, Arizona. The Suns defeated the Knicks 113-111 in overtime. NOTE TO USER: User expressly acknowledges and agrees that, by downloading and or using this photograph, User is consenting to the terms and conditions of the Getty Images License Agreement. (Photo by Christian Petersen/Getty Images)

Kristaps Porzingis, the sharpshooting Latvian who has developed into a fringe star for the New York Knicks is reportedly on the trade block ahead of the 2017 NBA Draft.

According to Adrian Wojnarowski, the Knicks are eyeing a top-four pick in trade discussions:

Knicks have made calls about Kristaps Porzingis, aiming for a top-four pick to get Josh Jackson. – @WojVerticalNBA https://t.co/zT5sHvQJGZ

On Kristaps, Phil said, "As much as we love this guiy, we have to do what's best for the club." Definitely bothered by blowing off meeting."

The Philadelphia 76ers seem intent on taking Markelle Fultz, but the Los Angeles Lakers (No. 2), Boston Celtics (No. 3) and Phoenix Suns (No. 4) hold the next handful of picks.

The Lakers have reportedly been unwilling to move the No. 2 selection for Paul George, meaning they’ll likely be unwilling to even consider a Porzingis deal for that pick.

Boston has been targeting playmakers in recent years, and this seems to be the perfect opportunity to Danny Ainge to cash in at least some of his assets.

Reports had the Knicks offering Porzingis for Devin Booker and the No. 4 pick, but were apparently turned away.

Knicks have asked for Devin Booker and the #4 pick from Phoenix for Kristaps Porzingis – Ha Ha Ha. He is good but trust me not that good

With the draft less than 24 hours away, we’ll see if any team makes a blockbuster deal.