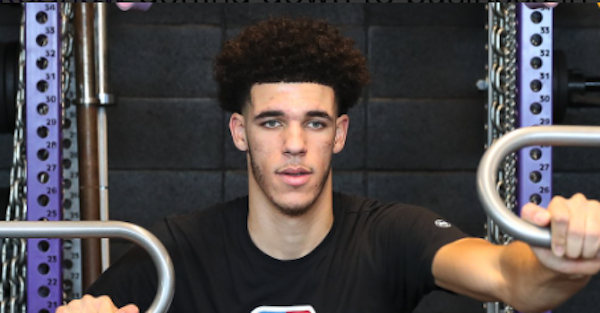 What’s better than Lonzo Ball’s fast-talking father, Lavar, essentially donning his son the next NBA great? Lonzo wearing a t-shirt with his face essentially taking over Jerry West’s spot as the logo.

Ball was drafted No. 2 overall by the Los Angeles Lakers. He’ll enter the league as a rookie and a target firmly on him.

Denver's Juan Hernangomez told @HoopsHype that Lonzo Ball will have a target on his back entering the NBA. Full Q&A: https://t.co/siAotNHMu3 pic.twitter.com/rLOU5BTyeS

Hernangomez was the No. 15 overall pick in last year’s draft by the Nuggets, and while he isn’t a star in the NBA, his comments are quite interesting.

If a player of Hernangomez’s status thinks and says those things about Ball, it’s not out of the question to wonder whether several other players around the league feel the same way.

Once Ball enters the league next season, it will be worth monitoring whether opposing players are extra physical or aggressive with Ball because of his father.

It’s not necessarily Lonzo’s fault that his dad is over the top with his marketing approach, but other players around the league might not feel the same way.

For a team that just had one of its worst seasons in franchise history, just getting to .500 would be ideal for the Lakers next season in Year 2 of the Luke Walton era and Year 1 of the Magic Johnson and Rob Pelinka era, but Lonzo’s dad has called his shot at a playoff spot:

Lavar Ball guarantees playoffs for the Lakers next year – bookmark it pic.twitter.com/EyNUEbfqf8

Now, though, the pressure is on Brandon Ingram, Lonzo, Julius Randle, Brook Lopez and company to make huge strides in 2017-18.

LaVar guaranteeing playoffs with this kind of roster is a bold take, something he hasn’t had shied away from in the past, and, unless the team adds Paul George this summer, it’s hard to see this as a realistic possibility.