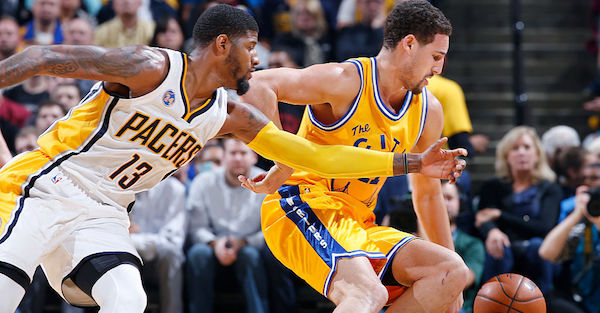 Joe Robbins/Getty Images
INDIANAPOLIS, IN - DECEMBER 8: Klay Thompson #11 of the Golden State Warriors goes for a loose ball against Paul George #13 of the Indiana Pacers in the first half of the game at Bankers Life Fieldhouse on December 8, 2015 in Indianapolis, Indiana. NOTE TO USER: User expressly acknowledges and agrees that, by downloading and or using the photograph, User is consenting to the terms and conditions of the Getty Images License Agreement. (Photo by Joe Robbins/Getty Images)

When the Indiana Pacers were shopping Paul George, they apparently made a call to the Golden State Warriors to gauge their interest in swapping George for Klay Thompson.

ESPN’s Adrian Wojnarowski mentioned the possible trade during his recent podcast with George, and he said the Warriors declined the trade and wanted to keep Thompson.

Below is the link to the full pod with PG and @wojespn, where Woj mentions that Indy asked Warriors for Klay Thompson & Warriors said no. https://t.co/Qm5Y9EPm8P

Instead, the Pacers traded George to the Oklahoma City Thunder for Victor Oladipo and Domantas Sabonis.

It probably didn’t hurt to try to trade for Thompson, but the Pacers had absolutely zero leverage in making trade demands since George made it clear he wasn’t re-signing with the Pacers after 2017.

George also indicated he’d like to sign with the Los Angeles Lakers before the 2018 season, so it wouldn’t make sense for the Warriors to give up Thompson?who’s under contract through the end of the 2019 season?for a player likely to leave after next year.

Even if the Warriors deemed George a better overall player than Thompson, they wouldn’t want to sacrifice Thompson’s elite perimeter shooting for George. Thompson shoots 42 percent from 3-point range for his career, while George shoots 37 percent.

A lineup consisting of Steph Curry, Kevin Durant, Draymond Green and Paul George would’ve been lethal too, but it wasn’t worth the risk for the Warriors.