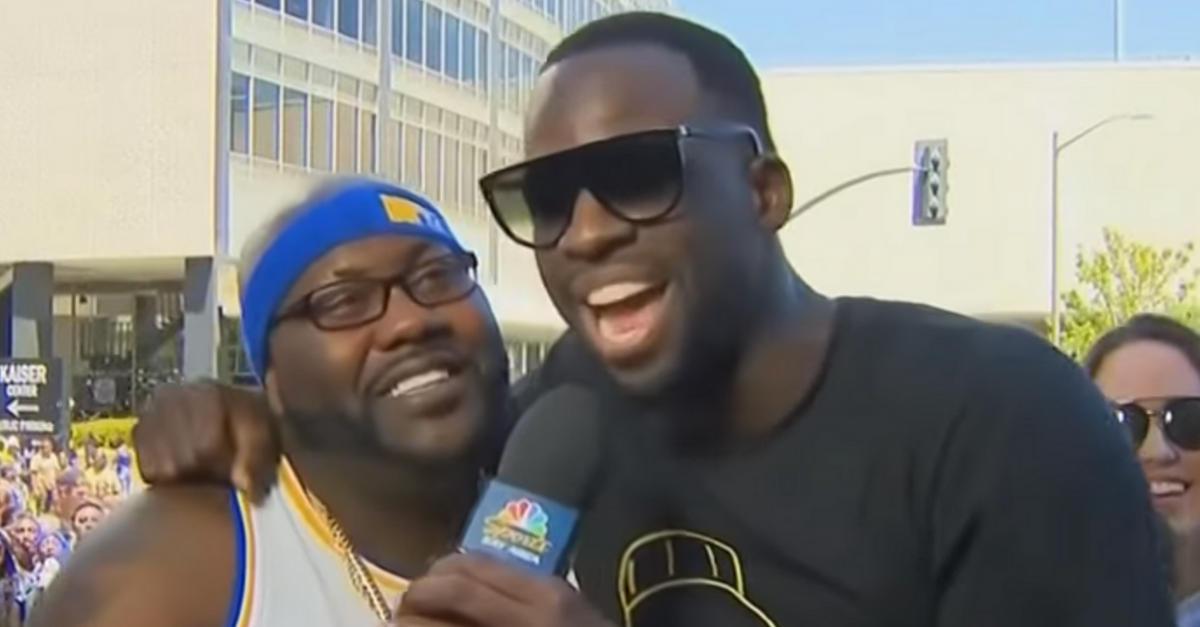 ?The fact of the matter is we?re just cut from a different cloth. There?s a lot of guys in this league, they are soft,? the All-Star and now three-time NBA champion said on the broadcast. ?I told one of them dudes from the Cavs after the game, he tried to shake my hand, I said, ?Tristan, we ain?t cut the same.??

Green did not shake Thompson?s hand following the Warriors? four-game sweep of the Cavs, either.

“I don’t fuck with you”… Dray to TT after the Finals Sweep… @Sixfever pic.twitter.com/ald7LkRckz

Of course this was going to end well, right? Nothing can happen between two grown men who have feuded before after playing against each other in four-straight NBA finals, right?

Fast-forward a few weeks, and we now have one of the greatest NBA offseason rumors to date: Thompson allegedly punched Green at a post-ESPYs party in Los Angeles earlier this month.

Or, as according to Bossip, the leader in breaking the story, Thompson ?socked him with a two-piece.?

A big shout-out to The Big Lead’s Jason McIntyre, a real, credible source, for breaking it down on Twitter:

Draymond went up to apologize to Tristan for what happened after G4 of the finals. TT said ‘nah man’ and Draymond tried again, ‘come on, I didn’t mean it’ and then WHAP, Tristan leveled him with a punch. Draymond didn’t go down.

Draymond Green was not the aggressor, he was trying to make peace. Tristan felt embarrassed by the end of the Finals diss moment and just unloaded. Couple players i spoke here in LA/on social media went with, "about time"

Apparently this all happened inside LA nightspot Delilah during a private party and allegedly superstar teammates LeBron James and Kevin Durant helped break it up.

Wait, did this actually happen? Something doesn’t feel right here.

All I have to say about this Draymond vs. Tristan… I was at their ESPYs after party and didn’t see any altercation. Dray was sitting on Lebron & KD’s side while Tristan & Simmons were on the other. An NBA player doesn’t get punched in 2018 and we hear about it 2 weeks later.

It is understandable to side with Victoria here, even if she wasn’t at the same party. How does this happen and we are just hearing about it? Why did McIntyre sit on this story until someone else broke it? It’s a bizarre story, but so is the feud between the two players.

Then again, there has to be a solid list of those who want it to be accurate.

But no matter how bad a lot of people want this to be true, though, more details probably need to emerge to make it official. And if this actually did happen, grab the popcorn for what might come next.

NBA drama is the best drama.