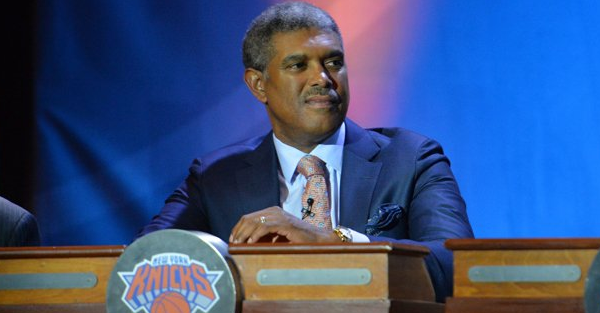 They should change the meaning of this noun to: Knicks — a perpetual state of angst brought on by indefensible decisions; incredibly wretched stupidity; hopeless.

Fans may have been Knicked once again.

The New Yorkers, who have not won a championship since just after Atari (remember them?) kicked off its first generation of video games (the Knicks won in 1973), have reached into the living hell that is the Sacramento Kings front office for its next general manager.

League source confirms the Knicks and Scott Perry have reached an agreement on a deal for Perry to become the team's new GM.

“Who?” would be a logical reaction.  So, here is some background:

Perry was the Kings’ vice-president of basketball operations, but here’s the weird thing  — he’s only been in the job since April, as Vlade Divac’s right-hand man. Divac, who runs the King’s front office, is the man who made the astute basketball decision to trade Demarcus Cousins for a bag of socks (does anyone remember who the Kinds got in that deal?) and a couple of draft picks. Yeah, he was ripped for that.

RELATED: Championship winning GM said hello no to the Knicks.

He, or someone in the Kings hierarchy, must have recognized the folly of that move, so they brought in Perry, who oversaw a successful draft and free agent signing period that netted the Kings PG D’Aaron Fox, small forward Justin Jackson and center Harry Giles — – all first round picks in this past NBA draft. He then signed George Hill, Vince Carter and Zach Randolph for veteran depth, though it’s questionable how much left the later two have since their combined age (75) takes them well past the age of social security.

An NBA executive called Perry “one of the top talent evaluators” in the game, according to the New York Post.But the problem is the Knicks have little talent and keep “knicking” themselves by signing mediocre players like Ron Baker to  a two-year, $8.9 million deal. Maybe Perry can use those talent skills to unearth a gem or two in a Carmelo Anthony trade, but he has little to work with and no cap space. And he’s not going to have autonomy because the Knicks refused to give that to David Griffin, the former general manager of the Cleveland Cavs who has actually won a championship.

But even if Perry does work a miracle, there is still one undeniable piece of treachery he has to navigate:

He works for a man in Steve Mills who have Tim Hardaway a $71 million contract, and Mills works for the madman of hoops, James Dolan, who makes Vlade Divac look rational and sane.

Wonder how long it’ll be before Perry is out of there?