Playing in the National Basketball Association is a dream for many. With the NBA draft taking place tonight, that dream has the potential to be realized by a number of playmakers looking to get to the next level and begin their professional careers.

Some players like Steph Curry graduate college after four years and then declare for the NBA Draft. Others like Anthony Davis, Zion Williamson and Anthony Edwards play for a single year in the NCAA before moving on to the pros. And on the completely opposite end of the spectrum, players like LeBron James and LaMelo Ball completely passed on college hoops and became professionals immediately after high school or shortly after their prep career.

But one NBA hopeful in the 2022 Draft found an even odder way of making it to the pros. 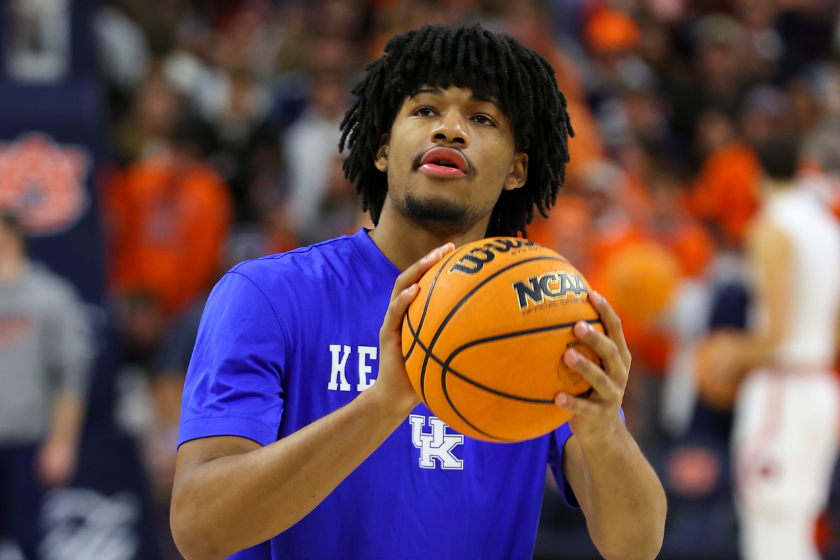 Shaedon Sharpe hails from London, Ontario, Canada, and has taken a slightly unorthodox path to draft eligibility. The 6-foot-6 shooting guard started high school in Canada at H.B. Beal Secondary School. He moved his sophomore year to Sunrise Christian Academy in Bel Aire, Kansas. However, he wasn't able to break through that year. Finally, in his junior season, Sharpe made a splash at Dream City Christian Academy in Glendale, Arizona.

After graduating early, Sharpe committed to college ball with the Kentucky Wildcats. It was his intention to redshirt the first season and play next year, but he never took the court. And now, without having actually completed a dribble for John Calipari's Kentucky, Sharpe is entering tonight as a solid NBA Draft prospect despite him being a relative unknown.

ESPN rankings had Sharpe as the number one overall prospect coming out of high school, making him the first No. 1 recruit to commit to the Wildcats since Nerlens Noel a decade ago. But once he declared himself eligible, he forwent the remainder of his college eligibility.

So, without having stepped foot on the court in March Madness, why would the 19-year-old declare? Well, it's simple. It was becoming very clear that his name was being tossed around as a lottery pick. And further, as a potential top-five draft pick. If it seems that you have that guarantee, why not keep an eye on those NBA mock drafts and see how high your stock can rise?

The scouting reports are kind. He boasts great athleticism, ball-handling skills, shot selection, the ability to fool you with a step-back, and a 7-foot wingspan that should bode well on the defensive side of the ball. In the 2021 Nike Elite Youth Basketball League, Sharpe averaged 22.6 points, 5.8 rebounds and 2.7 assists -- and those are pretty consistent with the numbers he put up in high school.

Which NBA Team Takes a Gamble on Sharpe?

RELATED: Paolo Banchero was Showing Off His NBA Potential Before He Arrived at Duke

Where will the five-star recruit play next season? That certainly remains to be seen. With Jabari Smith, Chet Holmgren, and Paolo Banchero likely to go top three to Orlando, Oklahoma City, and Houston respectively, it's hard to see Sharpe going to the Kings at four or Pistons at five, but anything can happen.

The player comparison we're seeing most is to Paul George -- a true two-way player and an all-but guarantee to go in the first round. The scenarios are interesting. The New York Knicks have shown some interest, but they also are showing interest in Jaden Ivey. Both would be good additions in New York, but there's something interesting about a Shaedon Sharpe and RJ Barrett pairing. While NYK finished under .500 last year, Barrett's progress was impressive, and he's quickly becoming a top-notch scorer in the league. Either way, the Knicks would likely need to trade up from 11 in order to make that happen.

Another interesting prospect is Portland taking him at number seven. We obviously don't know how Sharpe's skills will translate to an NBA team, but under the tutelage of Damian Lillard, the Blazers could turn him into a force. But will he come off the big board before Arizona's Bennedict Mathurin or Australia's Dyson Daniels?

Regardless, Shaedon Sharpe is a top prospect who looks to destined to go high in this year's draft. So whose hat will he be wearing tonight? Can he stick in the top 10, going to Detroit, Portland, or even New Orleans? Or will he fall out of the top 10 to someone like Charlotte? Only time will tell. Thankfully we'll have the answer, live from Brooklyn.