How many teams has Kevin Durant played for? If you said "three", then you need to read the rest of this.

Durant played eight seasons for the Oklahoma City Thunder before he left to play three seasons with the Golden State Warriors. In 2019, Durant took a cross-country trip to sign with the Brooklyn Nets, much to the chagrin of New York Knicks fans, and has been there since.

But Durant was drafted by and played one season for a fourth team: the Seattle Supersonics.

The Sonics franchise began in 1967 and built a name for themselves with talents like Lenny Wilkens and Spencer Haywood. The Sonics would eventually break through and win a title in 1979 with a team led by Dennis Johnson, Jack Sikma and Gus Williams. The team also made the NBA Finals in 1978 and one more time in 1996.

So how did the last act of the 40+ year history of the Sonics hoops play out? Glad you asked.

What Happened to the Seattle Supersonics? 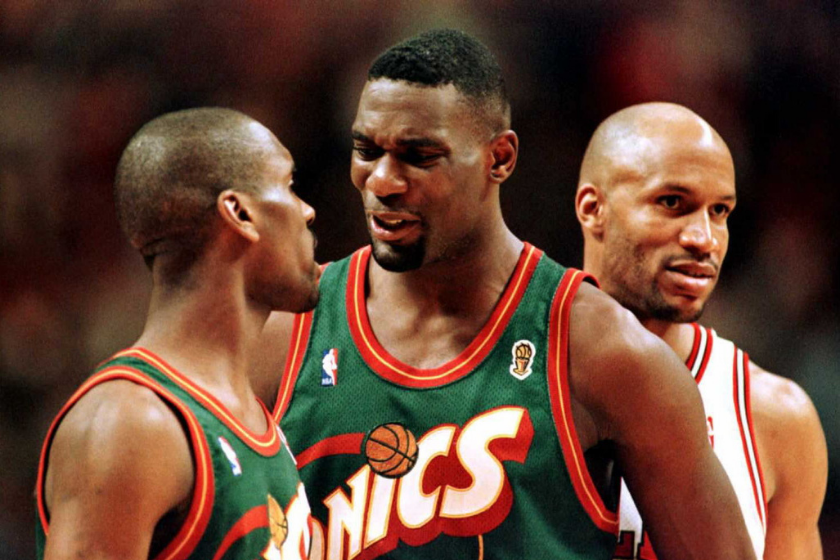 This team was quite simply a juggernaut. They won 64 games, which was 10th most all-time in 1996. The Sonics had the highest points per game average in the Western Conference with 104.5 points. They led the league in steals and took the fourth most three-pointers.

Seattle stormed into the playoffs as the No. 1 seed and defeated the Sacramento Kings in five games. Even more impressively they swept the two-time defending champion Houston Rockets in the second round. The Utah Jazz pushed the Sonics to a seventh game in Seattle in the Western Conference Finals. The Sonics won this decisive game behind a 26-point, 14 rebound performance from Kemp.

It's easy to imagine there couldn't have been a rain cloud in the sky for Seattle at this point. However, Michael Jordan and the 72-win Chicago Bulls were waiting for them in the Finals. Seattle would drop the first three games before fighting back to take Games 4 and 5 in Seattle. As the Lakers, Blazers, Suns and later Jazz would learn, there's no beating Jordan and Seattle lost the series in Game 6 falling 87-75.

From there, the three most important parts of this historic season began to carve a path for departure, with the ultimate exodus being a franchise move to Oklahoma City. 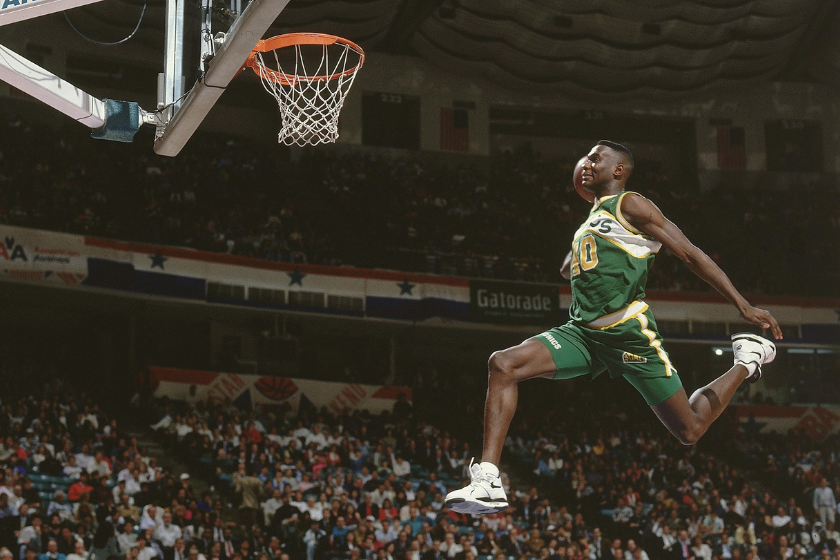 Seattle drafted Shawn Kemp 17th overall in the 1989 NBA Draft. Kemp became a full-time starter in the 1992-93 season and made five straight NBA All-Star teams with Seattle. Over this time, Kemp averaged 19 points and 11 boards with 3 stocks (steals + blocks) per game. He also made three All-NBA 2nd Teams.

The beginning of the end was when Seattle signed free-agent center Jim McIlvaine to a contract that exceeded Kemp's in the summer of 1996. The power forward was reportedly so upset by this that he requested a trade, but he played out the 1996-97 season with the Sonics.

In the summer of 1997, Seattle would deal Kemp in a three-team trade that sent him to Cleveland and Vin Baker to Seattle. Kemp's time as a Cavalier is mostly remembered for his post-lockout weight. He still averaged 19 points and  9 rebounds with two blocks per game in three seasons in Cleveland and made one All-Star team.

Next up was the man in charge. 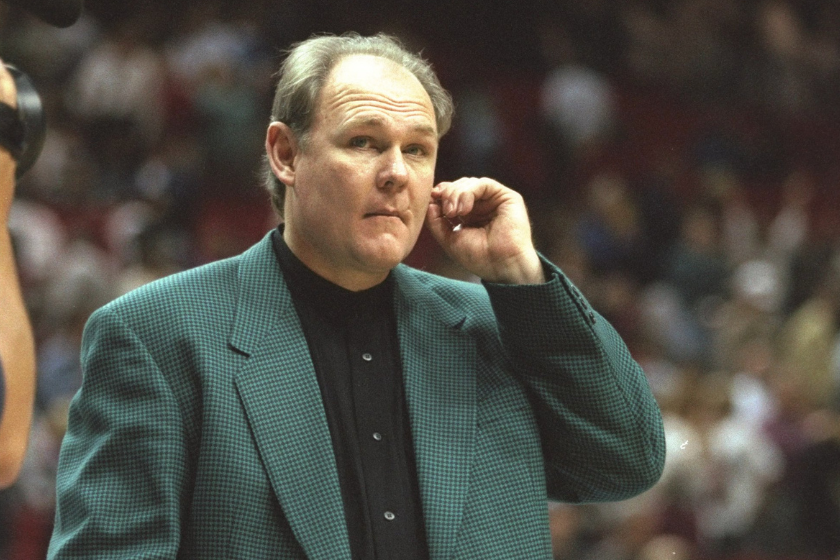 George Karl had a career record of 384-150 during his time with the Sonics. That is a .719 winning percentage, which would be No. 1 all-time over Phil Jackson. In the six full seasons as Seattle's head coach, Karl's teams never won fewer than 55 games and won more than 60 games three times.

Unfortunately, Karl's postseason record with the Sonics was only 40-40. His reigning Western Conference Champions submitted back-to-back disappointing seasons. The 1996-97 team lost in the second round to the Houston Rockets with Charles Barkley, Hakeem Olajuwon and Clyde Drexler combining for 66 points in Game 7. In the 1998 playoffs, the Sonics lost in the second round to the Los Angeles Lakers led by Shaquille O'Neal, who averaged 31 points, 10 rebounds and four assists and four blocks in the series.

That offseason Karl was fired. In a few more seasons, the next pillar would fall. 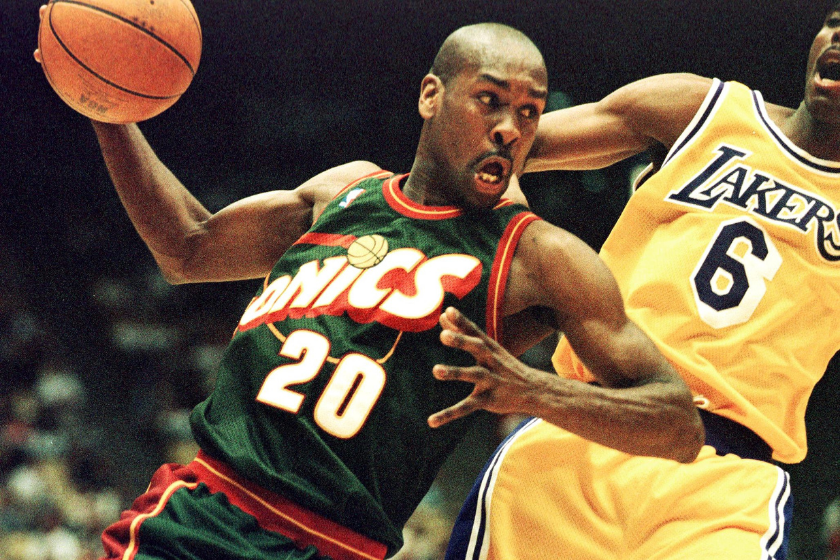 Seattle took Gary Payton with the No. 2 pick in the 1990 NBA Draft. Payton became a full-time starter on Day 1, but didn't fully take off as a player until the 1993-94 season. That season began a five-year run as an All-Star for Payton, who would make nine All-Star teams over his career as a Sonic.

Payton averaged 22 points, 5 boards and 8 assists with over two steals a game from 1994 to 2002. He also made an All-NBA team every year during this run (He made the First-Team twice, Second-Team five times and the Third-Team twice). Payton also won the Defensive Player of the Year Award in 1995-96.

Payton lasted with the Sonics until 2003 but never won another playoff series in Seattle. During the 2002-03 season, Seattle traded Payton to the Milwaukee Bucks in a package headlined by Ray Allen.

Once Payton was gone the Sonics transitioned into the worst thing a NBA team can be, mediocre.

Seattle Falls to the Middle of the Pack 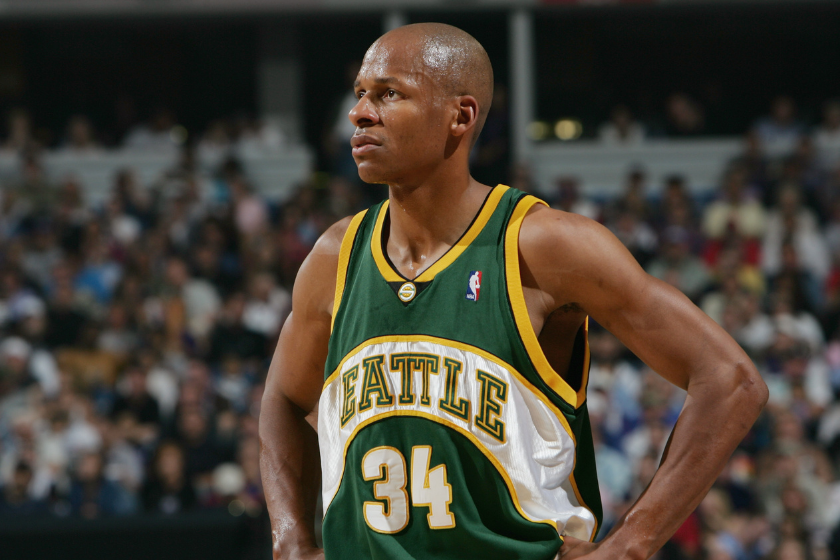 The Payton for Allen trade was supposed to give Seattle a younger face of the franchise. Allen's singular performance certainly delivered. In four-plus seasons as a Sonic, Allen averaged 25 points a game and made four All-Star teams.

Seattle's full roster did not have as much success though. From 2003 through 2007 the Sonics averaged only 39 wins a season and won a single playoff series. Things were bad.

The future would seem bright, but unfortunately not for Seattle.

The Move to Oklahoma City 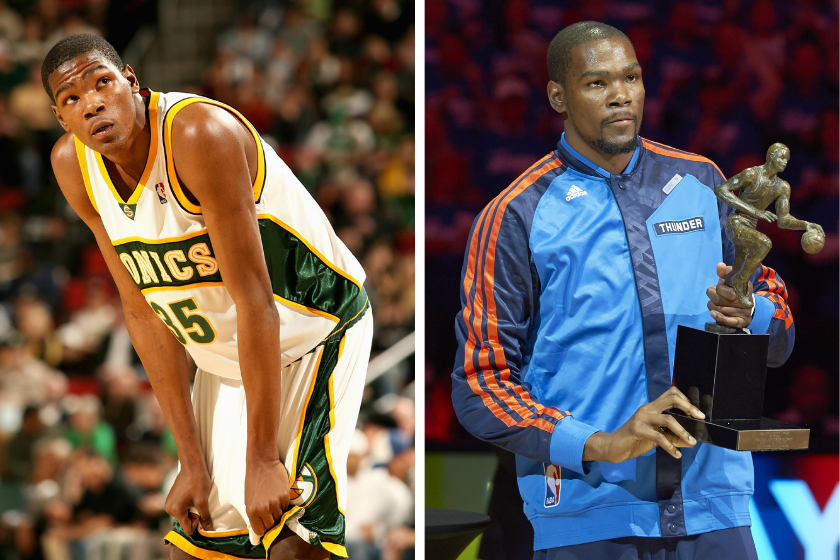 The 2007 NBA Draft saw the Sonics select Kevin Durant No. 2 overall. The team then traded Ray Allen to the Boston Celtics for the No. 5 pick and took Jeff Green. The Sonics went 20-62, the fewest amount of wins in franchise history. Durant averaged 20 points, four rebounds and Green averaged 11 points a game, but both shot under 30 percent from three in their rookie seasons.

And then, the Seattle Supersonics ceased to be.

The owners made the decision to move the team to Oklahoma City and become the Thunder. The team drafted Russell Westbrook that summer and would win 50 games by the 2009-10 season. The following season they made the Western Conference Finals, and then the NBA Finals in 2011-12.

And that's what happened to the Seattle Supersonics. Made the Finals in 1996, and made it back 16 years later in a new city and under a new name, like a mob informant. There's talk of an expansion team coming to Seattle at some point, but for now the fans in Washington can only remember the times of Kemp, Payton and Karl, while cheering on the Seahawks, Sounders, Mariners, WNBA Champion Storm and the newest NHL franchise, the Seattle Kraken. The latter of whom play at the Climate Pledge Arena, the renovated former home of the Supersonics that used to be called KeyArena. Sure it's not a new arena, but in a way, it's perfect for Seattle.

Perhaps, as Seattle reclaims its place in the professional sports world, the Supersonics can return to the NBA. For the moment, those rumors about NBA expansion in Seattle and Las Vegas remain rumors. But one can dream...

MORE: It's Time: Seattle Deserves an NBA Team Once Again