NFL preseason is underway, training camps are in full swing and the team building portion of the offseason is mostly over. Teams are especially all set at quarterback, the most important position in sports, which makes the case of quarterback Jimmy Garoppolo and the San Francisco 49ers even more interesting.

Garoppolo has been the starter in San Francisco (when healthy) for the past 4.5 seasons. However, the Niners are moving in a different direction as they have named Trey Lance their new starter, and star wide receiver Deebo Samuel has asked for a trade. San Francisco head coach Kyle Shanahan has also given Garoppolo and his agent permission to speak with other NFL teams to find a new home. It's not a trade rumor when the team you're playing for is actively trying to help you leave town.

It would seem to be an easy solution. Garoppolo is a starting-caliber NFL QB and he needs a job somewhere. However, it's proving to be more complicated than that.

How Did We Get Here? 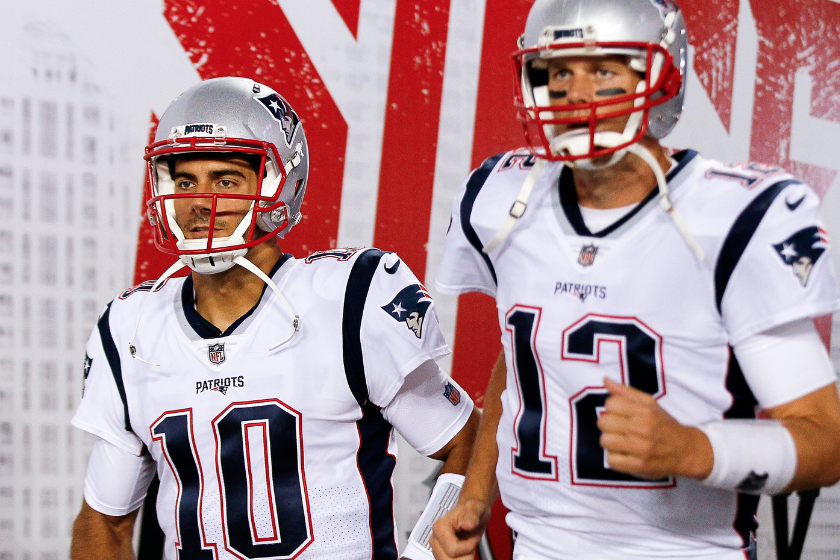 The first Jimmy Garoppolo trade, which sent him to San Francisco, is one of the more shocking moves in NFL history. The New England Patriots sent the QB to the 49ers for a 2nd round pick in October 2017. This was unexpected because New England had been rumored to turn down previous offers consisting of a first-round draft pick (if not multiple firsts) for Jimmy G.

The deal paid off immediate dividends for San Francisco as Garoppolo led the 49ers to a 5-0 record to end the season. That offseason, the 49ers inked their new starter to a 5-year deal with maximum earnings of $137.5 million for Garoppolo. Unfortunately, the good vibes ended soon after when Garoppolo tore his ACL in Week 3 of the 2018 season vs. the Kansas City Chiefs.

The winds shifted again for Garoppolo and the 49ers in 2019 as the quarterback started every game. San Francisco also made it to the Super Bowl and was leading 21-10 in the fourth quarter, before:

Lead the @Chiefs to an all-time Super Bowl comeback?

That's how you get a 10-year extension. @PatrickMahomes pic.twitter.com/m2lsu0NarM

A pattern then seemed to be forming. Garoppolo suffered multiple injuries in the 2020 season and only started six total games (going 3-3). This seemed to be a final straw for San Francisco. The team traded the No. 12 pick in 2021, first-round and third-round picks in 2022, and a 2023 first-round pick for the No. 3 pick in 2021. This pick was used on North Dakota State quarterback Trey Lance, setting up the path for Garoppolo's departure.

The 49ers were in an interesting spot for the 2021 season though, as Lance had missed almost all of his last college season due to the COVID-19 pandemic. A team with Super Bowl aspirations would have been hard-pressed to start a rookie in that situation at the most important position.

Garoppolo again rebounded health-wise and started 15 games. The 49ers also made it to the NFC Championship game vs. the Los Angeles Rams, by defeating Aaron Rodgers and the Green Bay Packers. Garoppolo threw an interception with two minutes remaining and they lost 20-17.

The Good and the Bad of Jimmy G Under Center 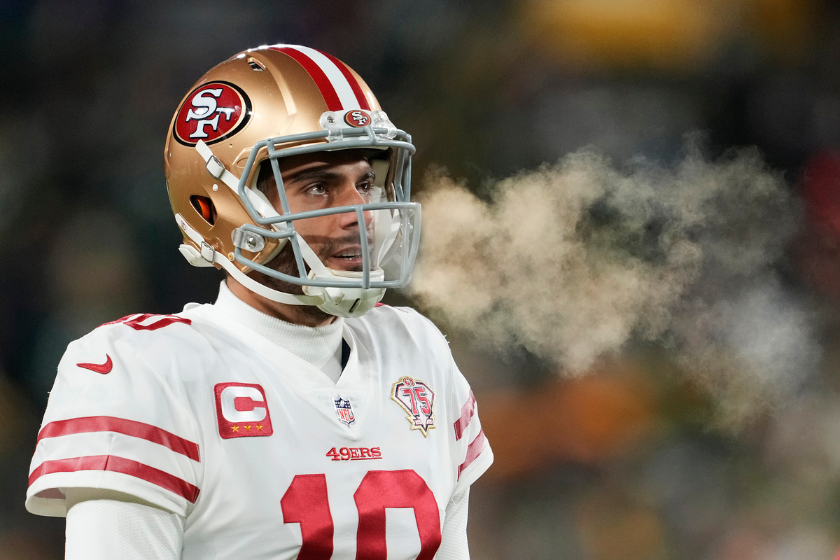 Garoppolo obviously now needs a new team to play for, but the question is what kind of player is he at this point?

So it's a pretty mixed bag for Mr. Garoppolo. The other difficulty for his situation is while about $27 million is not an outrageous cap hit for a starting quarterback, most teams have filled this need already. If you're looking for your starting quarterback on August 1, then usually your offseason plan went awry to say the least.

There are also very few teams that have the available cap space at this point to fit in Garoppolo's salary, even with it being as reasonable as it is. 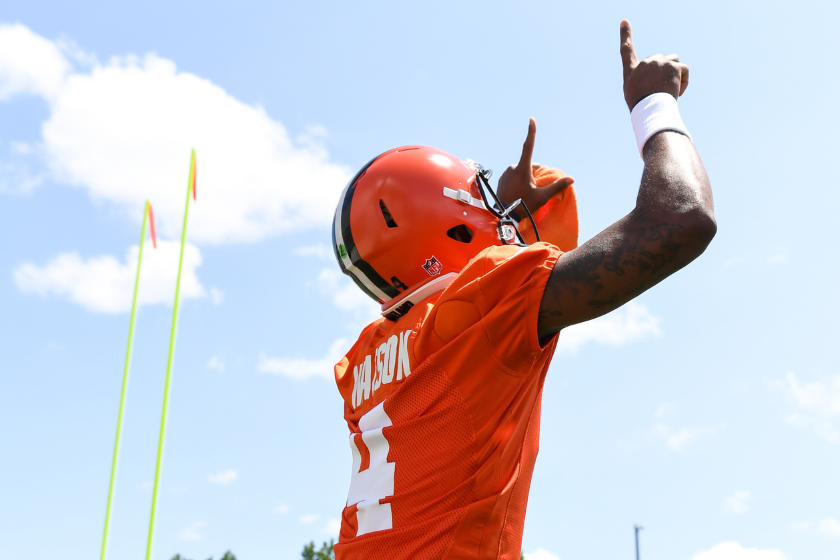 The cap space, it's all gone. Again, training camps have begun. It'd be borderline negligible if your team was leaving $25 million or more in cap space for a potential quarterback to shake free. In fact, the last time a starting quarterback was signed so late was Cam Newton's deal for $1 million with the Patriots.

Here are the top five teams in terms of open cap space (according to Spotrac):

Notably missing from this list are the New York Giants and Seattle Seahawks, both of whom could use a veteran quarterback on their sidelines. Giants head coach Brian Daboll would love to have Jimmy G as insurance to Daniel Jones, and the Seahawks will be spending their first season in nearly a decade without Russell Wilson under center as he suits up for the Denver Broncos.

But let's look at the true potential landing spots for the soon-to-be former 49ers quarterback.

The Bears are an easy cross-off because they are over $10 million away in cap space needed for a Garoppolo trade, and they just used a first-round pick in 2021 on Justin Fields. The Cowboys and Raiders have re-signed their starters Dak Prescott and Derek Carr to contract extensions, and the Panthers just traded for Baker Mayfield, who is coming off shoulder surgery, to compete with Sam Darnold.

The Carolina QB room might not be the dream of Canton, but there are also only so many resources you can put towards a position. It feels like the Panthers are good with what they have for 2022. 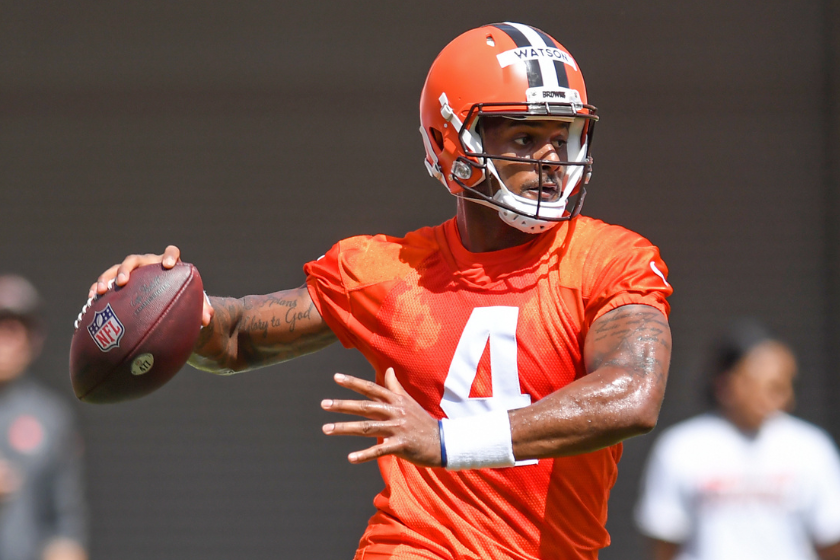 Cleveland has tried to acquire Garoppolo before. It's only around a six-hour drive from his hometown in Illinois. And with former Houston Texans' QB DeShaun Watson's six-game suspension following his 20+ sexual assault cases, they have a need for a quarterback they can write in pen as their Week 1 starter if they feel Jacoby Brissett isn't the guy.

The big issue is the price tag, both in terms of compensation for the 49ers and for Garoppolo. Yes, the Browns have nearly $50 million in cap space in 2022. However, their current projected 2023 cap is more than $15 million over the cap. Rolling over the surplus they have now to the next year would make the 2023 payroll a lot more palatable.

Trading for Garoppolo takes their rollover for next year down to a little over $21 million. Still a good number to take to the next season, but is Garoppolo worth that cap charge? Especially when you factor in how Cleveland is the only team that can afford this trade without any type of cap maneuver.

San Francisco's best interest is to find a way to convince Cleveland that this trade is in the Browns' best interest. Because the next best outcome for the 49ers is cutting Garoppolo for the cap savings and allowing him to sign with any team he wants.

And wouldn't you know it? The 49ers rivals in Washington State have a need at quarterback and just made a sizeable investment in their offense. Should be a fascinating next few weeks in the Bay Area.