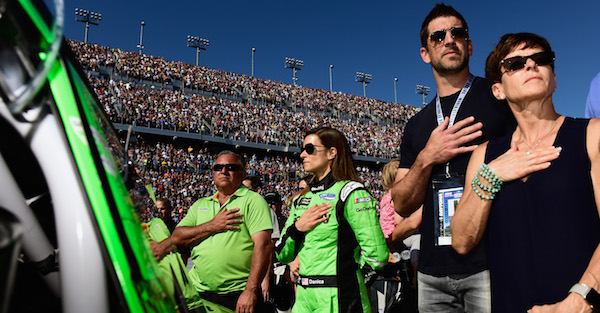 Aaron Rodgers and Danica Patrick are in the early stages of their high profile relationship, but trouble might already be brewing between Rodgers and Patrick’s father, T.J.

Rodgers attended the Daytona 500 with Patrick and her family, and a picture was taken of Rodgers during the national anthem with his hand over his heart. T.J. Patrick decided to point out how NASCAR drivers and fans stood for the national anthem with their hands over their hearts as opposed to many NFL players who have protested during the anthem.

Patrick posted a comment on Facebook, and even though they’ve since been deleted, Terez Owens captured screenshots of the posts.

Related: Danica Patrick posts of picture of how she and Aaron Rodgers are enjoying their offseasons

Here’s what Patrick commented on the picture of Rodgers at the Daytona 500:

Rodgers was supportive of his teammates and fellow NFL players protesting during the anthem last season, but those kinds of protests don’t happen in NASCAR.

Those comments might lead to an awkward conversation between the two next time they see each other.