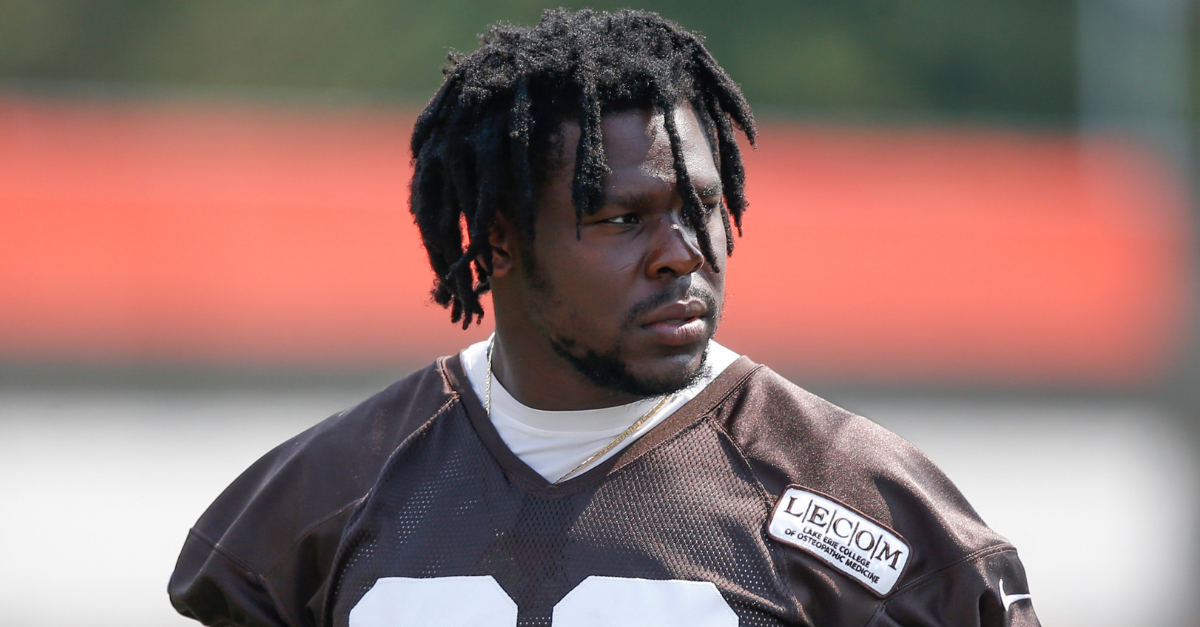 BEREA, Ohio (AP) ? Cleveland Browns defensive end Chad Thomas was immobilized on the field and taken to a hospital after suffering a neck injury Monday during training camp.

A team spokesman said Thomas, a third-round pick in 2018, was taken to University Hospitals for further evaluation and testing. He had movement and feeling in his extremities before he was transported by ambulance.

“Just precautionary,” coach Freddie Kitchens said after practice. “Anytime something happens like a stinger or any issues like that, you want to be more cautious than anything, and that’s what we’re doing.”

Tense moment. All players around Chad Thomas who was immobilized. and carted off #Browns Not sure how he was injured pic.twitter.com/K0GeZzbd5X

Thomas appeared to absorb a blow to his right shoulder and head area during a play. The 6-foot-5, 280-pounder stood up but then went to the ground, where he was treated by Browns medical personnel.

As his teammates and fans at camp watched somberly, Thomas was put on a backboard and carted away.

“It’s never a moment at any point in time in any sport ? or in anything ? that’s a sight that anybody wants to see,” wide receiver Jarvis Landry said. “Chad’s in our prayers.”

Thomas appeared in four games for the Browns last season. He’s expected to be in Cleveland’s defensive line rotation this season.

“In our game, that’s reality,” he said. “Sometimes that happens during the course of a game and mentally we’ve got to keep moving forward. At the end of the day, this is still practice, so you don’t want to see your teammate laying there.

“But again, the protocol for anything like that is sometimes it looks worse than it is. Not to make any light of it. It’s a serious nature, but Joe (Sheehan, team president of player health and development) and his staff did everything to protocol to make sure there was no damage done after the fact.”

Update on Chad Thomas: #Browns announced he has a neck injury and is being evaluated at University Hospitals. He has feeling and movement in all of his extremities.

Guard Joel Bitonio said he was encouraged to see Thomas get up after the play.

“We kind of saw him moving around out there, so we were hoping it wasn’t too serious,” Bitonio said. “But anytime they bring the stretch board out and put someone down, it’s great to hear that he’s moving and they’re just doing extra tests now to make sure everything is OK.”